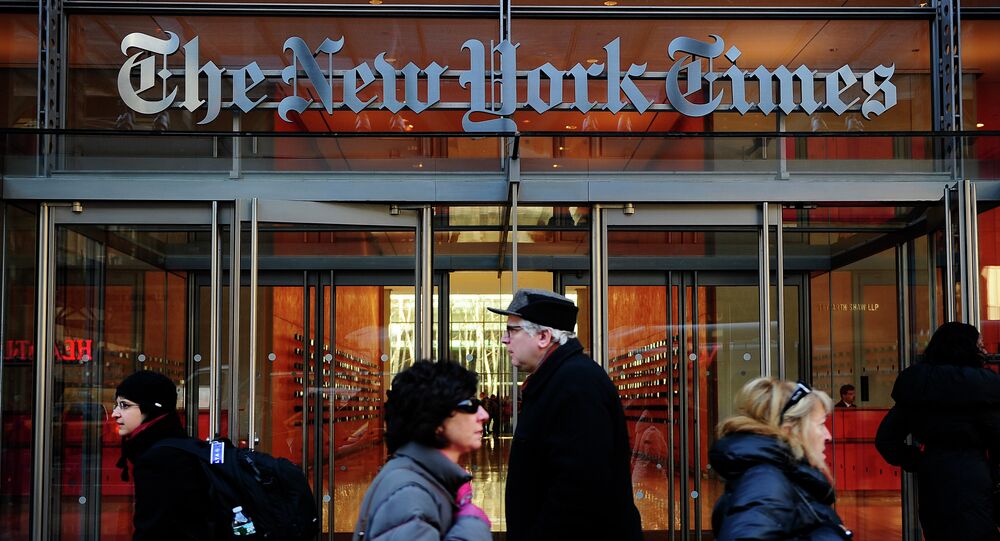 The New York Times made an embarrassing error on Tuesday, publishing a story about former Donald Trump presidential campaign chair Paul Manafort that falsely claimed he passed election information to a Russian contact when he really passed them to Ukrainian ones.

© REUTERS / Brendan McDermid
Oops! Unredacted Manafort Court Filing Reveals Kilimnik Meeting
However, the corrected article also notes that Manafort did reach out to Oleg Deripaska, but with an offer of "private briefings." The Times corrected the error and published a retraction, but you could be forgiven if you missed it: the original story was front-page news and dominated the airwaves Tuesday and Wednesday.

The retraction? Not so much.

Radio Sputnik's Loud and Clear spoke about the snafu with Dan Kovalik, a human rights and labor lawyer and author of the new book "The Plot to Control the World: How the US Spent Billions to Change the Outcome of Elections Around the World."

https://www.spreaker.com/user/radiosputnik/new-york-times-got-key-detail-of-new-rus
"This is par for the course," Kovalik said, noting that "the whole Russiagate scandal seems ginned up as a means to support continued aggression — not just against Russia, but against the rest of the world."
© AP Photo / J. Scott Applewhite
Russian to Conclusions? NYT Misreports Manafort’s Ukraine Ties as Russian

"New York Times has been one of the publications that has jumped on that bandwagon, and they jumped too quickly with this story, and now they've had to eat their words," he said, noting they "did so quite sheepishly and tried to bury" their mistake.

But people won't read the correction and won't know it even exists unless they go looking for it. Host Brian Becker said the correction should've been equal in headline size to the original front-page story, given the amount of damage that propagating a false narrative like that can do.

Kovalik noted that such is the case in the event of libel. "That would be the remedy. If you libel someone — and by the way, they did libel Manafort — you're supposed to make a correction on the untruth you told in the same way you told the untruths, so that people can find it out and so the record can be truly corrected. But here they made no effort… because it goes against the narrative that the New York Times itself has been ginning up now for many, many months."

Kiriakou noted that the article only further verified what Manafort had been saying all along: he'd not been colluding with Deripaska and had no political relationship with him. So the New York Times effectively called Manafort a liar and then buried the retraction.

Kovalik said that it should have been obvious that the story was about Manafort's connections with Ukraine, as everything of substance produced thus far about Manafort has concerned Ukraine, and "most of those connections" had to do with "trying to get Ukraine to be more friendly and more connected with the West, not to Russia… so the whole narrative starts to fall apart."

Kovalik noted that the much-maligned "Russian oligarchs," today archetypes of terror in US rhetoric, were hailed by the US press and supported by the US state in the 1990s. "The New York Times of the world supported [former Russian President Boris] Yeltsin, who sold the entire country — or more accurately gave the entire country — away to Russian, and by the way, United States oligarchs. And yet now, these are people who we are supposed to fear."

Deripaska, who made his fortune buying up aluminum plants for cheap after the dissolution of the Soviet Union in late 1991, is a rival of both Manafort and Putin. Manafort owes him a repayment of a $10 million.

Putin's rise to power was predicated on reining in the power of the oligarchs, meaning he and Deripaska rarely see eye-to-eye. In June 2009, Putin called him and other factory owners "cockroaches" and forced them to sign agreements not to shutter their factories in the crisis-hit town of Pikalyovo.

"You have made thousands of people hostage to your ambitions, your lack of professionalism — or maybe simply your trivial greed," Putin told Deripaska and two other businessmen, Reuters reported. "Where is the social responsibility of business?"

That's not how friends talk to one another, especially not in Russia.

"They treat Russia as if it's a small town, as if all Russians are the same and all Russians know each other. It's a country with 11 time zones — it's gigantic. To try to lump all these Russians in together — and by the way, there's a lot of ethnicities beyond Russians in Russia as well — is just infantile. And it's also insulting; we would never accept that in the United States or for US folks to be characterized that way."

Manafort Suffering From Depression, Anxiety Due to Conditions in Jail - Filing

Manafort Not Requesting Hearing on Breach of Plea Agreement