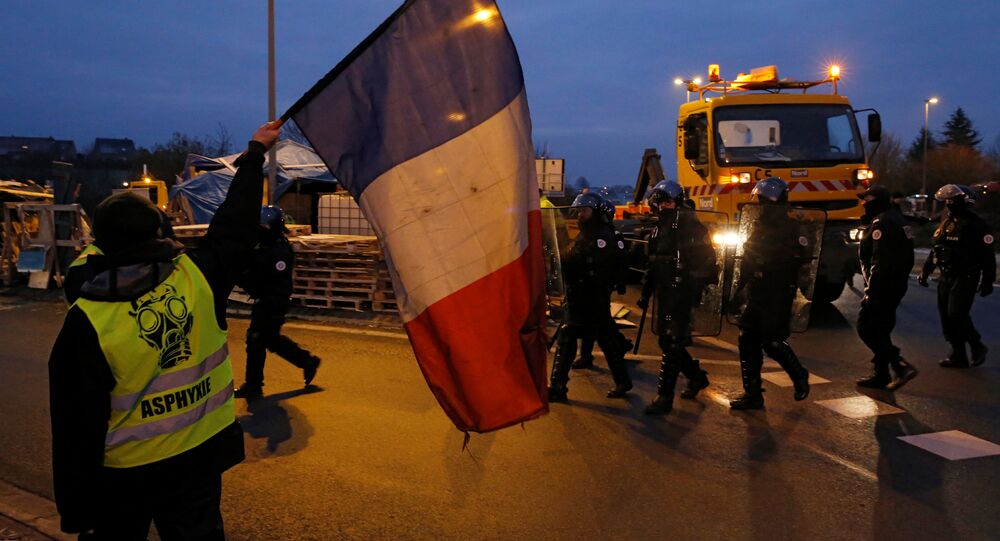 "They want to keep track of people, and this will restrict people’s freedoms. It threatens public freedoms … It also means more work for the police. But we think that this problem requires a political solution and not settling for an answer only in terms of security. What happens now is government sending the police every Saturday to suppress the protesters because they do not want to give them a solution," Michel said, commenting on the new bill.

Moreover, Paris is trying to overshadow the yellow vest movement by labeling all protesters violent, the union’s chief noted.

"The French government wants to make people believe that the yellow vests are all violent, and in fact there are not many of them among the yellow vests. They are not violent, they are just manifesting. They do this to avoid answering political questions, they do not want to give a political answer so they come up with a security response with his law," Michel noted.

France’s authorities are also trying to diminish the scale of the movement, according to the secretary general of the police union, who stressed that the French government was "lying about the figures" as they said that there were only some 50,000 protesters, while his union estimated that there were "at least 300,000 people on streets."

© AFP 2019 / Ludovic Marin
Macron’s Approval Rating Up 5% First Time Since Yellow Vests Rallies - Poll
In light of the violent protests that have been rocking France since mid-November, Philippe announced on Monday that a new bill tackling violent protesters would be put to a vote in the French parliament next month. According to media reports, the bill will ban people designated as violent from attending protests and introduce fines as high as 15,000 euros ($17,000) and year-long prison sentences for anyone who covers their face during violent demonstrations, among other measures.

The wave of the so-called yellow vest protests — named after the obligatory attribute of French cars — started in mid-November. While the French government has scrapped its planned hike in diesel taxes, which is what initially sparked the protests, the yellow vests have evolved into a broader movement against government policies and rising living costs. The rallies have been marked by violent clashes between protesters and the police.

Over 1,000 People Sentenced in France Over Yellow Vest Protests