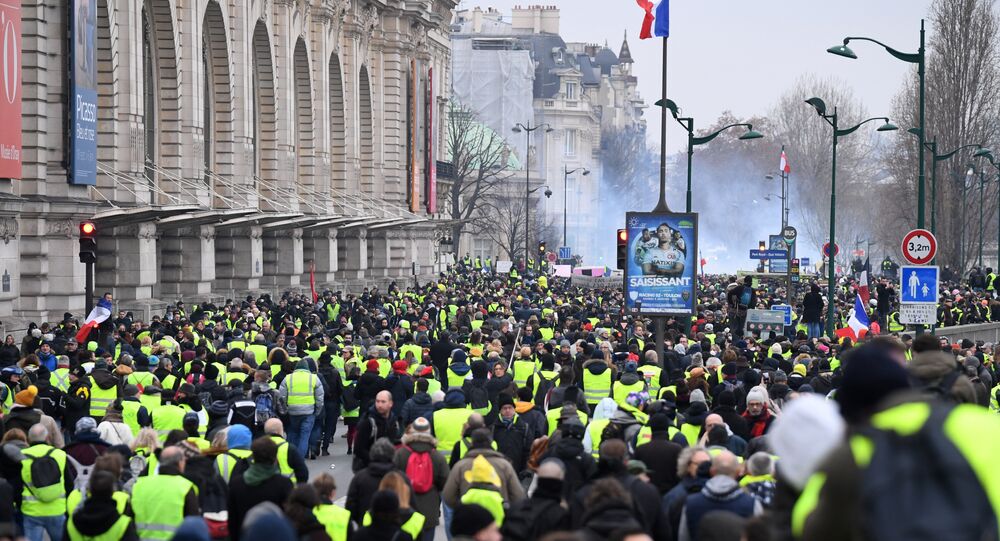 Tens of thousands will join the "Britain is Broken" demonstrations on 12 January to demand an end to UK prime minister Theresa May's administration, with fresh calls for an immediate general election and solidarity with the French Yellow Vest Movement across the English Channel in France.

Why are Demonstrators Protesting This Saturday?

Demonstrations are using the "Britain is Broken" slogan as parliamentary politics under Brexit have become "aggressively divided and threatening" whilst indicating "a society under extreme stress", Mr. Greenshields said.

© AFP 2021 / Remy Gabalda
'Yellow Vests' are Outcome of EU's Decade-Long Austerity Measures – Activist
Social divisions did not originate with Brexit but the "predictably dismissive attitude" of UK leaders towards Brits who voted to leave the EU, which has "only added fuel to the fire of class division" via increasing wealth inequality and public service cuts, he said.

That fire had been "ignited a decade ago by the sparks flying from the 2008 financial crisis and economic collapse," he said.

"It was partly the handling of that crisis by the British government and the institutions of world capital that led to the BREXIT vote" who "find the will of the people unacceptable, just as they have throughout the 10 years of the economic crisis and its consequences," he said.

"Public services have been cut, slashed and cut again," Mr. Greenshields said. "And the reduction in service levels is intended to undermine our confidence in those services and pave the way for further privatisation to meet the fat-cat privateers' demand for new sources of profit."

Mr. Greenshields explained how increasing numbers of patients at hospitals were "stored on trolleys in corridors" due to NHS cuts, with NHS managers joining staff trade unions and community groups over daily threats to services, adding that "they can no longer cope".

School headteachers and education unions highlighted the "massive underfunding of schools", while further and higher education provisions were distorted by "the competitive search for extra private funds". Police, ambulance, and fire emergency services were also "reduced to levels that are emergencies in themselves", he added.

"In the shadow of Parliament just a week ago, Gyula Remes a kitchen assistant and homeless man died of exposure trying to avoid the cold by sleeping in a tunnel," Mr. Greenshields explained.

Hundreds of thousands of young people were also unable to leave family homes due to housing shortages and escalating rents, with "sofa-surfing" becoming "one of Broken Britain's fastest-growing activities", he said.

Mr. Greenshields also highlighted the contradiction between growing tax cuts for billionaires alongside more charitable foodbanks "for the desperate" who were "struggling to meet the needs of over a million families".

Mr. Greenshields also slammed the Prime Minister's Universal Credit system, stating that its purpose was to "promote and underpin the 'gig economy' — part-time, casual, zero-hours precarious working designed to eradicate employers' responsibilities and undermine all rights at work", including pensions.

"Only 1 in 40 ‘new jobs' are proper full-time employment," he said. "Of course, trade unions remain under fierce attack as they demand improved wages, pensions, contracts and conditions."

In 2019, Britain's top bosses earned on average what the average worker earned in a year by 4th January, according to the Morning Star.

"There is much, much more that will bring us out to the People's Assembly demonstration on Saturday to get the Tories out and call a general election," he said.

How Will a General Election Resolve Crises in the UK?

"Of course, the economic and political crisis will not be resolved by a general election, or by a simple change of party in office," Mr. Greenshield's said, adding that "the crisis is based on systemic problems of the type of society we live in."

"But that is precisely why there is such enthusiasm and excitement now in 2019 for a general election because one parliamentary party promises to not just preside over that system, but to change it ‘for the many, not the few'," he said.

"Labour's policies, based on investment, increased public ownership and a commitment to bring about an irreversible shift in wealth and power in favour of ‘ordinary people', Britain's working class."He said that demonstrators on Saturday "are determined to sustain the mass movement" and will do so "as long as it takes to prevent it [from] being destabilised by the ruling class" whilst avoiding the failings of the "anti-austerity" Syriza government in Greece.

"Acting through the European Union Commission and Central Bank, powerful forces undermined and destabilised that government and imposed yet more austerity on the Greek people," he said.

Due to past experiences with the political and economic power of multinational corporations, Saturday's demonstrations will be "an international struggle where workers must join together" to combat international institutions that "enforce austerity and neoliberal economics and politics", which serve "the needs of those big monopolies and money markets," he stated.

Solidarity with the Yellow Vest Movement

Protestors can listen to speeches from two French Yellow Vest activists and "act in solidarity with workers from all lands" to "put a halt to the racist divisions that are used to weaken us," he told Sputnik.

"We have been marching and demonstrating, taking industrial action and community direct action for years," Mr Greenshields said. "We have always known that we need a political solution, but due to the opposition to austerity over the last ten years, we now have a Labour leadership offering a step on the way to that political solution. That's why this demonstration is different to those that went before — It has in it the seeds and promise of change."

"Of course, the struggle will be intense, and will become more so the nearer to success we get," he said. "But tens of thousands on Saturday will make it clear that we are up for it, and that we will grow into hundreds of thousands, and millions who are determined to see a Britain "for the many not the few".

'Bit of a PR Stunt': UK Austerity End is 'Really No More Than Lip Service'