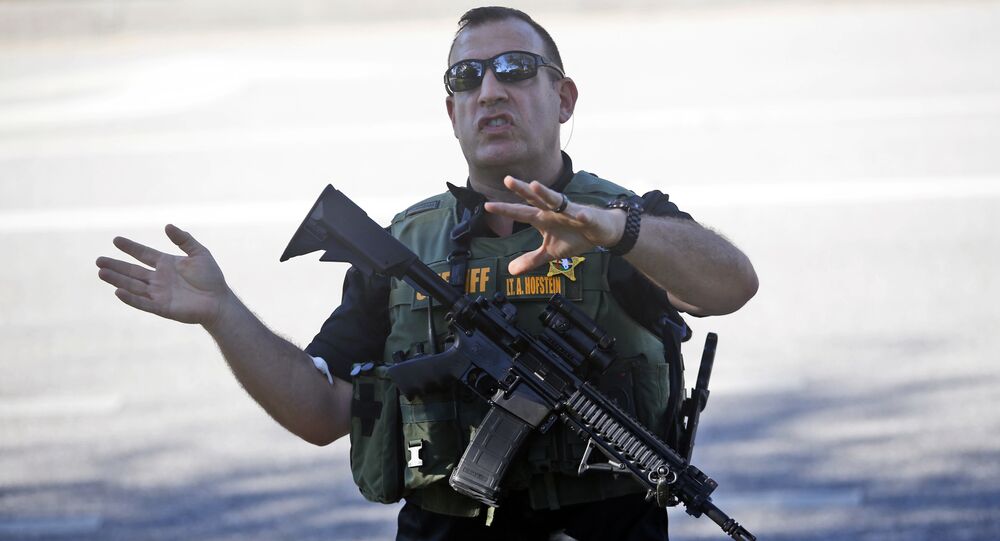 A US government panel tasked to study the Parkland high school shooting has recently come up with a surprising proposal for the US school system. Instead of hiring armed guards or introducing other protective measures, the panel's report suggested training and arming teachers who could protect students in case of an attack.

Steven Howard, a former federal agent with the US Border Patrol and weapons expert, admitted that the solution proposed by the Parkland shooting panel to arm school teachers is "not a perfect cure", but still "makes the most sense". Howard said that if there are three or more armed teachers at a school, they could at least stall the attacker until police arrive.

The former agent argued that as long as schools remain gun-free zones, they will be easy targets for attackers.

"They're at higher risk. They are basically putting out a great big sign that says 'please come kill us'. […] These mass casualties happen in places that specifically forbid firearms, because [perpetrators] know that in schools, theatres, guns are not allowed", Howard said.

Dr James Jacobs, director of the Centre for Research in Crime and Justice at the New York University School of Law, doesn't think that teachers with guns can prevent school shootings, noting that even the presence of trained armed guards at Parkland high school didn't stop Nicolas Cruz.

Jaclyn Schildkraut, associate professor of Criminal Justice at the State University of New York at Oswego and an expert on mass shootings, supported Jacobs' point. According to her, the introduction of such a measure would only increase the number of fatalities at schools. She argued that no school shooting has been brought to an end by a "good Samaritan" with a gun so far.

While James Jacobs suggested that more guns in schools could lead to "risks of accidents and mistake", Schildkraut went even further by saying that an attempt to stop the attacker by an unexperienced shooter could lead to a teacher accidently shooting innocent bystanders.

"A look at the accuracy rates of officers, who do receive considerable training on firing their weapons[…], provides concerning evidence — in situations where no one is firing back at them, police have a hit rate of just 30%.  When a subject is returning fire at them, it drops to 18%", she said.

Schildkraut added that the accuracy of school teachers in a high-stress situation could be even lower, leading to a possibility where they could hit "unintended targets".

Steven Howard had another take on the problem. He is confident that accidents involving guns mostly happen involving untrained people, while the panel suggested that only trained and thoroughly selected teachers should be armed with guns. Howard added that these teachers should be volunteers, who would receive not only training, but also increased pay for the additional risk.

Another issue on the table when it comes to arming teachers is its costs efficiency. Dr James Jacobs noted that introducing any security measures would involve additional spending, which is nearly impossible considering the funding shortages at schools.

Jaclyn Schildkraut argued that arming teachers instead of hiring security personnel is not necessarily economically profitable.

"There are a lot of costs associated with a policy that have to be taken into account, such as the cost of the weapons (if districts are providing them) and ammunition, storage costs, increased insurance policies for accidental discharges and deaths, etc.", she said.

Howard is more sceptical on the matter of hiring a security detail at all schools, positing that doing so wouldn't be cheap and would thus never serve as a solution to the problem.

"The alternative is to basically make schools like airports — everybody has to be searched, X-rayed, metal detectors etc. through the entrances every single day. Arming teachers makes more sense and is far more economical", he said.

Are There Alternatives to the Parkland Panel's Proposal?

Schildkraut sees more economically affordable alternatives to arming teachers and points out that such changes have been discussed for a long time. She believes that schools need two things. The first is annual training in "active shooter protocols", which would prepare both teachers and students how to react properly during an assault.

The other is door locks, which could be used only from inside classrooms. Schildkraut points out that most school shootings do not last for more than 5 minutes and a conventional door lock could buy considerable time for those locked inside a classroom, and for others, saving more lives until police arrive.

Schildkraut doesn't think that the measure proposed by the Parkland panel will have "any traction" in terms of political implementation and suggested that it would only be supported by gun rights advocates in the US establishment.

"Gun rights advocates want these individuals in place under the belief that ‘the only thing that stops a bad guy with a gun is a good guy with a gun'. Gun control proponents are concerned that the introduction of more guns can lead to more problems", she said.