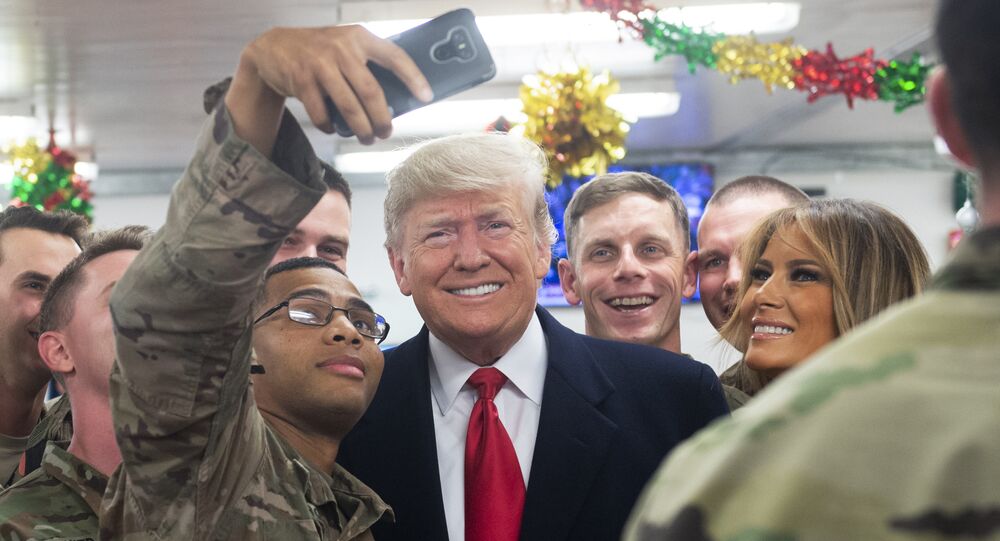 'Cracks Appear': Economist on Why US' Giving Up Its Global 'Policeman' Role

Donald Trump's official rejection of the role of a global "policeman" could be called the most important event of the outgoing year, Sputnik contributor Ivan Danilov writes, stressing that the cracks in the foundations of American hegemony have already become too visible.

Donald Trump's abrupt withdrawal from Syria and a partial pull-out from Afghanistan have indicated that the US is no longer capable of pouring trillions of dollars into expensive overseas operations, says Russian economist and Sputnik contributor Ivan Danilov.

During his surprise visit to Al Asad Air Base in Iraq on 26 December the US president declared an end to America's role as a global "policeman", stressing that it is "ridiculous" to maintain presence "in countries most people haven't even heard about".

.@FLOTUS Melania and I were honored to visit our incredible troops at Al Asad Air Base in Iraq. GOD BLESS THE U.S.A.! pic.twitter.com/rDlhITDvm1

​"America shouldn't be doing the fighting for every nation on Earth not being reimbursed, in many cases, at all", President Trump told American troops. "If they want us to do the fighting, they also have to pay a price — and sometimes that's also a monetary price — so we're not the suckers of the world.  We're no longer the suckers, folks".

© AFP 2021 / SAUL LOEB
Iran Slams Trump's Visit to Iraq as Disrespect for Sovereignty - Reports
It is not the first time that Trump has raised the "price" issue. Earlier this year while dropping a hint that the US was going to pull out of Syria "very-very soon" the US president remarked: "Saudi Arabia is very interested in our decision, and I said, 'Well, you know, you want us to stay, maybe you're going to have to pay'".

In April 2018, The Wall Street Journal broke that the US had reportedly requested Saudi Arabia, Qatar and the United Arab Emirates to allocate billions of dollars to restore the northeastern part of Syria and maintain their military presence in the region to fill the "gap" after the US' withdrawal.

Now, according to Trump, it's Turkey and Saudi Arabia who will bear the burden.

"In fact, Saudi Arabia yesterday — you probably read — stepped up to the plate and has already made a commitment of substantial funds for [Syria's] development.  And President Erdogan of Turkey has also agreed to take out any remnants of ISIS* [Daesh*], and we'll be working with them", the US president told the gathering at the Al Asad Air Base.

Saudi Arabia has now agreed to spend the necessary money needed to help rebuild Syria, instead of the United States. See? Isn’t it nice when immensely wealthy countries help rebuild their neighbors rather than a Great Country, the U.S., that is 5000 miles away. Thanks to Saudi A!

© Sputnik / Vladimir Rodionov
Trump's INF Pull-Out: Why Germany's Arms Race Fears May Come True
The US president further highlighted that the Americans "are spending hundreds of billions of dollars" while fighting for other nations. Trump has repeatedly stated that the US has spent $7 trillion in the Middle East since 2001.

Commenting on Trump's remarks, Danilov presumed that the US president had realised "that the modern United States does not have enough resources to wage wars all over the world".

According to the Russian economist, Washington is unable to force its allies and partners to pay for its multi-billion dollar military overseas operations.

To illustrate his point, Danilov cited the fact that only Poland has agreed so far to pay $2 billion for Washington's "protection". He referred to Warsaw's request for a permanent US military base in the country — the much-discussed "Fort Trump". However, according to the Sputnik contributor, these $2 billion are just a drop in the bucket for the US war machine.

"Summarising the statements made by the American leader, one can draw several interesting conclusions", Danilov wrote. "There is no money left. More precisely, there is still money, but it is no longer possible to spend it on a massive, because it is running out, and the US financial markets (which usually predict well the state of the country's economy as a whole) do not feel very good".

© AFP 2021 / Noorullah Shirzada
US' Afghan Pull-Out to Create New Challenges for China, Pakistan – Analysts
According to Bloomberg, although the US economy is not heading for a recession, it has become particularly vulnerable to potential political mistakes and market accidents: "These self-inflicted wounds, while yet to constitute a critical mass, have become more of a threat to economic and corporate fundamentals, rendering both more susceptible to the slowing global economy", the media outlet warned.

Earlier this year, the US Office of Government Accountability (GAO) and the Congressional Budget Office (CBO) raised the alarm over the mounting national debt and rapidly growing federal deficit which is projected to reach $1 trillion by 2020.

"The cracks in economic, institutional, and military foundations of American hegemony are now visible", Danilov pointed out, suggesting that Washington's "official rejection of the role of a global policeman is, perhaps, the most important event of the outgoing year".