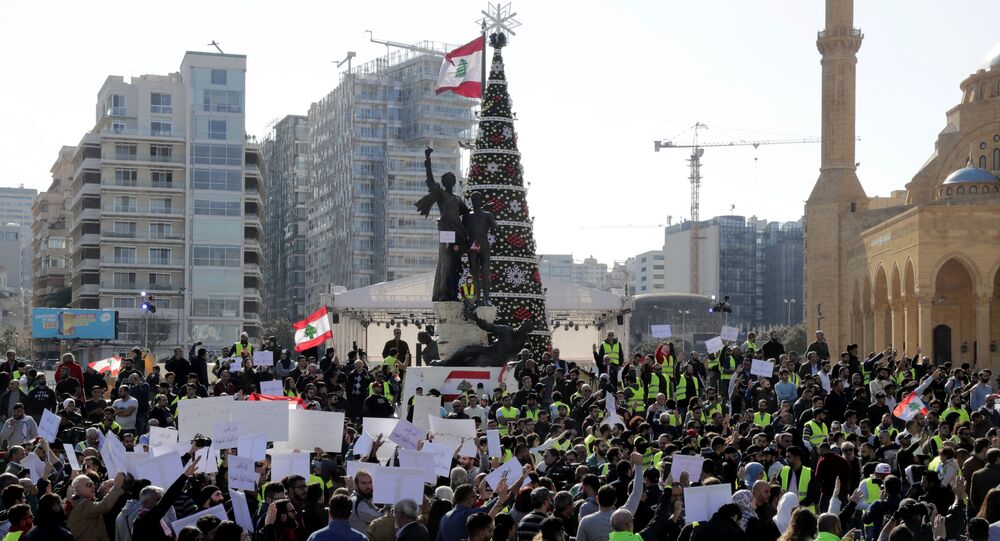 The Lebanese capital witnessed popular protests on Sunday, with hundreds taking to the streets, shouting “Revolution, revolution!” and “Down [with] the Government!”, condemning the country’s political and economic situation. Some were wearing yellow vests – the garment which has emerged as a symbol of resistance following civil unrest in France.

"We demand respect for our rights. Where is the medicine? People are dying at the doors of hospitals. The government has been inactive for years; what do we need such a government for? Let them resign!" an enraged protester told Sputnik.

"Seven months ago we elected a parliament that hasn't yet been able to form a coalition government. This means the parliament simply doesn't perform its functions, it has failed," the demonstrator stressed.

An activist from the Sabaa Party added that protesters demand the formation of a new government as soon as possible, since without it, the country will sink into the abyss. She also said that her party will push parliament to punish corrupt officials and recover embezzled public funds.

Rally-goers waved makeshift banners, with various messages, including, "down [with] the government", "confiscate the stolen money", "fight against corruption", and "form a government".

The protests weren't organised or planned in advance, according to demonstrators.

As reported by Al-Watania, police and army patrols had to use force to contain the unrest on the Hamra shopping street after protestors damaged private property, leaving shop windows broken.

"Many people suffer from hunger; there is dissatisfaction in society. We are sharing the calls to go out to protest through social media. My friends and I participated in a rally last week, today we have also come and will come any other day to make the people's voice heard," a young man told Sputnik.

© AP Photo / Adel Hana
Lebanon Urges Global Community to Stop Airstrikes on Gaza Amid Escalation of Tensions
Another man accused the government on reneging on its promise to reform the country. He explained that there should only be one government, but in fact, there are 18 separate ministries in the country that are united by a common goal — to prioritise their own interests and work against the people.

The protests occurred in the context of the ongoing political crisis surrounding the formation of a new coalition government. On May 24, President Michel Aoun ordered Sunni politician Saad Hariri to again head the cabinet, following the nation's first general elections in nine years.

However, the various parties are still yet to form a government due to disagreements over what foreign policy stance Lebanon should adopt.