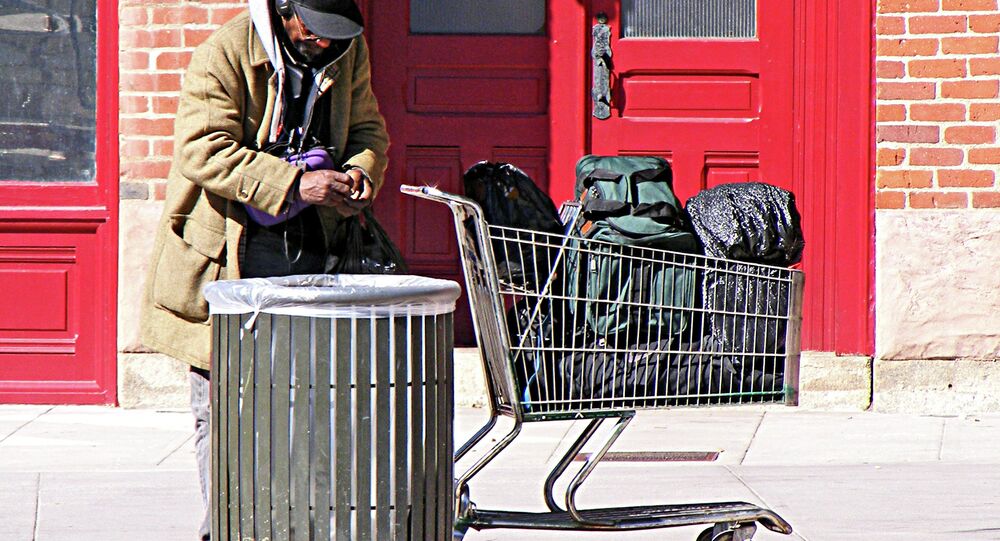 Spike in Homelessness in US Directly Attributable to Capitalism - Professor

The number of people without homes in the United States has increased for the second time since 2010 following 2017’s spike, according to a new report from the US Department of Housing and Urban Development (HUD).

Nearly 553,000 people are homeless in America, with California and New York having the highest homeless populations, according to the report.

Homelessness has surged 75 percent in Los Angeles, California, over the past six years. Prior to 2017, homelessness in the US had been in decline for seven years.

In New York City, authorities report that 114,659 children in New York City public schools are either homeless or living in temporary housing — that's one out of every 10.

The "basic explanation" for rising homeless in the United States, the wealthiest country on earth, is the "profit system, or if you like, capitalism — just [to] reduce it to a simple word," author and economist Richard Wolff told Radio Sputnik's Loud & Clear.

​"The way capitalism works is that you produce a good or a service if A, you are a capitalist, and B, there's profit for you in doing so. And the corollary of that is if there isn't profit for you in doing something, you don't do it. It's not about social need — such as, for example, people's need to have a home to live in; children's need to have a stable home if they're ever going to learn in school all that they'll need for the rest of their lives, hence the importance of the statistic you gave for New York City school children. It's not social needs that govern whether things get produced or not," Wolff told Loud & Clear hosts Brian Becker and John Kiriakou.

"It's profit, because we leave the decision to produce in the hands of private capitalists in our housing system. By the way, not all countries do that, and not in the United States was that always the case," Wolff added, citing the nation's rare public housing projects.

In an interview with NPR in 2017, US Housing and Urban Development Secretary Ben Carson said that rents in New York City and Los Angeles are rising "much faster" than residents' incomes, arguing that the government should work with community groups and religious institutions to somehow fight the problem.

"We just need to move a little bit away from the concept that only the government can solve this problem by throwing more money at it," Carson told the outlet.

Wolff argued the opposite, telling Loud & Clear that "if you leave housing in private hands, which is what we've done in the United States overwhelmingly, and particularly in the last several decades, well then you get the housing that's profitable."

"It shouldn't surprise anyone that if poor people are unable to pay high prices for homes or high rents for apartments, and then there isn't enough profit for a private capitalist to produce those things, well, then, they don't," Wolff said.

The perversity of those incentives has led to a "bizarre situation in a modern capitalist economy like the United States, that on the one hand we have hundreds of thousands — and I would guess it's more in the millions — of people without adequate housing, and at the same time we have huge amounts of housing that has nobody in it for all kinds of reasons, mostly reducing to the fact that it isn't profitable to provide housing for the poor who need it, and it is profitable to [have] housing even if it sits empty for a while because eventually the capitalist hopes and believes that somebody will come in and make it a profitable investment over time," Wolff argued.

Wolff isn't the only one who believes that the number of homeless people in the US is in the millions. In 2011, Amnesty International's then-director of its Demand Dignity project, Tanuka Loha, wrote that "approximately 3.5 million people in the US are homeless, many of them veterans. It is worth noting that, at the same time, there are 18.5 million vacant homes in the country."

That's well over the number of homes required to eradicate homelessness, which in the US is often criminalized, subjects people to "cruel, inhuman and degrading treatment" and is in violation of international human rights treaties, the United Nations Human Rights Committee declared in 2014.

"We know that there are vast tracts of housing that has been allowed to become dilapidated — often it sits empty. I recently went on a trip of Detroit, and I was shown block after block of abandoned houses," Wolff said. "Many of them remain standing, eminently renewable, and so if there were a concerted government effort, it would be less costly to renovate what's already available… without a big new building program, even though" such a project would also have benefits, Wolff argued.