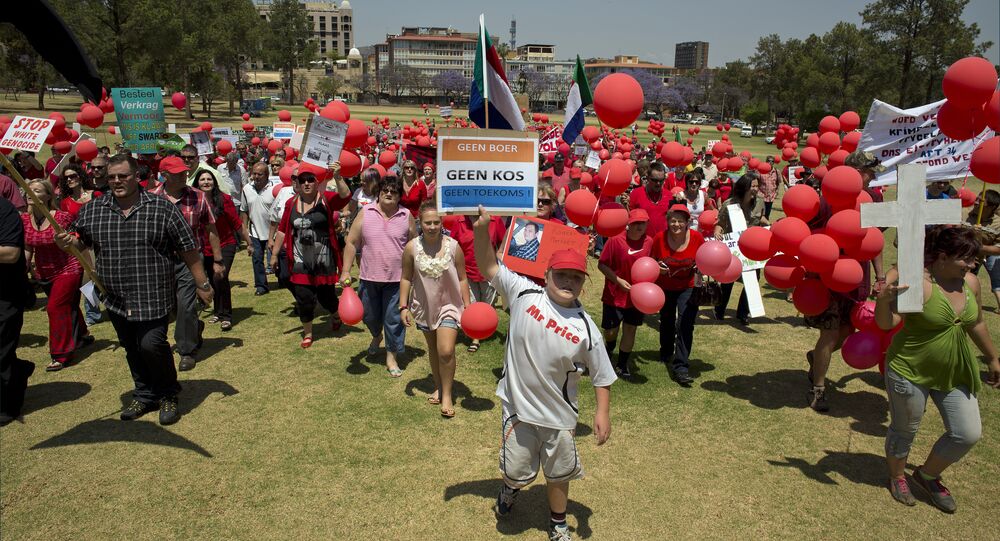 British MP Andrew Bridger has called on Prime Minister Theresa May to condemn South African authorities, who have approved land expropriation from white farmers. Addressing Theresa May Wednesday, Bridger slammed the decision, saying: “This is not only wrong, it is also risking putting another African country from a bread basket into a basket case”.

Several weeks ago, South Africa's National Assembly endorsed a proposed amendment to the Constitution that will allow for mainly white-owned farmland to be taken without compensation. Sputnik has discussed this with Jack Miller — Cape party leader, a political party in the Republic of South Africa.

Sputnik: What is your take on the British MP's statement?

Jack Miller: We support Andrew Bridger's statement 100 percent. He's got it dead right. If the South African government goes ahead with the stealing of property we will become just another basket case country in Africa. And to add to that point, Theresa May's response to him was pathetic, it was naive and it was weak.

Sputnik: What's the Cape Party's approach to the land reform and how does it view the recent discussions or decisions passed by Parliament?

Jack Miller: Well, I'd like to give a little bit of history before I answer that question. We need to understand where South Africa is right now and where we've come from. The land expropriation issue is something that has only come to the table more recently, but there was a programme called "Willing buyer, willing seller" in the past where the South African government would pay farmers a fair market price for their property.

© AP Photo / Schalk van Zuydam
White Farmers in South Africa May Lose Their Lands...Next Year
Farmers could then sell and this farm would then be given to the government to allocate. Now at this point, the government has spent over 20 billion rands ($1.4 billion) purchasing over 2.8 million hectares of farmland, which to this point today is sitting unused. There is no land issue in South Africa. The South African government is creating a scenario of conflict and racial hatred to push forward a political agenda.

Now what's happened is a group of national socialists, extreme fascists in South Africa have taken over the government. The same thing happened in Germany in the 1930s, and they've got an exclusive black agenda. Essentially, the South African government has been taken over by black Nazis who are pushing forward a racist agenda against anyone that does not fit into their view of what Africa should be.

We on the other side believe in a peaceful, prosperous nation for all races, and we at the Cape Party would propose a continuation of the "Willing buyer, willing seller" system would be a preferable one to what the government is doing now. And if they will not do that then we believe that power should be devolved down to the local communities in the various provinces of South Africa.

Sputnik: What is the feeling on the streets? How do people comment on the government's decision?

Jack Miller: It depends on who you talk to. If you speak to farmers they're terrified and I also want to take this opportunity to speak to your listeners and to say thank you. Thank you so much to the Russian people and to the Russian government for taking the stance that it has. We're obviously very sad to be losing these farmers, but for the Russian people to open their doors and accept our farmers who are suffering the threat of death on a daily basis, at least we know we're not alone out there.

Sputnik: What would be the Cape Party's propositions on how to resolve the situation?

Here in the Western Cape, we pay over 200 billion rands in taxes every year. The ANC government returns to us a mere 50 billion rand. What we're saying is that the ANC government needs to change its policies to take into account the will and the desire of the people of the Cape to reduce the taxes that we're paying, to give us more political freedom.

And if they will not do that then we will push for a referendum and if we get a majority in that referendum we will declare the Western Cape an independent country.

Sputnik: In your opinion, what consequences could this controversial decision bring? Can it, for example, boost the secessionist movement?

© AP Photo / Schalk van Zuydam
‘Playing With Dynamite’: Trump Stokes Racial Tensions in South Africa Over Land Reform
So the fact that the government is pushing for these centralised policies, which would discriminate against the ethnic minorities in the country, but at the end of the day would affect every single racial group, black, white, coloured, Indian, or Asian — we would all suffer from this.

So it doesn't matter where you live in South Africa and what race you are we're all suffering and as a result of that, I think we're going to see secession movements becoming stronger and stronger as the ANC's policies get worse and worse.

Sputnik: Do you feel support from the public? And what are the main reasons for your calls for independence?

Jack Miller: We do feel support. In fact, in the last three by-elections here in the Cape we at the Cape Party have come second to the ruling party, the DA. We've beaten all other political parties in the last three by-elections. So this is a very positive change for us because after being founded in 2007 we found that secession wasn't really a primary topic of interest back then.

But we're finding that we're gaining tremendous popularity very rapidly, and I think in the short-term we could see some significant gains and in the long-term, we believe that Cape independence is in fact inevitable.

Views and opinions, expressed in the article are those of Jack Miller and do not necessarily reflect those of Sputnik