The recent conviction of Nicholas Slatten, a former Blackwater Worldwide employee, is just one of many incidents in which the private security company was implicated in US war crimes, Kevin Zeese, co-coordinator of Popular Resistance, told Sputnik.

Slatten was found guilty on Wednesday of first-degree murder in the slaying of Ahmed Haithem Ahmed Al Rubia'y. The murder took place in September 2007, when Slatten, working alongside three other men in a Blackwater security team, discharged his firearm at dozens of unarmed Iraqi civilians.

At the time, the Blackwater employees were escorting a US embassy envoy through Nisour Square in Baghdad, Iraq. Firearms were discharged after it was reportedly suspected that a vehicle carrying explosives was approaching the envoy.

​"It's an amazingly important case," Zeese told Radio Sputnik's Loud & Clear on Thursday. "It's impressive that the prosecutors stayed with it after it was overturned and continued to prosecute."

Slatten first saw charges in 2008 before the case was initially thrown out. He landed back in court in 2013, was convicted in 2014 and sentenced to life in prison in 2015. However, that ruling didn't stick, as the US Court of Appeals decided in 2017 that Slatten deserved a new trial, according to NBC News. 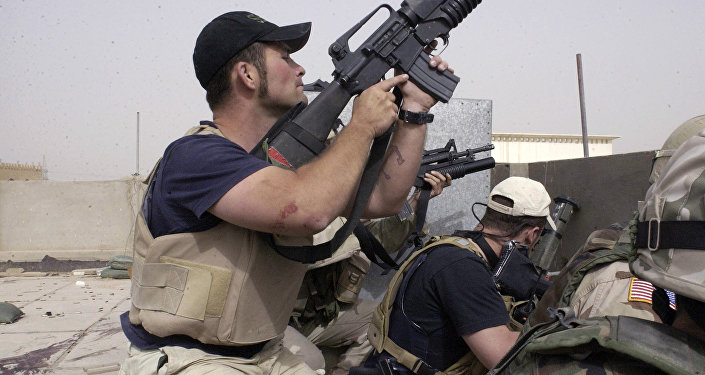 "This got a lot of attention because this was such a blatant, massive attack into an area where lots of people were walking and driving. These kinds of attacks happened regularly," Zeese told hosts Brian Becker and John Kiriakou.

"This is part of a series of US war crimes in Iraq, Afghanistan and other countries."

In September, John Bolton, the national security advisor to US President Donald Trump, threatened sanctions against the International Criminal Court (ICC) following reports that it was considering prosecuting US servicemembers over alleged war crimes in Afghanistan.

"The United States will use any means necessary to protect our citizens and those of our allies from unjust prosecution by this illegitimate court," Bolton told officials at a meeting of the Federalist Society. "We will not cooperate with the ICC, we will provide no assistance to the ICC, and we certainly will not join the ICC."

"We will consider taking steps in the UN Security Council to constrain the Court's sweeping powers, including ensuring that the ICC does not exercise jurisdiction over Americans and the nationals of our allies that have not ratified the Rome Statute," Bolton added.

The court responded to Bolton's threats by indicating in a short statement that it is an "independent and impartial judicial institution… [which serves] as an instrument to ensure accountability for crimes that shock the conscience of humanity."

Zeese believes that in time, the US will be held accountable for its crimes abroad.

"The ugliness of US military actions, US war crimes, is becoming more widely known in the United States and around the world. At some point US officials will be held accountable," he concluded.