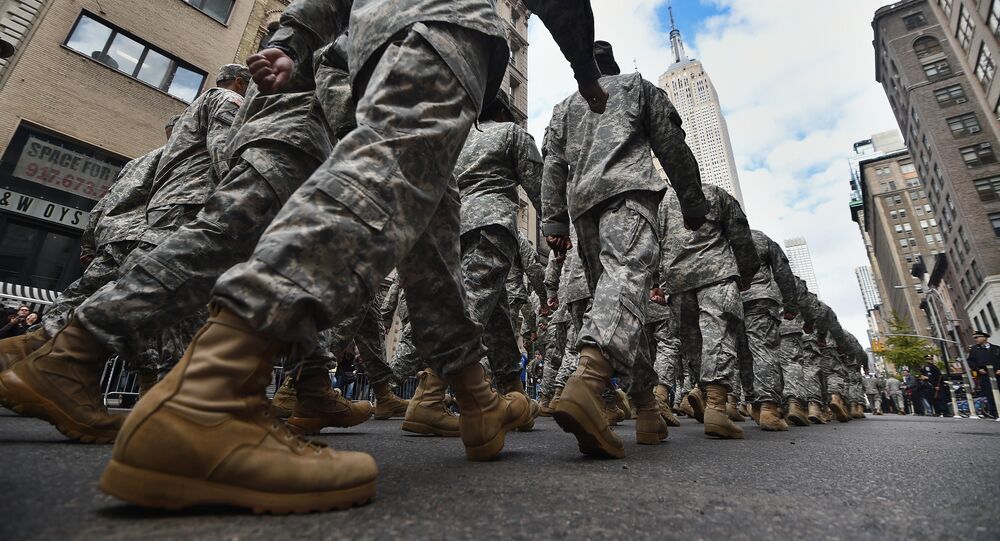 Last month's shooting in Thousand Oaks and the speculation that shooter Ian David Long could have suffered from post-traumatic stress disorder (PTSD) due to his military background, has once again brought to the spotlight the concern that the US government has been reluctant to deal with its veterans’ health issues, let alone act on gun control.

334 mass shootings in 355 days of the year 2018 – these are the grim statistics that unfortunately seem to have changed nothing in the United States in the Trump era.

“Unfortunately, there has been a pattern in mass shootings with a lot of uproar and outrage and then nothing happens. I am hoping… that with the general disgust and fear about ‘how could this keep happening again in our country’, which is a wonderful country other than the mass shootings every week… that we can move forward on this and really make the US a safer place for everybody, a healthier place for everybody”, says Dr Elspeth Ritchie, a former chief psychiatrist in the US army.

The incident has brought into the limelight the fact that anyone, even a PTSD-stricken veteran, is entitled to gun ownership due to the second amendment of the US Constitution. But what is more important is that the state has somehow failed to help its veterans to re-adjust to normal life and deal with their mental condition – and the statistics are quite appalling.

PTSD as it is: Nightmares, Intrusive Thoughts, 'Triggers'

Somewhat gruesome data from the Department of Veterans Affairs indicates that between 11 and 20 percent of veterans are diagnosed with post-traumatic stress disorder in the aftermath of US military operations in Iraq and Afghanistan respectively in any given year.

© AP Photo / KABC
Gunman Opens Fire at California Bargoers in Deadly Shooting Spree (GRAPHIC VIDEO)
30 percent of Vietnam veterans have had PTSD in their lifetime, while an estimated 12 percent of Gulf War servicemen experienced post-traumatic stress in a given year.

More than 6,000 veterans have committed suicide annually between 2008 and 2016, and according to the department’s National Suicide Data Report, firearms are associated with the highest rate of suicide mortality when it comes to methods used in attempting to kill oneself.

On top of that, the report highlights the fact that the suicide rate among ex-servicemen who have recently applied to the Veterans Health Administration (VHA), which is said to be the largest integrated health care service in the United States, is higher than among those who haven’t.

Many veterans may experience haunting flashbacks related to wartime events long after their service in combat, with symptoms occurring in different forms.

Dr Aletha Oglesby, a blogger and wife of a veteran, has explained that “one of the most common effects of PTSD is the so-called intrusive thoughts. This means they think about the event and remember it almost as if it is happening all over again, experiencing the same emotions of fear and anxiety. It can also include having dreams and nightmares about it. These thoughts can happen spontaneously or can be brought on by ‘triggers’ – sounds, sights, people, circumstances that remind them of the traumatic event”.

Lack of State Supervision of Veterans

In wake of the Thousand Oaks shooting, President Donald Trump drew a connection between ex-military people, mental health issues and violence, although psychiatrists say that this is not always the case.

READ MORE: ‘Inexcusable’: US School Gun Killings in 2018 at Highest Level in History

Certainly, PTSD creates a risk factor, but some believe that the narrative that servicemen are prone to violence after they are discharged is inaccurate. The problem is much deeper and is rooted in a lack of post-discharge supervision of veterans, which is a critical period when the symptoms of PTSD can surface, and treatment may be most effective.

© AP Photo / Robert F. Bukaty, File
Sandy Hook Elementary School Evacuated on 6th Anniversary of Mass Shooting - Police
Dr Elena Klaw, clinical psychologist and director of Veterans Embracing Transition at San Jose State University in California, has explained that the shift from being a service member, who has to stay hypervigilant 24 hours a day, to a civilian, whose life is not in constant peril, takes an “enormous toll on all veterans”.

When it comes to veterans’ rehabilitation and reintegration into peacetime society, the state fails to provide adequate care for those who are still at war on the inside.

Due to the fact that many veterans with post-traumatic stress disorder are not identified or choose not to seek help, they don’t get into rehab programmes.

But if they choose to, they inevitably face a number of obstacles to treatment – from long waiting lists for care, to fear of losing access to guns and the social stigma of living with PTSD.

The US Department of Veterans Affairs, for its part, has been mired in a myriad of problems related to poor management at all levels, something which has also been lamented throughout hundreds of reviews of the VA from current and former employees across the web.

“The way the Veterans Administration works in the US is that they don’t supervise veterans. They offer them medical care and benefits, but it is up to the veteran to enrol in either medical care or benefits”, Dr Elspeth Ritchie has elaborated.

The 2014 nationwide scandal on patient wait times, which led to the resignation of VA Secretary Eric Shinseki, shed light on the fact that tens of thousands of newly returning veterans have to wait at least 90 days for medical care, while many others who enrolled in the VA over the past decade never received the immediate appointment they had requested.

In a bid to find a solution to the recurring issue, the government passed the so-called Choice Programme, which was supposed to allow ex-servicemen burdened by distance from a VA facility or by long waits for appointments to seek help in private care.

© AP Photo / Craig Ruttle
Trump: Second Amendment Will Never Be Repealed in US
But four years later, the Government Accountability Office made a conclusion that basically questioned the hastily-created programme’s raison d’être and suggested that in many cases veterans would have been better off making appointments at VA facilities.

Moreover, the Veterans Choice is exceptionally slow at paying hospital bills, as well as reimbursing the services of psychiatrists, which leaves many former servicemen, including those who suffer from a severe form of PTSD, in desperate need of funding. Taking on financial burdens has, in turn, inevitably aggravated their mental condition.

As a result, many psychiatrists and medics have to stop treating Veterans Choice clients because they are simply not getting paid for their services. Veterans, in some cases, are left with no other choice but to cover their health care expenses themselves, as the VA apparently fails to fulfil its obligations.

Kyndra K. Rotunda, a professor of Military and International Law, and executive director of the Military and Veterans Law Institute at Chapman University, has pointed out that the VA has also been “slow to provide retroactive benefits and discharge upgrades to veterans with PTSD, which is also contrary to recently enacted US Law”.

“Our Institute has represented many veterans with PTSD, in instances when the VA has patently failed to follow the law and award benefits. It’s sad that veterans often need lawyers just to get treatment and benefits – but that’s the sad reality today”, she continues.

Since 2001, the VA budget has increased from $49 billion to $198.6 billion for the current fiscal year, but relentless complaints of poor quality care at a number of medical facilities for veterans have shown that  throwing more money at the agency is not a problem-solver.

But the Trump administration remains focused on pushing a record-breaking VA budget for the year 2020, whereas it should be more concerned with the VA disposing of the funds it already gets in a more efficient way, as well as adjusting the agency’s infrastructure to the real needs of veterans.