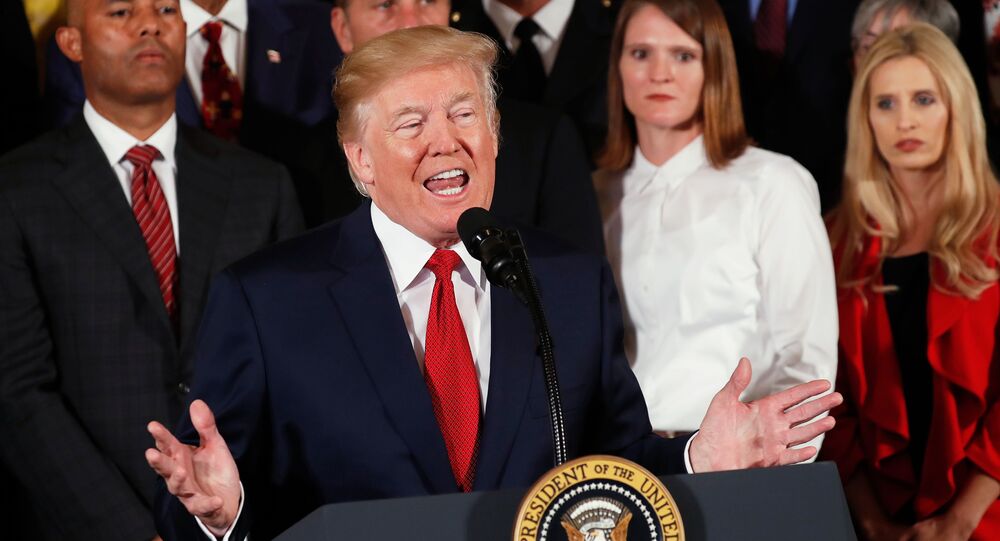 US President Donald Trump named Director of the US Office of Management and Budget Mick Mulvaneyas the acting White House chief of staff in a tweet on Friday. But a video has emerged where Mulvaney is calling Trump a "terrible human being" just before he was elected president.

Sputnik discussed this with Wayne Dupree, a US-based political analyst. He is also ranked as a member of Newsmax's top 50 Influential Black Republicans for 2017. In 2016, he was named a board member of the National Diversity Coalition for Donald Trump.

Sputnik: So according to reports, Mulvaney doesn't want to stay on as chief of staff. What do you think of that?

© REUTERS / Shannon Stapleton
FBI, CIA Officials Reportedly Doubt Major Allegations of Trump-Russia Collusion
Wayne Dupree: When I saw that President Trump had named him as acting chief of staff, as a Trump supporter I was shocked. I could see why, it's a demanding job, you really have to have the taste for it.

President Trump demands a lot, maybe Mulvaney loves the job that he's in right now, it really demands a lot and the way that the opposition media has been going after President Trump lately and the Democrats are ready to take control of the House in 2019, you're looking at a 1-1.5 years of total chaos targeting the White House.

Sputnik: Earlier US media speculated that Treasury Secretary Steven Mnuchin or Trade Representative Robert Lighthizer could fill this post; what do you think about those possibilities? If in fact Mulvaney does not stay on, do you think that one of those two could step in as chief of staff?

I think the only person that I've seen not really say no is probably Mark Meadows, who is a representative in the House; but I think Mnuchin has said that he didn't want the position either.

Sputnik: What do you make of Donald Trump's turnover? He has unprecedented turnover.

Wayne Dupree: A lot of positions also have to be approved on the Senate level and the Democrats just aren't doing it.

Sputnik: Which positions were not approved of?

Sputnik: What kind of person does Donald Trump need in this post? What are the biggest challenges that are going to face the person who assumes this post? And what qualities do you think Donald Trump is looking for when he names a person?

The reason why didn't support John Kelly is because there were a lot of "Make America Great Again" individuals that were fired or that left because of John Kelly, and when you lose the people that you came to the dance with and you are on dance by yourself surrounded by people that you really don't know, or they don't have your interests, then there're going to be problems.

© REUTERS / Lucas Jackson
Trump Mocks at Fed's New Possible Interest Rate Hike, Calls It 'Incredible'
For those Trump supporters that are on the ground, he is looking at various things like the wall: the border wall isn't being funded; however, the Republican establishment have passed close to $4 trillion already in spending. $4 trillion already in spending, but they can't give money for the wall.

They promised that they were going to repeal Obama care, 99-100% of Republicans in the Senate set up a repeal to repeal Obamacare when President Barack Obama was in office, but then when Donald Trump gets in the office we cannot find that so we need to start all over again.

He's surrounded by a lot of people that don't share his vision, but as long as they get what they need, like I said close to $4 trillion in spending, they're fine but they don't want him to have what he wants.

So he needs somebody that is on the same page, that is going to exhibit and push what he's trying to do and I don't think John Kelly was like that.

Sputnik: What you expect from Mulvaney, what do you think is the first thing he's going to do?

Wayne Dupree: I think he's going to tread lightly at first. From what I've seen, he's a great tactician when it comes to speaking when he is standing in front of the press. He's very valuable and he breaks things down and he analyses right in front of you.