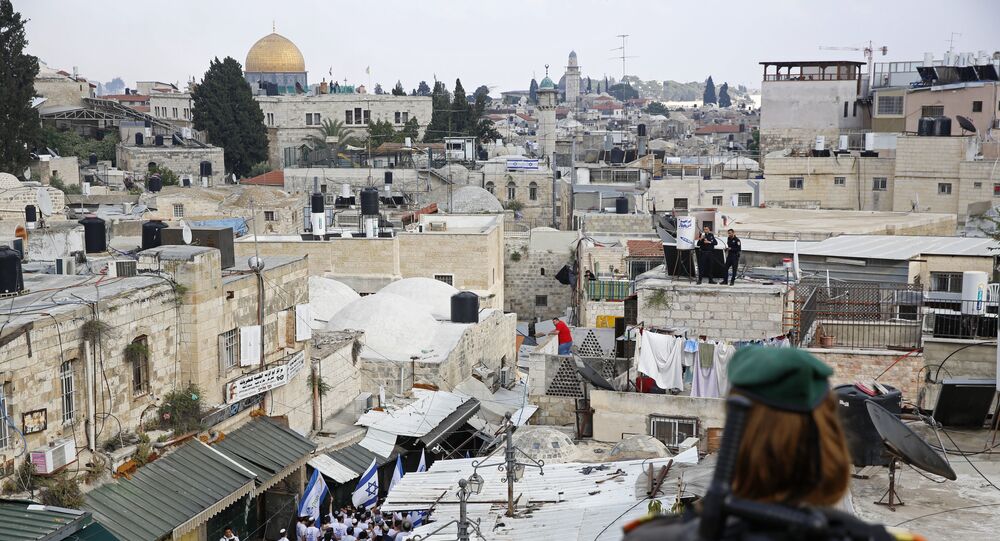 Australia has recognized West Jerusalem as the capital of Israel. This is what Australia's Prime Minister Scott Morrison said. However, he noted that the embassy wouldn't move from Tel Aviv until a peace settlement is reached.

Sputnik: PM Netanyahu commended Australia’s move as a step in the right direction. What is your personal feeling about Canberra’s decision?

Dr Meir Elran: Well, first of all, we have to understand what the decision really is.

So, after a long time in which we were brought to believe that Australia is going to recognize Jerusalem as the capital of Israel, the actual decision, apparently, of the government of Australia was to recognize the Western part of Jerusalem as the capital of Israel, which of course brought some kind of a disappointment from the part of many Israelis.

© CC BY-SA 3.0 / Yourway-to-israel
Capital Question: Israeli Minister Slams Australia for Jerusalem 'Division'
So, we have to understand that, on one hand, it’s definitely a change in the policy of Australia in this particular matter, but it’s not a full step forward, because by recognize the Western part of Jerusalem it means that it does not really agree with Israeli assertion that Jerusalem, as a united city, is the capital of Israel.

So we have to understand what the fine-tunings of this particular decision are in order to appreciate its significance.

Sputnik: Some senior Israeli officials have expected more from Australia, perhaps, that's what you’re alluding to as well. Why do you think Australia failed to recognize Jerusalem in its fullest and entirety as Israel’s capital?

Dr Meir Elran: Well, the reason for that I think, of course, is that Australia, as other countries, see Jerusalem not as a sole issue but as a part, an important part, of the issue of the overall Israeli-Palestinian conflict, and as we all know this conflict is still going on and has not yet been solved one way or another.

So many countries, including Australia, by the way also the United States for that matter, and other countries that are very sympathetic to the state of Israel, withhold their final judgment and final legitimation of different aspects of the conflict between the Israelis and the Palestinians until the conflict is resolved or at least negotiations will start again, hopefully soon, so as to find the right ways to conclude the conflict.

And since Jerusalem is a major issue in this respect, countries like Australia would like to keep their freedom of option as far as supporting or less supporting different items, and this is what is happening with regard to Jerusalem.

© AFP 2021 / THOMAS COEX
Palestinians Blast Australian Decision to Recognise Jerusalem as Israeli Capital
And so actually what Australians have been saying in this respect is: Yes, we definitely recognize Jerusalem or part of Jerusalem, or the Jewish part of Jerusalem as the capital of the state of Israel — which is definitely something that has been sought for by the Israelis for a long time, and it is really a true reflection of reality, of more than 70 years now, but it keeps its freedom from defining exactly what the lines or the future lines would be, once negotiations resume between Israel and the Palestinians.

Sputnik: A few commentators have said that it is a very delicate situation, with a lot of Muslim countries being upset that the potential for trade agreements, development of further trade, the Muslim communities and countries, there're gas contracts at stake, there’re all sorts of trade and political things at stake and, perhaps, some countries are being rather pragmatic. What’s your take on it?

Dr Meir Elran: First of all I think you’re absolutely correct in your basic assumption that we have two different issues here. One is the diplomatic, or I would say even the image kind of the conflict, and the other one is actual reality, and we see two conflicting trends in this respect.

On one hand, Israel is really in the last years, and most recently in the last two or three years, has really gained a major momentum in terms of its not only recognition by other countries, but actual bilateral, very, very strong relations with a growing number of countries that beforehand were quite reluctant to deal with Israel.

We’re not talking only about small countries in different continents like South America and Africa, but also major countries like China, India, Russia, of course. And in this respect Israel has become and is currently really a major factor in international relations; not only commerce-wise, economic-wise, but also politically so, so this is one hand.

© AP Photo / Mahmoud Illean
Four Israeli Officers Wounded in Knife Attack on Police Station in Jerusalem (VIDEO)
On the other hand, there is some kind of inertia in traditionalism in the sense of countries that are not really in a position or don’t really think that it is proper for them to alienate the Arab countries or the more extreme trend within the Muslim world so as to give credits to the Palestinian issues.

So we see this duality very clearly. I think the more important aspect of the huge progress that Israel is making in terms of its position on the international arena and, perhaps, less importantly, even though still not insignificant, what the image is that different countries are trying to portray in international relations.

Views and opinions expressed in this article are those of Brig. General Dr Meir Elran and do not necessarily reflect those of Sputnik.