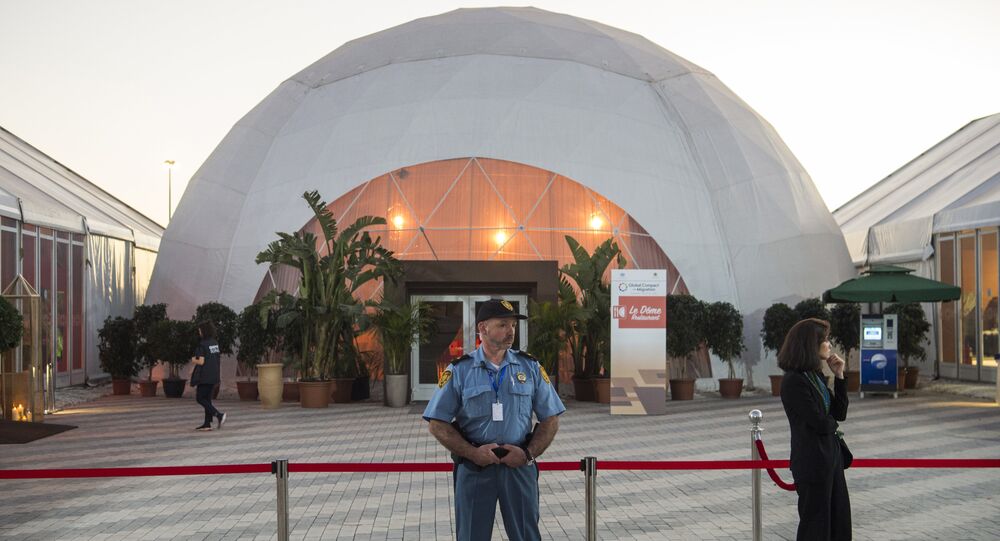 Sputnik: How could the UN migration pact resolve the migration crisis?

Dr Waheed Uddin: The migration of people due to non-political and non-ethnic/religious reasons is entirely an issue for the law makers and judicial process within the jurisdiction of each independent country. The UN migration pact is infringing on the governmental authority of each country according to the country's own constitution and policies.
The pact is not going to solve the overwhelming issue of unwanted migration on mass scale that is caused by poverty and ethnic suppression. These must be addressed by the government of each country itself and UN should provide expert help to provide guidance based best practices.

Dorsey’s Myanmar Scandal, UN Migration Pact, Russian Bombers to Venezuela
Sputnik: More than 150 governments will sign the pact. How could it affect their sovereignty?

Dr Waheed Uddin: A majority of these governments signing the agreement have not even debated it in their national assemblies and parliaments with the law makers and did not have open discussions. Although the UN migration pact is announced as nonbinding but many of its 23 objectives imply that the countries must be abiding by prior intergovernmental agreements such as 2030 sustainable development goals (objective 20) and other objectives (12, 13, 22) directly interfere and coerce the UN bureaucracy to trash a country's own laws of border security and immigration control (objective 11, 12 and 13) and social security benefits (objective 22).
The result is that unelected representative bureaucrats (who are immune to imprisonment for breaking local laws) get their ultimate goals of power and wealth over the governments of the world.

Sputnik: Some experts say that migration is a human right. What is your take on that claim?

Dr Waheed Uddin: The migration policy and law of two countries are involved in mass migration issues. Migration is not a human right in this sense because the policies and laws of individual countries must be respected. By enacting the migration compact the UN bureaucrats are interfering in the laws of individual countries and promoting the socialist agenda of wealth redistribution by forcing one country to accept migrants from another country who may have very different cultural and social values and may not be willing to adapt to the societal norms of the country they want to migrate to.
The eradication of economic and energy poverty within a country should be the ultimate goal of each country's government and UN can play its role, not just lip service.

Sputnik: Might the UN agreement be considered a threat to the sovereignty of countries?

Dr Waheed Uddin: Yes, the UN Migration Compact is a threat to the sovereignty of free member countries because it overrides a country's own law making and judicial processes. It has been processed and enacted in secrecy without open discussions internationally and within each country's parliament or national assemblies, except for a few countries where the ruling parties mostly bulldozed the opposing voices on the issue.

The UN Migration agreement, using the disguise of "intergovernmental agreement" is a deliberate breach of the UN Charter Article 2 Item 7 that directs UN not to intervene in the domestic jurisdiction of any state.

These countries have been threatened by an influx of economic migrants with no concrete steps taken by the countries of origin.

These poor developing countries are being exploited by UN bureaucrats because soon UN will be demanding migration tax on the industrialized countries, like the CO2 tax, and give small part of it to the poor country of UN choice.

The migration issue is solely the responsibility of individual country. Examples are Japan and Saudi Arabia who do not allow mass migration. By signing the agreement, they will betray their own population.

The countries will be coerced by UN to follow its demand that will reflect the core policy of UN bureaucrats, which is wealth distribution (taking by CO2 tax dollars from the industrialized countries) to developing countries of their own choice.

Sputnik: What are the real goals of this 2018 intergovernmental migration pact, the 2015 UNFCCC global warming-climate change accord, and the 2018 international environmental pact?

Dr Waheed Uddin: To gain world power and wealth for the unelected representatives of member states who were handpicked by the ruling government of each country without any accountability and limits on lavish travel and living expenses. The UN intergovernmental agreements will be ultimately used for policing agreements in the countries singled out by UN bureaucrats and fleecing of the world.