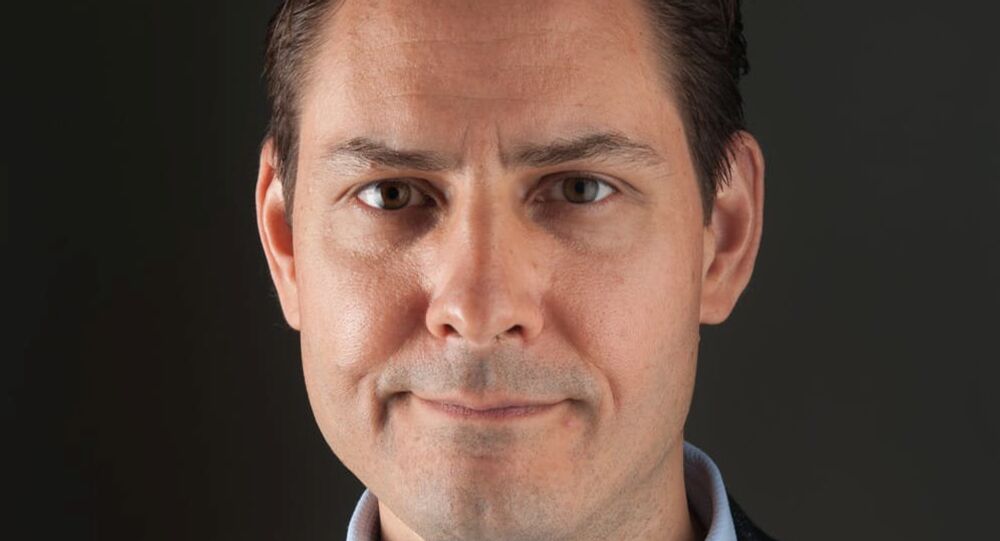 China has recently confirmed that it has detained two Canadian nationals. According to the foreign ministry spokesman, Michael Spavor and Michael Kovrig had been taken into custody. Sputnik has discussed this with Christopher Oldcorn, a Canadian investigative journalist, covering politics, social policy, and international affairs.

Sputnik: Let's start off by looking at the reaction in Canada to the government getting involved in this conflict between the US and China?

Christopher Oldcorn: It's been mainly very negative for Canadians. Canada is a country of laws, we follow international laws and so on, and we do have an agreement with the US that if someone has broken a law in the US and broken a law in Canada we arrest that person and then send them to the other country.

We arrested Meng for supposedly doing business with Iran through some sort of back channel company that even the Canadian government has not actually seen the actual documentation of the reason why Meng was arrested. We just arrested her because the US asked us too. But the EU is doing the exact same thing. So are we going to start arresting the senior manager of the European countries when they come to Canada as well? Because this is all connected to the Iran nuclear agreement and the US backing out of it and everybody else basically staying in.

© AP Photo
Beijing: Detained Canadian May Have Broken Foreign NGO Law
Sputnik: I believe you've mentioned that Trump's popularity is around 10% in Canada, why would that be so?

Christopher Oldcorn: It started out with the steel and aluminium tariffs that were put on the Canadian steel and aluminium for supposedly national security reasons; that somehow our steel and aluminium is a threat to American security. Trump constantly bashes Canada and also our traditional allies such as the European countries, and Australia. And we're in the middle of the renegotiation of NAFTA, which is the North American Free Trade Agreement, and all Trump did during that was bash Canada, bash Trudeau.

And in general, Canadians don't like bullies. We're kind of like the nice people on the planet, who like to pretend we like everyone and want to help everyone and that's kind of like the Canadian mentality. We don't have the sort of mentality of being bullies, and he's attacked our dairy farmers, he said very disrespectful things about Prime Minister Trudeau. One of his senior advisors went on American television saying "there's a hot place in hell" for Justin because he stood up to Trump during the NAFTA negotiation. It's just created a very negative sentiment in Canada towards America, to the point that like 70% of Canadians have actually stopped buying American products.

Sputnik: Canada has often been called by media outlets as the 51st state of America, you'd think that the government would finally take note of the fact even among the population this anti-US sentiment is starting to build up. Why does the government there generally follow the US agenda even if it doesn't benefit Canada itself?

Christopher Oldcorn: Canada has always sided with the US because we have a very, very close relationship. I mean we haven't fought a war in over 200 years against each other and technically the last time Canada and the US actually fought a war we were still a British colony. So our economies are very, very interconnected. We have the longest undefended border in the world. Canadians don't even need a passport to go into the US, even if you go to an actual checkpoint you can just use your driver's license or any other government photo ID. You don't even need to use the passport.

Sputnik: Of course everything that you've mentioned just now and the very fact Canada does kind of come across as the 51st state of America would make it extremely difficult, obviously, for the Canadian government to reach some sort of independence, but do you think that it is the order of the day and it can be done?

© Sputnik / Alexei Druzhinin
‘Scandalous’: US Sets Dangerous Precedent With Arrest of Huawei Executive
Christopher Oldcorn: I think any Canadian politician that wants to try and distance us from America is going to have a very easy time getting elected in Canada and we do have an election coming up next year federally. Most Canadians are just not happy with us doing the US dirty work. America does enough dirty work on its own. It doesn't need our help. And we don't always back America, like the Gulf War. That was just Britain and the US. Canada did not help in that war. So we don't always help the US, but do we do in most cases. But this whole thing with Meng's arrest, it's really just become a bargaining chip in America's trade war with China. Trump is putting Canadians in danger and it's not fair to Canadians to be part of this trade war, because that's not why we arrested Meng in the first place.

We need to continue to diversify our trade so we can be less dependent on America and we slapped tariffs onto some American goods and services when they slapped tariffs onto our aluminium and steel. We need to start slapping more tariffs on America as well because they're trying to do a trade war with Canada too, which makes no sense. I cannot imagine what it's like to be in Washington right now and representing the automotive trade or the pharmaceutical trade, because Trump literally wakes up in the morning, tweets something and the stock markets just go to hell for the day. And finally, I think we should just look at leaving Canadian troops in UN military missions and pull Canadian troops out of joint operations we have with America.

Traditionally, we have been that 51st state, which has provided more military support to the US military. It would go over very well in Canada if we just did our UN military missions and ignored the ones with America. And we need to become more integrated with Europe in that sense as well because we are part of NATO and Trump has made negative comments about NATO. So who knows where that's going to go. But I think going forward Canada actually has to really tie in more with European military than tying in with American, because they're just doing so many things that Canadians disagree with.