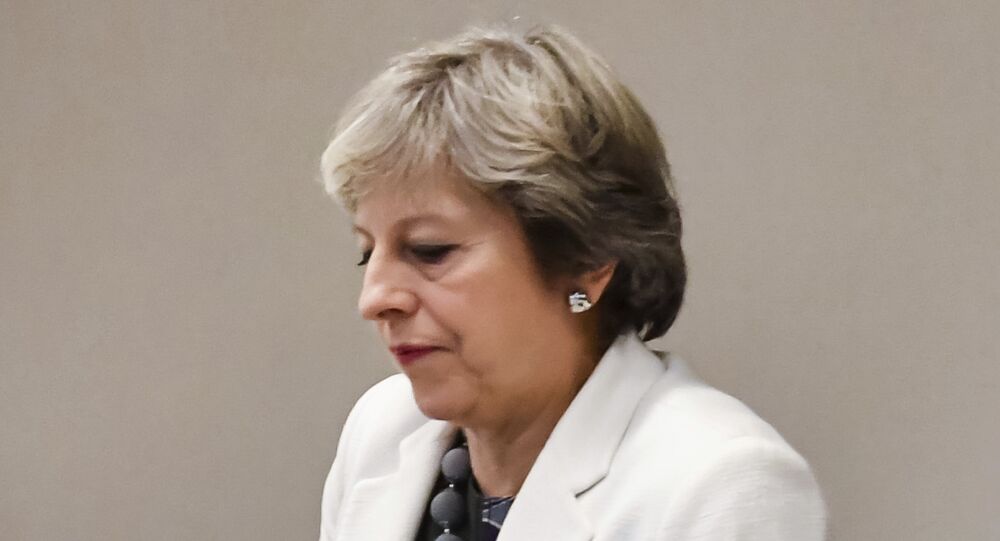 EU Council President Donald Tusk met with UK Prime Minister Theresa May on Thursday for “last-minute talks” ahead of the EU summit as she hoped to renegotiate her deal. But Tusk told May that the Brexit agreement was “not open for renegotiation”.

Sputnik: What can you say of the chaos that has really erupted in British politics lately, do you think that this may perhaps point toward a harder Brexit than previously thought?

© AFP 2021 / EMMANUEL DUNAND
Brexit, Migration & Budget: EU Leaders Discuss Controversial Issues at Two-Day Summit
Edgar Morgenroth: My own opinion has been for quite some time and a number of years that we are heading for a hard Brexit, but we are now seeing that we are potentially heading for a crash out Brexit, which is even harder than what is normally considered quite sort of severe. So it's quite possible at this stage that the UK would exit without an exit agreement and that would make it very difficult to negotiate further trade agreements subsequently because a no deal Brexit that is on the cards right now would really remove the basis on which you would do such negotiations. But the Brexiteers won the referendum and they always wanted a harder Brexit.

Sputnik: Yes, that's correct but there's so many other options right now and in the situation that the whole Brexit process is in right now there are a lot of other voices saying that we need to put this to the people. There's a lot of talk of a second referendum. There's a talk of revoking unilaterally Article 50 or delaying it. So with all of these things going on I'm wondering if you really think we are headed towards a harder or a no exit scenario?

Obviously, Theresa May has been upheld and I think, perhaps, by her own party in any case, two to one almost, and does that mean that she's actually closer to getting her agreement passed?

Edgar Morgenroth: The important thing is whether she can get the deal that is on the table across a vote in the House of Commons and that doesn't look very likely. The talk about delaying Brexit is quite misguided. Most of the people who talk about this have clearly not read the Article 50 of the Lisbon Treaty properly. The only people who can delay Brexit is actually the EU and it would require a unanimous vote to do so.

That's actually not that easy to get. The UK can't say: "Oh no, let's wait here". The clock is ticking, on the 29th of March they are either out with or without an agreement, or the EU would have to decide that they would want to extend it, or the fourth option, of course, is that the UK decides not to exit the EU at all. And they have now that option as the European Court of Justice suggested that is possible.

Sputnik: How likely is that option to happen?

© AP Photo / Virginia Mayo
EU to Publish Details on Preparation for No-Deal Brexit on December 19 – Juncker
Edgar Morgenroth: It is possible because even within the hardline Brexiteers not many want to crash out without an agreement. But the current agreement is pretty much the only show in town. It's not going to change. Theresa May wants to try and get some more change from the EU. The kind of changes that she is seeking are exactly the things that have been difficult for the last two years, and I don't really see any scope for such changes. So she's going to come back without anything substantive, she may get some political declaration about what the EU is hoping for, but this will not be legally binding.

That will not satisfy the majority of the House of Commons and so, in that case, she would be voted down, and that would then lead to a no deal Brexit. So it might be the case that to avoid that, the emergency brake is pulled and the UK actually stops the Article 50 process by saying that they no longer want to leave. That then causes all kinds of problems. It causes problems for Theresa May herself as there is at least a significant part of her party who do want to exit the EU and who will not accept that.

It causes problems for the EU because now they will have the UK as a continued member, but with a very difficult political situation and in anything that requires unanimous agreement it will probably be quite difficult to get the UK on side because, quite clearly, within the current British government there isn't unanimity on what their position on Europe or anything within Europe actually is. So we're in a very, very difficult position.

Sputnik: Definitely. Purely from an economic point of view what would be the best case scenario given all of the givens that we have before us right now for Britain?

And in each case, where there is a Brexit, the UK will always be the biggest loser, certainly proportionally. There has been quite a lot of research done; I've done some of this myself, that is quite unequivocal about that, that Brexit is economically a bad idea.

The views expressed in this article are solely those of Edgar Morgenroth and do not necessarily reflect the official position of Sputnik.