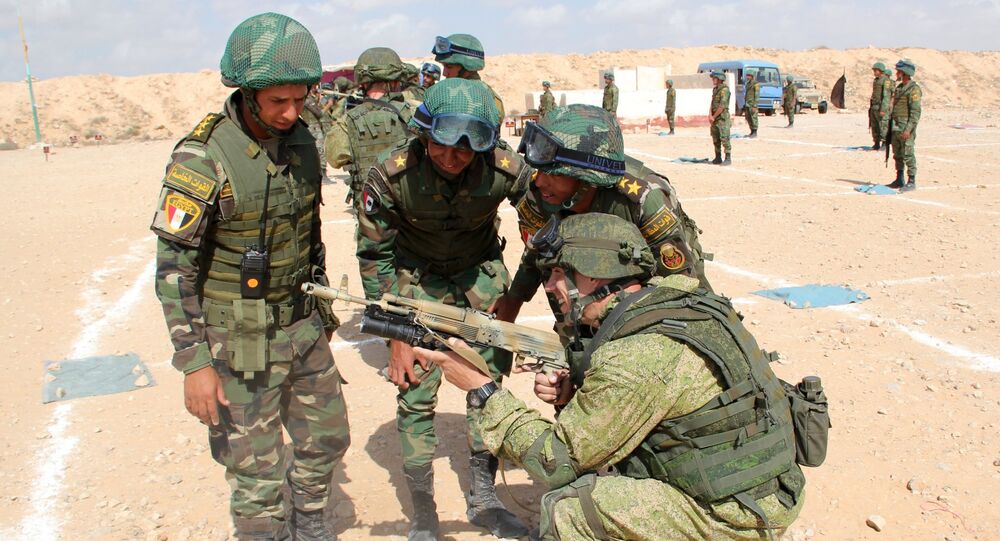 MOSCOW (Sputnik) - The fact that Russia, for the first time in history, ranked second among the world's biggest arms producers, is explained by the excellence of its products and the absence of political conditions for clients, experts told Sputnik in their comments.

On Monday, the Stockholm International Peace Research Institute (SIPRI) said that Russia became world's second-biggest arms producer after the United States, with the arms sales of the Russian companies listed among the world's 100 largest arms manufacturers having accounted for 9.5 percent of the hundred's total in 2017.

However, Russia is still well behind the United States in terms of arms sales, with the US arms-producing companies having for 57 percent of the total arms sales by the world's 100 largest arms manufacturers last year.

According to experts, the success of the Russian defence industry globally is explained by reliability and durability of Russian arms, which are far more affordable than those manufactured by other countries, in particular, the United States.

"In harsh combat conditions, when sovereignty or death is on the line, our weapons provide considerable assistance… We have the highest standards for arms certification. I doubt that some items of the US military equipment would meet [those standards]," Alexei Leonkov, a military expert and editor-in-chief of Arsenal Otechestva (Arsenal of the Fatherland) magazine, said.

Leonkov indicated that Russia had found unconventional ways of demonstrating combat advantages of its weapons.

"We demonstrate [our weapons' advantages] not only in combat conditions, as it was in Syria, but we have also invented Army Games, during which it is possible to look at these arms from a different angle when it is used in tactical military competitions… It impresses a lot of servicemen from other states," Leonkov indicated.

According to Alexei Podberyozkin, a military expert and director of the MGIMO University Center of Military and Political Studies, another convenience of the Russian arms consisted in the simplicity of their use.

"It is extremely important because arms should work in any conditions and should look simple," Podberyozkin explained.

© AP Photo / Pablo Martinez Monsivais
Trump Unlikely to Start Arms Control Negotiations With China, Russia - Scholars
Podberyozkin indicated that the fact that Russia had managed to topple the United Kingdom as the world's second-largest arms producer was the illustration of the country's progress in the industry.

Leonkov indicated that Russia's arms order portfolio will continue to grow in the future due to the growing popularity of Russian weapons abroad.

"An item manufactured based on the BMP-3 [infantry fighting vehicle], dubbed Sprut SD, capable of turning into amphibious tanks in a certain modification, is currently being introduced on the market. It enjoys keen interest especially in countries with a tropical climate and in countries with numerous islands, like Indonesia," Leonkov stated.

He added that Russia's great experience in building tiered air defence systems was being replicated by other countries, which sought to purchase all elements of that system.

"There is also a large industry — the maintenance of delivered equipment and arms, there is also the modernization of earlier delivered weapons and military equipment. All this might contribute to the increase of income from arms sales in financial terms," Leonkov indicated.

Experts have also shared their view that another reason for the growing popularity of Russian arms on the global stage was its affordability in terms of unconditional cooperation with clients.

"In these terms, we are more open than the United States. Let's take as an example the US Patriot surface-to-air missile systems, its adoption by the armed forces of this or that state is a sign of loyalty toward the United States. This means if you are loyal to the United States, you have Patriot systems if not, you do not have it. And our S-400 complexes do not require any loyalty from other countries… We are more attractive on the market also in this sense," Leonkov pointed out.

"We are very reliable partners, everyone knows it, and it is our important advantage. We do not impose any political conditions. The United States, since it has been controlling the world's finances, is capable of making difficult the lives of our arms' purchasers and threaten to do so," Podberyozkin stated.

According to Leonkov, Washington has many tools to influence the global defence industry, including sanctions.

"Just think of the sanctions that are being imposed against the countries buying our arms. This means it is a serious fight. We have now conquered a segment on this market, where the United States cannot compete with us," Leonkov argued.

Podberyozkin, in turn, revealed that the influence of the US anti-Russian sanctions was minimal.

"In fact, sanctions encourage the growth of our economy because we are developing home manufacture either in agriculture or in a knowledge-based industry. sanctions are targeting a different thing, they damage the purchasers of our production. They cannot buy our weapons by the means of US financial systems, for dollars. But we shift to payments in rubles and national currencies," Podberyozkin stated.

Experts. however, acknowledged that Russia had a long way to go to match the United States.

"The United States produces about 60 percent of the world's production, while Russia has only reached 10 percent. The difference totals 600 percent or six times, it is huge. The United States is, in fact, a monopolist on this market, and the fact that Russia got the honorary second place, surpassing the United Kingdom, does not mean that we have become comparable to the United States," Podberyozkin argued.

Leonkov, for his part, stated that Russia did not have the goal to become the world's first arms producer.

"The truth is that in the short and medium term the US military-industrial complex will remain the most powerful, because the United States not only supports its large armed forces and numerous military bases but also is the main supplier of arms to many countries of the world," Leonkov believed.

© Sputnik / Sergei Kazak
Russia Will Develop 'Unique' Weapons if US Exits INF Treaty - Senior Lawmaker
He stressed that if the defence industry market was as equitable as it is described in theory, Russia would manage to become the market leader, but the reality was different, with the United States playing against the rules.