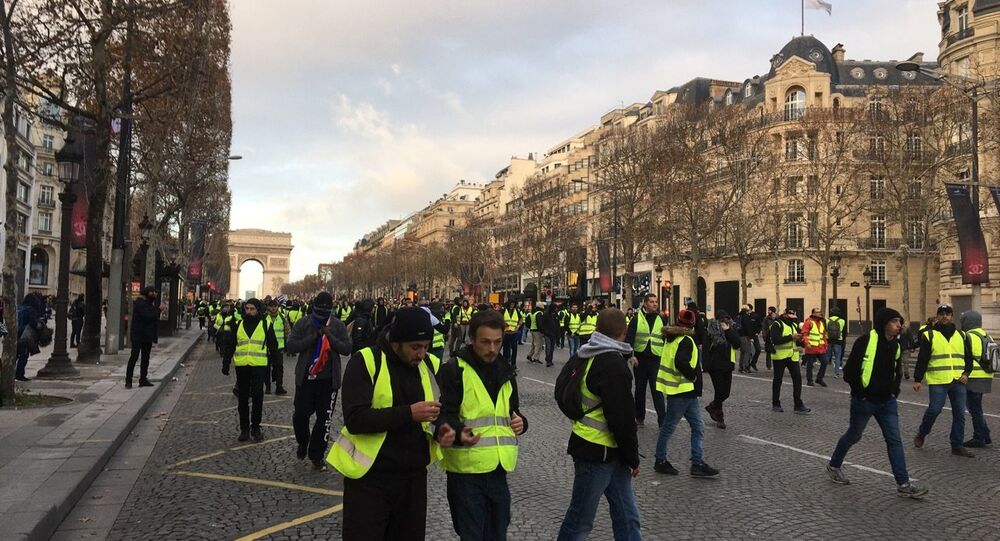 On 8 December, the 4th week of powerful demonstrations by the “Yellow Vest” protest movement covering all of France began. A wave of protests against rising fuel prices has spilled over to other European countries, although not on such a massive scale. How are ethnic Vietnamese living and working in France reacting to this situation?

Pham Phu Cuong, French political scientist of Vietnamese origin, a member of the People Council of Citizens of Logne, a suburb of Paris, and a direct participant in the "yellow vests" movement, has shared his vision of the situation in an interview with Sputnik.

Sputnik: Mr Pham Phu Cuong, you are a member of the Yellow Vests movement in the French capital. Are there any ethnic Vietnamese among the protesters?

Pham Phu Cuong: I study the problems of ensuring social justice. For 15 years, I have been actively involved in the political life of France. One can say I am of the first "French" Vietnamese participants in this movement. Before, ethnic Vietnamese rarely took part in the political life of the country where they live. Few of us overcame the feeling of some kind of our own "inferiority" and entered into a political struggle shoulder to shoulder with the indigenous French.

I made a decision to join the yellow vests movement as I have experience of political activity and have gone through the way of forming "political identity". And this movement is fighting for a just cause.

Sputnik: And how many times have you been to the protests with the French already?

Pham Phu Cuong: From the very beginning of this movement up to this day.

Sputnik: And yet why did you decide to take part? After all, there are some Vietnamese who condemn you. In their opinion, even though you are an ethnic Vietnamese, you are in fact a Frenchman. And now you go against France.

© REUTERS / Benoit Tessier
Students Protest in Paris Against New Education Fees (VIDEO)
Pham Phu Cuong: As I have already said before, in the history of France completely justified and fair protest movements rarely happened. Even though France is considered to be the world's "cradle" of revolutions. As far as we know, a number of protest movements were simply used by political schemers for their own purposes. However, in my opinion, the yellow vests movement can hardly be used by anyone for ill purposes.

I am a Vietnamese by blood but a French citizen. France has accepted me. I am not against France but against the stupid policies of the French government. When the government goes against the interests of the people, I must with all due responsibility take the side of the people. I have to make my contribution to the struggle against the national threat, that is, to act like a real, responsible citizen.

© REUTERS / Charles Platiau
Arc de Triomphe to Open Wednesday After Being Vandalized in Protests – Officials
I have only French citizenship, naturally, at the moment I live here. And the main thing for me is the bright future of my country. Of course, I do not forget Vietnam, where I was born and raised. And I very much hope that the day will come when I can apply my knowledge and experience for the benefit of the development of my historic homeland.

Sputnik: You have contacts with many French public figures. How do they assess the yellow vests movement?

Pham Phu Cuong: The French I talk with, mostly support it (according to public opinion polls, this movement that has been going on for four weeks is supported by more than 75% of French citizens). These are people who sincerely love their country. Such people as Emmanuel Le Roy, president of the humanitarian movement "Save the Children of Donbass", or Alain Soral, writer, sociologist, head of the Equality and Reconciliation political association.

READ MORE: Belgian MP on Why 'Western Europe is Turning Into a Third World Continent'

They believe that the current situation is a deep crisis for the whole of France, especially for the province, for the "far-flung provinces". The life of workers is becoming increasingly insecure. The life of the middle class is also deteriorating due to extremely high taxes. The right to freedom of expression is getting "clamped down" more and more. Crime and social stratification are growing.

Sputnik: Now there are many expert comments on the Web with regards to the events in France. They are reprinted by many major news agencies, other media, including popular Vietnamese newspapers. However, it seems that events are somehow not presented quite correctly. What is your opinion as a direct participant in the yellow vests movement?

© AP Photo / Kamil Zihnioglu
Leftist Party France Unbowed Leader Expects 'Yellow Vests' Protests to Continue
Pham Phu Cuong: In my view, one of the reasons for such a powerful development of this movement is the fact that the French realize the media hypocrisy in their country. After all, it is no coincidence that the administration of the President of France does not allow the Russian RT to work because it does not want to disclose this lie and make it publicly evident! This is ridiculous!

When it comes to intervening in the affairs of other countries, France here is a country that certainly respects human rights, freedom of speech, and so on! And now it is obvious that the French are losing confidence in their mainstream media and are looking for other sources of information. On the other hand, among those who conveyed information about this movement in Vietnamese, there are people who do not understand politics.

That is because they seem to live in France but do not realize themselves as part of the French people. I watched various news agencies deliver news from France and I have made sure that the Russian media reflect more objectively what is happening in our country right now.

Sputnik: Can we say that a new revolution is taking place in France? Can one call the "yellow vests" movement a "Paris Spring" or, more precisely, a "New Revolution"?

Pham Phu Cuong: Since "May 68" (when powerful protests of students and trade unions shook France in the spring of 1968) half a century has passed before the current events comparable in scale. Then President de Gaulle considered the protests to be a "carnival" (chienlit) (i.e. riots, turmoil) but they led to the dissolution of the National Assembly and to early elections!

© Sputnik /
'What Starts Out Small – Grows Big' - Dutch 'Yellow Vests' Activist on Protests
However, these two kinds of movements are fundamentally different. The yellow vests movement takes place without the participation of political parties and trade unions. At that time, the people of France, thanks to various sources of information, understood well the entire "democratic demagogy" of the Republic. They knew that the trade unions in France served the interests of capital and the government was only the executor of the will of the latter. The current protest movement shows that social justice is not just empty words for the French. We can say that the French found the courage to rise for the right to independently decide their own destiny, to build the future of the nation.

I believe that current events are a new revolution yet which is difficult to manipulate. It is "non-partisan", "supra-union". It occurs in the context of "multilateral information". So it cannot be called the "Paris Spring" if to draw any analogies between it and the "Arab Spring" or the "Velvet Revolution". It is not controlled and not conducted by any political force.

Sputnik: On your Facebook page you wrote: "..people in yellow vests are a great symbol of the victory of the French people, this is a tsunami! And there can be no force capable of hindering this wave. " Are you sure about that?

Pham Phu Cuong: Yes, I am sure that there is no power that can prevent this "wave". And, of course, as a result of current events, French society will change for the better.

The views expressed in this article are solely those of Pham Phu Cuong and do not necessarily reflect the official position of Sputnik.

Over 4,500 People Detained Since Eruption of Yellow Vest Protests - Reports