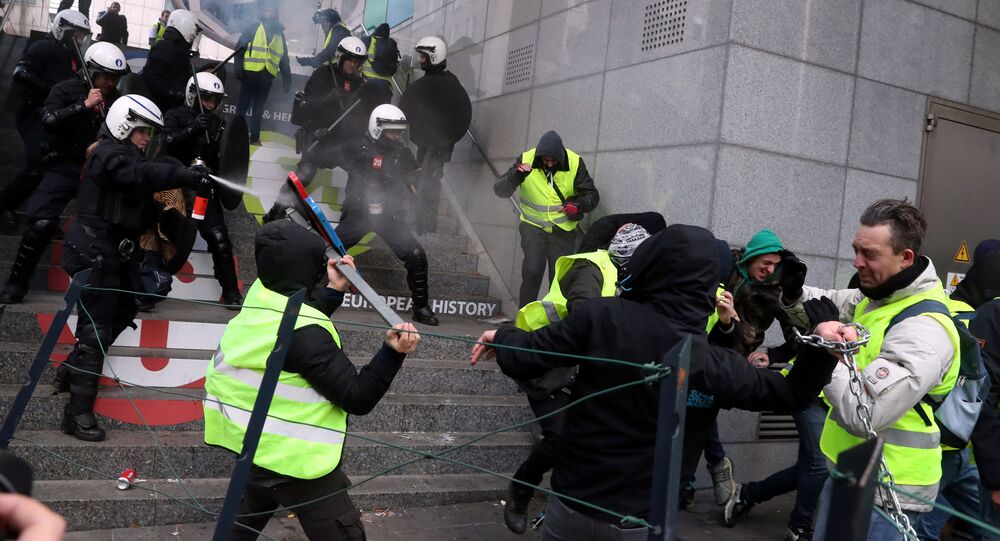 Western Europe is seemingly turning into a third world continent due to uncontrolled migration, Belgian MP Frank Creyelman told Sputnik, commenting on the ongoing government crisis in the country that coincided with the yellow vests demonstrations in neighbouring France. He has outlined "three things" that the Belgian government has done "wrong".

"There is a war going on for the minds of the people. No longer left or right, no longer conservative or liberal, but between globalists and patriots", says Frank Creyelman, honorary Belgian MP and former chairman to the Committee on Foreign Policy, European Affairs and International Cooperation.

On 9 December, the conservative New Flemish Alliance (N-VA) quit the ruling coalition over the UN migration agreement previously dubbed by the French right-wing leader Marine Le Pen "a pact with the devil".

The N-VA was one of the largest of four coalition parties. As a result, the Belgian Prime Minister, Charles Michel, who endorsed the migration pact, was left with a minority government.

The move came amid protests inspired by the "yellow vests" movement, which has engulfed France since November 2018. About 1,000 gathered in Brussels this weekend protesting against high fuel taxes and worsening living conditions for the middle class.

"The turmoil has short-term and long-term political causes", Creyelman told Sputnik. "The short-term cause is that 14/10 of all traditional political groups including the N-VA lost voters to the left wing groups (Greens, Communists) and to the right (Vlaams Belang). The N-VA was worried most as it is the biggest political group in Belgium and Flanders. Their secretary of state for Asylum and Immigration Theo Francken, the most popular Belgian politician, handled the Marrakesh pact behind closed doors for two years and silently hoped it would pass".

© REUTERS / Francois Lenoir
Belgium N-VA Party Threatens to Exit Ruling Coalition Over UN Migration Pact
The UN's Marrakesh pact, also known as the Global Compact for Migration, is a non-binding agreement that represents the attempt to establish a common approach to all aspects of international migration consisting of 23 objectives for better managing migration at local, national, regional, and global levels.

Despite the government's hopes, Vlaams Belang (VB) began attacking it on the Marrakesh pact as well as the Belgian leadership's poor results in handling the migration crisis in the country, the politician elaborated, adding that this had prompted four N-VA ministers to step down.

"The long-term reason is that common people are getting poorer and poorer", the Belgian MP emphasised. "The middle class is sinking away in a pool of taxes. And what does the government do: new taxes and on top of that spend billions on migrants, refugees and giving away money to corrupt African regimes. Top of the bill was the new minister on Finance giving 43 million euro to the South African government for some project".

© AFP 2020 / Remy Gabalda
'Yellow Vests' are Outcome of EU's Decade-Long Austerity Measures – Activist
According to the parliamentarian, "the same South African government kills off the Boer people (descendants from Flemish and Dutch settlers) by the thousands and seizes their land and farms without compensation".

He highlighted that "people are also fed up with globalist elites that take decisions in Davos without consent and giving them the bills". "This is a widespread feeling among the Western European peoples", he said.

Commenting on the "yellow vests" protests spilling over from France into Belgium, the politician noted that the demonstrations that had started in France had spread to the French-speaking part of Belgium. "Less activity on the Flemish side although the same issues play a role, even all over Western Europe", he added.

"It is because of high taxes, middle class sliding away, money spending on issues people don't want", Creyelman stressed explaining the reasons behind the protests.

As for Prime Minister Charles Michel, his problem is obvious — "his government now represents 30 percent of the Belgian population and has no majority at all in parliament", Creyelman remarked.

"NVA said it would be a ‘constructive opposition'", the MP elaborated. "But one day later two excellencies where already quarrelling about… immigration. In practice it will be one big electoral campaign until May or the government decides to pull the plug out right know. But as the N-VA gains a little again in the polls 'because they followed their principals' (which is really ridiculous) and Vlaams Belang too it is not so easy to go to elections on the issue of Marrakesh. All will lose but the N-VA and VB".

© Sputnik /
Yellow Vests Revolution Drives Beyond France's Borders - Author
Creyelman did not rule out that the two patriotic parties could form a new coalition.

"That might make a coalition (if the N-VA overcomes their hatred towards VB) of both patriotic groups in the Flemish parliament possible and if no federal partner on the Walloon side is found it could be the end of the Belgian state", he said, adding that "of course this is highly theoretical".

According to the parliamentarian, "the government did — in the eyes of the people — three things wrong: too many taxes, too much uncontrolled and illegal immigration with lots of crime, and too few economic results".

"Mainly people are seeing that Western Europe is turning into a third world continent and that the original population is being replaced by Muslims and black Africans", he concluded.