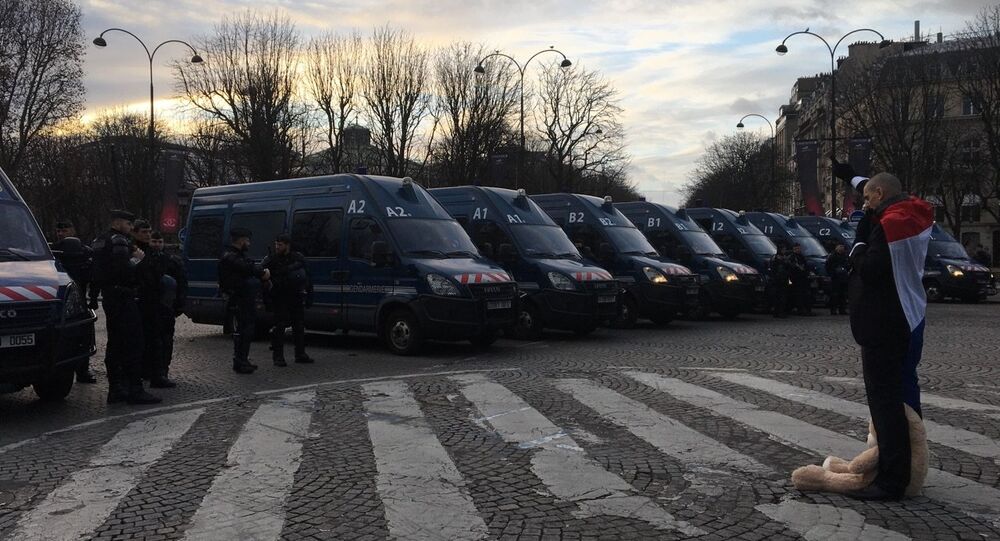 While French authorities are on high alert due to Yellow Vests protests all across the nation, similar rallies have started in the Netherlands. Sputnik sat down with Rogier Hop – a Dutch Yellow Vests activist from Maastricht, who is also filming the protests, to discuss the reasons that brought people to the streets in his country.

Sputnik: The Yellow Vests rallies in France started out as a protest against the increased fuel tax. In Holland it's not the issue. What are the reasons behind the protests in the Netherlands?

Rogier Hop: There are lots of reasons that people are wearing the yellow vest, and there is no real "prime" reason. There are many factors why people are wearing the yellow vest. Holland, for example, is a very corrupt country. Everything is "being put under the rug", and they don't want to talk about it anymore. So, that's my reason for protesting.

Sputnik: It seems that protests in Holland are not as violent as they are in France or in Belgium. And yet, arrests have been made by police in different cities. You also had your share of "police attention" when your camera was taken away during a rally by police agents, and you said that they destroyed the evidence. What happened?

Rogier Hop: I was filming an arrest of our leader, [the leader] of the group in Maastricht and he was caught by undercover cops. But these cops didn't want to be on camera and one of these cops came up to me, and he was like "you're going to give me the camera right now, or, otherwise you're gonna go to the police station". So, that's why I gave the camera.

Sputnik: Were you able to get it back, and if so, was the video still there?

Rogier Hop: They only destroyed the arrest that I filmed, and the other films — I still need to publish them, but they are still on the camera. Only the arrest was taken away.

The Yellow Vests movement seems to be spreading quickly in the Netherlands. The activists are posting online this map of protest activity. https://t.co/7692w2LSZn

Sputnik: We see the protests spreading across the country, with rallies not only in Maastricht, but also in The Hague and in Rotterdam. Do you feel that the Yellow Vests movement in Holland is growing?

Rogier Hop: What starts out small — grows big. This has started as very small, but it's gaining traction. More people are aware of the yellow vests — not only what's happening in France or in Belgium. But now they are seeing (it) in their own country. Some people are wondering why, and then when you explain, and they know, they join the Yellow Vest movement. It's still in its early stages, but it's growing.

Sputnik: Mainstream media in the Netherlands is covering the protests. One of the outlets just wrote an article about you and about the police destroying your video. Does it seem like mainstream media is doing a good job in reflecting what's happening?

Sputnik: So, can we say that this movement is the "movement of general discontent"?

Rogier Hop: Towards Dutch politics — yes, we can.