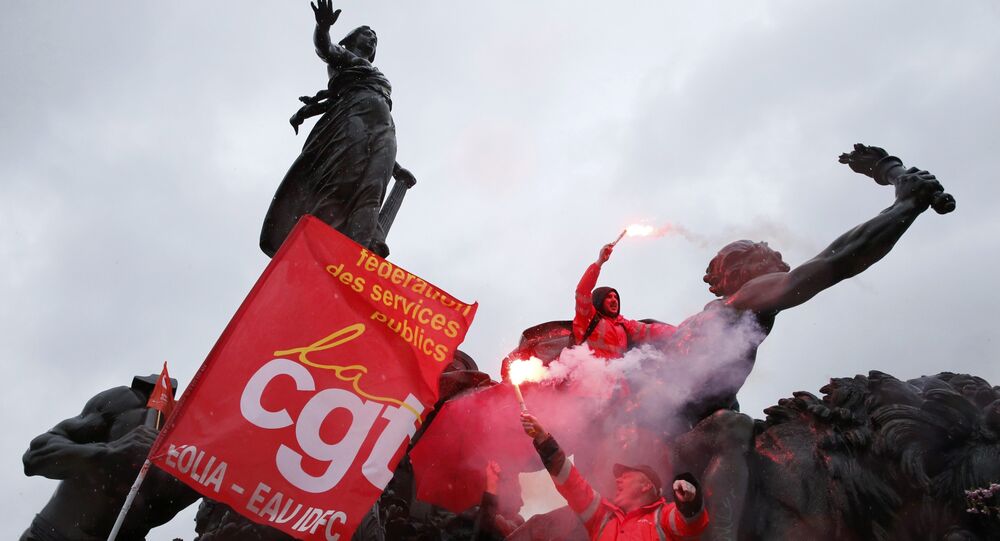 French President Emmanuel Macron addressed the nation Monday, announcing new initiatives he hoped would stem the boiling Yellow Vests movement, which didn’t dissipate after the first round of compromises. Instead, the movement is widening, including anti-racist groups and trade unions, which announced a “national day of action” for December 14.

"When violence exists, freedom stops," Macron said during his speech in the Elysees Palace. "Calm and order must be enforced, and we will deploy every means…. I have ordered the government to implement rigorous measures."

"Many French citizens share this indignation and this anger" that started the protests, he said. "In many ways, this anger is legitimate."

Among Macron's promised reforms were an increase in the salaries of workers by 100 euros per month beginning in 2019, without cost to employers; no taxes on overtime pay; and the cancellation of a tax increase on pensioners' social security.

However, Macron stopped short of undoing his 2016 reform of the "Impôt de solidarité sur la fortune," or ISF, a tax on those with over 1.3 million euros in assets. His government scrapped that program, replacing it with one that only taxed real estate, leaving financial assets untaxed.

"We can't go back. This would weaken us; we need to create jobs," he said, promising instead to crack down on tax evasion and the abuse of loopholes.

"Emmanuel Macron thought he could hand out some cash to calm the citizen's insurrection that has erupted," Jean-Luc Melenchon, leader of the far-left La France Insoumise, said, according to Reuters. "I believe that Act V will play out on Saturday," he said.

The Gilets Jaunes, or Yellow Vests, have been demonstrating across France since mid-November, with as many as 4,100 people reportedly arrested amid hundreds of thousands of protesters. About 80 percent of working class respondents to a November 28 poll expressed sympathy for the movement, while just 56 percent of managers and white collar professionals did so, according to The Nation.

​While some of the initial calls for demonstrations were made by politicos affiliated with the right wing, such as Frank Buhler, an ex-Front National member who sounded the call for demonstrations in Paris itself, the movement has been largely directionless in its demands, which span the political spectrum.

Initially driven into the streets in an uncoordinated manner by a planned hike in fuel taxes, the movement has continued to diversify, embracing causes from both sides of the aisle, including demanding a return of the tax on fortunes and the withdrawal of all French troops from foreign soil, but also the repatriation of migrants who don't pass entrance tests and forcing them to adopt French culture.

That's left a gap that the French left has been reluctant to exploit, but it is increasingly seeking opportunity. It's an old strategy called "convergence des luttes," or the convergence of struggles, that's served it well in the past. While Melenchon has joined the Front National's Marine le Pen in calling for the dissolution of the National Assembly and new elections, one of the largest trade unions, the General Confederation of Labor (CGT), announced a nationwide "day of action" on December 14, although it has not yet directly endorsed the Yellow Vests.

Likewise, the anti-racist group Adama Committee, which fights against police violence and racist attacks against migrants, moved to embrace the Gilets Jaunes, too, saying, "Today, we are against Macron, and we must not let the extreme right occupy the field."

"Who can talk better about unemployment than us?" Adama member Assa Traoré asked, referring to suburban residents, according to l'Humanite. "Who can talk better about purchasing power than us? Popular neighborhoods suffer the wages of misery. The trip from Paris to Beaumont-sur-Oise by car is 50 kilometers round trip. The increase in fuel prices directly affects us. We can not talk about all this without talking about police violence; it's a reality in our neighborhoods. This movement of yellow vests belongs to us, too."

"Every time revolts are expressed in neighborhood violence, we hear reactionary rhetoric about why young people in rural areas do not move? We must be on the offensive and cut the grass under the feet of the fascists," Adama member Youcef Brakni told l'Humanite.

Brakni stressed the similarities between the Yellow Vests and working-class neighborhoods. "It's men and women who cannot live anymore. Add to that the arrogance of Macron, his contempt, his condescension."

Radio Sputnik's Loud and Clear spoke with Gilbert Mercier, French journalist and author of "The Orwellian Empire," about Macron's speech and the impact he thought it would — or wouldn't — have on the movement.

​Mercier said the accommodations, such as removing taxation on overtime pay, were "another bone to throw at people." He also said the end-of-year bonus Macron requested employers give out was "sort of the strategy of the lord of the castle, of the king, throwing a few gold coins to the peasants, you know, just to keep them quiet… I don't think it's going to be enough."

Noting that Macron invoked the Rousseauian language of writing a "new social contract," Mercier told hosts Brian Becker and John Kiriakou that the French president was "kind of trying… he understands the notion that the Gilets Jaunes do want a direct democracy, so he will go to the mayors and consult with the mayors more and more."

"Is it going to be enough?" Mercier said he wasn't sure. "It's definitely a gesture, but is it going to be really followed up in time and address more systemic issues? Not exactly."

Mercier said it was obvious that Macron was "trying to defuse a major social crisis by throwing a little bit of money at the problem. But he didn't say, for example, that he's going to reform, and going from, like, a top-down society, which France has unfortunately become, to something that is a lot more democratic. He did invoke that, but not in any great deal of detail."

"You're right," he told Becker, who'd invoked the memory of the February 1917 revolution in Russia, "those kinds of movements, they sort of have a mind of their own. And I mean, you mention [Vladimir] Lenin, but it was the same in the French Revolution: first you had [Comte de] Mirabeaus and [Georges] Dantons, which were ready to make compromises. Then it became [Maximilien] Robespierre and [Jean-Paul] Marat, who were not willing to make any kind of compromise."

Mercier told Sputnik that several "reasonable Gilets Jaunes" had appeared on French TV, but that "even they didn't really buy" Macron's attempts to defuse the situation. "I don't think it's really addressed the systemic problem. They're trying to defuse it before Christmas so the French merchants can start making money again, because it has really been affecting the bottom line of the French economy… it's about 10 billion [euros] so far."

"What I think is needed, and eventually I think the Gilets Jaunes will request that, if the violent part of the protests simmer down, is what they had in France in 1789, which is the États généraux [Estates-General], and that's what needs to happen to have a shot at real democracy, like the type of democracy that they have in Iceland, for example, where people can be actually heard."