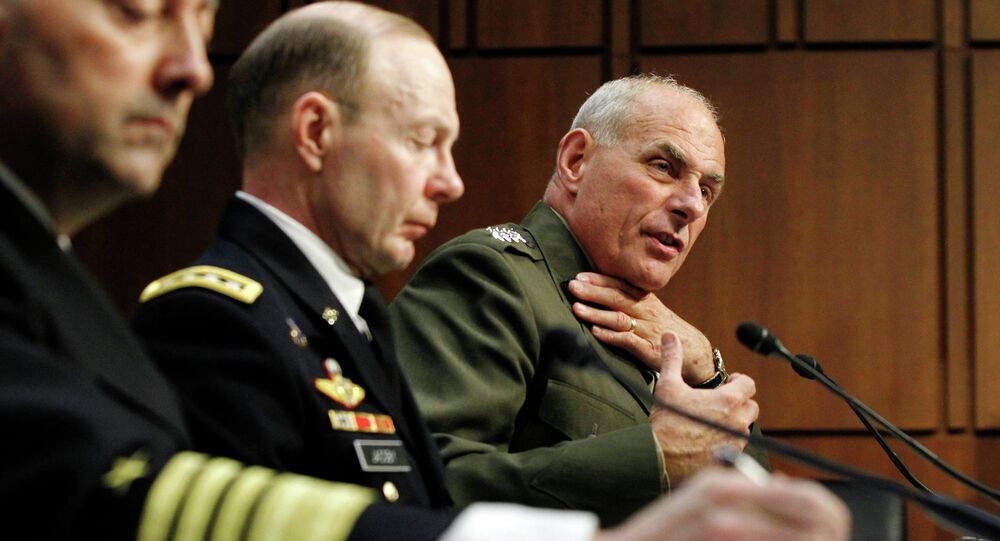 US President Donald Trump is yet to name his new chief of staff since he announced over the weekend that John Kelly, the current White House chief of staff, will leave his job by year's end. Sputnik has discussed this with Rogers Smith, professor of Political science — Associate Dean for Social Sciences at the University of Pennsylvania.

Sputnik: Why could have prompted the president to let Kelly go now?

Rogers Smith: It's not unusual for an administration to make changes after midterm elections especially one that didn't go well for the president's party, but it's also true that John Kelly's military style has clashed with the president almost since he took the job and it has been clear that they aren't working together successfully.

It's also true that the president wants a more politically-minded chief of staff as he turns his attention to the 2020 election.

Sputnik: Nick Ayers is largely believed to be that person, that politically-minded chief of staff, albeit he's only 36 years-old, it's been reported that he has family commitments and wants to return to Georgia by the school year, whereas Donald Trump is going to want a two-year commitment. What do you think of Ayers? Is he going to be the one that Donald Trump is going to name or try to appoint as the next chief of staff.

© REUTERS / Jonathan Ernst
John Kelly's 'Hissy Fits' Hurting Donald Trump - Ex-White House Media Chief
Rogers Smith: I think you're right it will depend on whether Ayers, who is a young man with a young family, is prepared to make the kind of commitment that Donald Trump wants.

Reportedly, Ayers is reluctant to do so and that's why we haven't had a new chief of staff announced yet. The president will choose whoever he thinks will do the kind of job he wants best and that is the political campaign. At the same time Ayers does not have the experience beyond being Pence's chief of staff in the national government. So there's also going to be some pushback against the Ayers choice from those who feel he's too inexperienced.

Sputnik: And yet, Trump is looking at the 2020 elections and he wants somebody more political. If we talk about Kelly, he's a 68-year-old general, he's a military man and there's always been a lot of infighting in the White House. It's said of Kelly that he was able to overcome that infighting and he created an air of stability, whereas people are saying that Ayers, he's got this mod hairdo, sort of a boy band hairdo that people are talking about, and just this sort of completely different air about him. There's a lot of speculation as to whether he'll be able to deal with the other members of staff.

© AP Photo / Mary Altaffer
'We're in Crazytown': New Book Claims Kelly Called Trump an 'Idiot'
Rogers Smith: Exactly, John Kelly had a lot of prestige coming into the position. He did have a military background wanting discipline, order, control, a style that does not match with President Trump's, who has run a private business the way he wanted to do it for many, many years. So, the clash between Kelly's style and the president's style helps explain why that didn't work out very well.

At the same time, if Ayers comes in and is simply concerned with the campaign then there will be lots of people in the White House and in the executive branch who will feel frustrated that the White house isn't being run in an orderly fashion as Kelly tried to do.

Sputnik: What do you think it was about Kelly, they weren't on talking terms, that's not very normal is it? Or is that kind of the situation now with Donald Trump because he has difficult relations. He's had 28 people leave or be fired since he's been in office. It's only half of his term, this is unprecedented.

Rogers Smith: We've never seen so much turnover and it is combined with the fact that there are actually a lot of positions that have never been filled in this administration.

© AP Photo / Mary Altaffer
Trump Announces Chief of Staff John Kelly Will Resign at End of Year
The president does operate in this highly personalistic style and what we're hearing about Kelly's frustrations are identical to the frustrations that we're hearing from a number of other people who've left the administration like Rex Tillerson, who clashed with the president just in the past week over what it had been like for them to work together.

Both Kelly and Tillerson were quoted as having made highly derogatory remarks, not only about the president's style, but also about his intelligence and grasp of issues.

Sputnik: So do you think Ayers would prove to be much more loyal?

Rogers Smith: Absolutely, I think that is a big part of his appeal. I think he's shown himself to have the two qualities that the president values most highly, that his loyalty to the president and concern for the marketing and branding of this presidency effectively.

The president is a highly accomplished salesman. That's what he's been through most of his career and he wants someone to work with that understands how to do that effectively on behalf of the Trump brand.