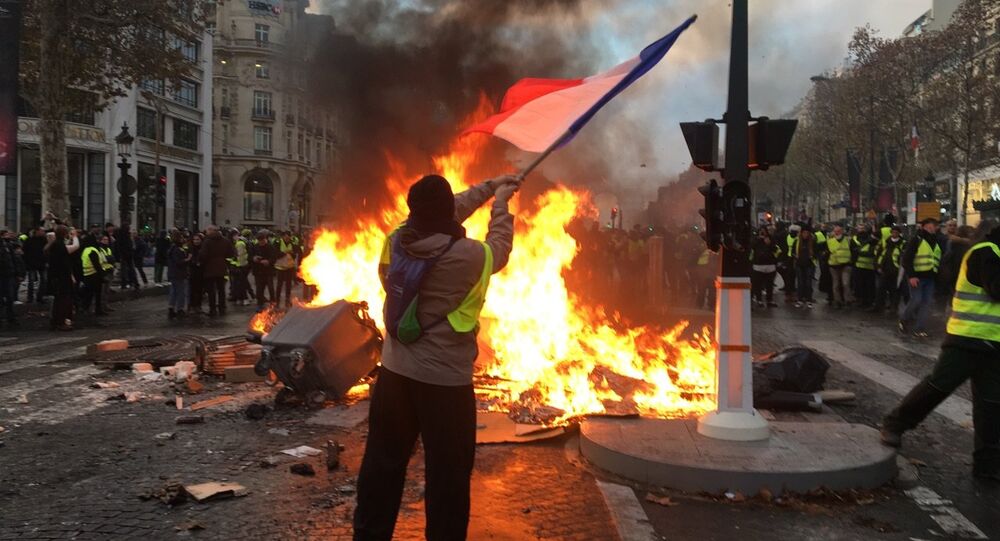 The "yellow vests" movement evokes strong memories of the Sans-Culottes of the late 18th century, French journalist and author Gilbert Mercier told Sputnik. Paris's attempts to brutally crack down on the more radical protesters may backfire on the Macron government, according to the author. However, he doubts that Emmanuel Macron will resign.

The "yellow vests" movement is continuing to gain momentum in France. By December 8, almost 1,385 protesters had been arrested nationwide, according to Interior Minister Christophe Castaner. During  Saturday's protests alone, 135 people were injured across the country, including 17 police officers.

Sputnik reached out to Gilbert Mercier, French journalist, editor in chief of News Junkie Post and the author of "The Orwellian Empire", asking him to comment on the latest developments in France.

Sputnik: Are there any signs indicating that the turmoil will disperse in the near future? What's your take on the recent developments?

Gilbert Mercier: There are no signs of the Gilets Jaunes [Yellow Vests] movement calming down. As matter of fact, it is becoming a wider demographic as the high school students have joined in the protests in a massive way, which has spread through the entire country. The Gilets Jaunes are scheduled for other protests all over France, and notably in Paris, where the Macron administration deployed 8,000 cops as opposed to 5,000 last weekend, when many clashes occurred at and around the Arc de Triomphe and on Rue de Rivoli.

© AP Photo / Francisco Seco
Brussels Police Detain 450 People in Yellow Vest Rally (VIDEOS)
Nationwide, 89,000 cops and gendarmes were mobilised on Saturday, December 8. In what can be viewed as a tendency to increase the repression, 12 armour vehicles from the Gendarmerie will be deployed in the capital. Obviously, the strategy of the Macron administration is not to compromise with the Gilets Jaunes, but to crack down on the radical segment of the movement. This tactic of bare iron fist police repression with an extensive use of tear gas, flash ball guns and even armour vehicles could easily backfire on the Macron administration, and harden the resolve of the Gilets Jaunes.

Sputnik: What's your assessment of the movement? Has France faced anything like it during the past several decades?

Gilbert Mercier: Some analysts are comparing the Gilets Jaunes movements to the May 1968 events in France which resulted essentially in the resignation of General de Gaulle, president at the time. But as I indicated in a few interviews on Sputnik "Loud & Clear", and in my new analysis in News Junkie Post, this analogy is historically, demographically and sociologically inaccurate.

The 1968 events were led by neo-Marxist Parisian students, largely the sons and daughters of the fairly well-to-do bourgeoisie. It was a generational movement for "Peace and Love", not like the Gilets Jaunes, who are mostly working class people and poor retirees fighting for bread and butter and to be able to keep a roof above their heads. It is too early to use the word revolution, but we certainly in some sort of preliminary stages of such a process, which is very similar to the dynamic of the French revolution of 1789.

In this regard, the Gilets Jaunes of 2018 have a lot of similarity with the Sans-Culottes in France towards the end of the 18th century. The Sans-Culottes were both the driving force and later the foot soldiers, and defended the new republic, in the unique event that was the 1789 French revolution.

© Sputnik
A protester wounded during "Yellow Vests" protest in Paris on December 8, 2018.

For the record, I was the first analyst, worldwide, to make this sociological and historical analogy between the Gilets Jaunes and the Sans-Culottes of 1789 on Sputnik's show Trendstorm, which was recorded on November 29. That said, even though most Gilets Jaunes do not articulate their movement with a Marxist narrative, as they claim to be apolitical, the Gilets Jaunes is indeed, in essence, an anti-capitalist movement. Symbols of wealth such as luxury stores they can't afford or banks have been prime targets for what the French media call "les casseurs", as if they were street thugs and hooligans without political motives.

Sputnik: What's your take on French President Emmanuel Macron's handling the problem? Could the nationwide protests result in his resignation? How will the situation unfold in your opinion?

© AFP 2021 / Abdulmonam Eassa
Yellow Vests Protests: Paris Police Countermeasures Reportedly Leaked
On Saturday December 8, the protests and the incredible level of repression turned Paris into a ghost town for its regular residents. Stores were boarded up and closed; most museums were also shut down in surreal scenes for the City of Lights. Even though they are taking their toll on the French economy, which has already lost 15 billion euro and counting because of it, the Gilets Jaunes protests, whether peaceful in the form of strikes or more violent like on December 1, will not die down. As a matter of fact, early next week, 50 percent of France's truck drivers will start an open-ended strike. More farmers will join in as well.

So far, overall, more than 1,500 people have been arrested and detained, but this doesn't solve the Macron administration's numerous problems. They are focusing on repression and order in a landscape which resembles more and more the reinstatement of the state of emergency-which lasted two years in France, from November 13, 2015 all the way to 2017-or even worse, martial law. I think that eventually, under vast popular pressure, Macron will have to dissolve the National Assembly and call for new elections.

This will result in a new government, with, of course, a new Prime Minister. While many Gilets Jaunes are demanding Macron's resignation, which is unlikely, two political parties have expressed the opinion that the dissolution of parliament is a step towards the resolution of the current crisis. The parties in question are the Rassemblement Nationale of Marine Le Pen on the right, and La France Insoumise of Jean-Luc Melenchon on the left.

READ MORE: 'The French Government is Out of Touch With its People' — Political Commentator

Sputnik: Is it possible that some state or non-state actors are involved in fuelling the protests?

Gilbert Mercier: Some foreign observers have wondered if the Gilets Jaunes movement was fake and perhaps manipulated or funded by some foreign interests. In brief, if it was a "colour" revolution like the fake orange revolution in Ukraine, which was clearly funded and orchestrated from abroad for the geopolitical gain of the NATO alliance.

I can say categorically that the Gilets Jaunes movement is real and not a "colour" revolution. It is fiercely independent of even French political parties, a purely spontaneous popular grassroots movement trying to invent a form of direct democracy. It is way too early to talk about a Gilets Jaunes revolution, but its impact has, in a matter of less than a month, already altered French society and its political landscape.

It is, as a matter of fact, already spreading outside France to countries such as Belgium, The Netherlands, Germany, Bulgaria, and Serbia. It is not a populist movement, in the sense of the far-right neo-fascist nationalist/populist, but a popular inclusive movement without racist notions of exclusion and fear of being "invaded" by immigrants with dark skin or another religion.