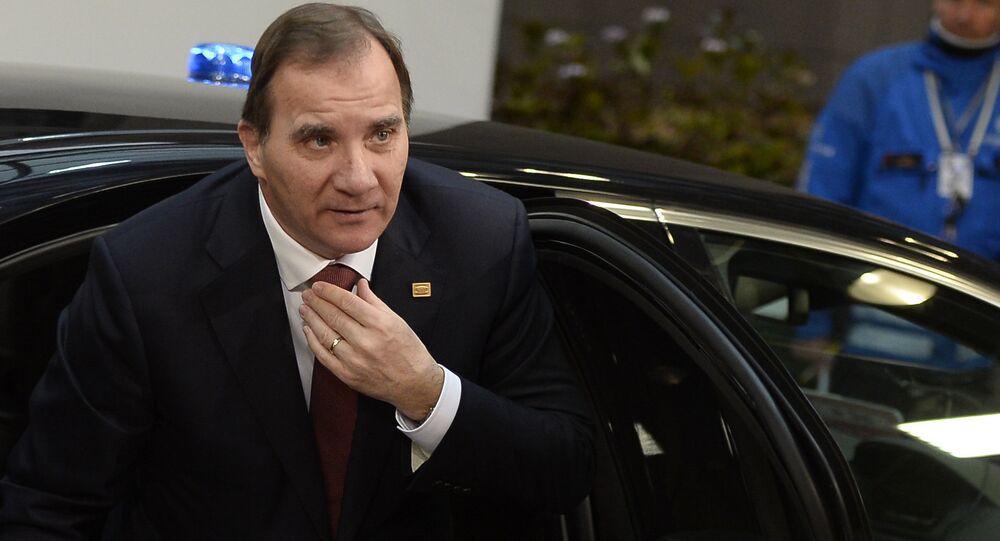 The seeming inability of Swedish parliamentarians to form a new government is nothing short of a political theatre to isolate the Sweden Democrats and return to business as usual with the liberal Social Democrats holding the reins of the country, Professor Bilyana Martinovski, a Sweden-based academic has told Sputnik.

"There is no stalemate in Sweden", Bilyana Martinovski, associate professor in Human-Machine Interaction, told Sputnik commenting on the Riksdag's futile attempts to form the government. "There [has been] an ongoing cultural, moral and political crisis for at least a decade in Sweden but no stalemate".

It was reported on 4 December that acting Prime Minister Stefan Löfven, the leader of the Social Democratic Party (S), was given more time to find support for a government coalition following the Sweden Democrats' (SD) advance in the country's general elections, which took place on 9 September, 2018.

The elections ended with three parties taking most seats in the parliament: the Social Democrats, the Moderate Party, and the Sweden Democrats. However, neither of the established blocs in the Riksdag wants to form a coalition with the patriotic SD. For several months, politicians have been struggling to secure a majority of the parliament's approval for a new government.

"Nothing changed in Sweden's governance since 2014 and even since 2010", the academic emphasised. "[The] Social Democrats and Greens coalition is still in power since 2014, although the parliament voted ‘no confidence' in Löfven and his government after the 2018 election".

© REUTERS / Jon Nazca/File Photo
Liberal Bill Pushes Sweden Into 'United States of Europe'
She pointed out that "the only party which grows on its own and in total political isolation is the SD".

"Socialists are in decline, the Alliance [formerly the Alliance for Sweden] is in decline, although they called the shots for a decade and although the Alliance is a fake ‘right-wing' [party]", Martinovski noted. "Neither coalition nor party got 175 seats in order to build own government. They had to cooperate across the blocs, but instead of cooperating, they chose to govern in minority in order to isolate SD patriots".

The professor explained that actually Sweden had been ruled "by so called minority governments since 2010, i.e. political coalitions, which have no majority of overall seats in the parliament". For instance, between 2010 and 2014 "Reinfeldt's Alliance coalition kept executive and legislative power with no majority in parliament and Socialists let them do it", she elaborated.

"Similarly, in 2014-2018, the Social Democrats and Greens coalition led by Löfven retained executive and legislative power with a minority in parliament", the academic said, adding that despite the 2018 election, nothing has changed: "The Socialist-Greens minority government continues to retain executive and legislative power with minority seats in parliament and the Moderate Party continues to evade responsibility".

© AFP 2020 / TT NEWS AGENCY / JANERIK HENRIKSSON
Rise of the Right in EU: 'People Don't Want to be Raped and Robbed' – Academic
She pointed out that de-facto, the Social Democrats and Greens, together with the Alliance, had been ruling the country for the last 8 years.

According to the academic, the formation of a coalition government comprised of the Greens, Social Democrats and the Centre Party "was the obvious intention even before election, one can't claim to be surprised".

"Re-election is regularly mentioned by MSM and politicians create a sense of suspense in the theatrical ‘negotiation' play entitled ‘Stalemate', or as a friend calls it ‘Boxers without Arms'", she noted. "Given the above context, re-election is unlikely, despite the fact that about 30 percent of the voters demand it also due to suspected election fraud".

She summarized that "in short, the well-being of the citizens and the country as such are less important than the artificially instigated polarization, conflict, brutality and disruption of the Swedish society caused by outside and inside transnational corporate and personal agendas".

'Soros Admirer' and Her Bid to Become Next Swedish PM

After conservative Moderate Party leader Ulf Kristersson's bid did not command support in the parliament on 14 November, speculations emerged that the leader of the Centre Party, Annie Lööf, could become the next Swedish prime minister. The Speaker didn't offer a chance to the Sweden Democrats to build a government, although SD got double as many seats as the Centre Party, and almost as many seats as the Moderate Party.

"Has Lööf done something for Sweden or Swedes? No", the academic said, commenting on the issue. "She didn't even express empathy for her co-citizens, female victims of sadistic gang rape violence by alien males, instead she said on air that she wants 30 million more newcomers in Sweden and then forced Swedish children and women to go to school together with adult MENA [Middle East and North Africa] men with high gang/rape propensity".

© AFP 2020 / ERIC PIERMONT
Scapegoat or Bully? Why EU Right, Erdogan and Facebook Gang Up on Soros
In her previous interviews with Sputnik, Martinovski shed light on the largely neglected sexual crimes committed by Arab migrants in Sweden.

According to the professor, "there is nothing liberal about this, nothing voluntary, nothing humanistic, just the opposite".

At the same time, Lööf is largely regarded as a George Soros sympathizer. The Hungarian-born US billionaire is known for his pro-migrant policies, which have been harshly criticized by European conservatives over the last few years.

Lööf was cited as saying: "I have no personal relationship with Soros, but I would love to have one — a strong, brave person who has done and does a lot of good".

"Lööf did say she admires the American billionaire who acts like [the] EU's Godfather and who funded the training of Swedish leftist extremists in Expo.se [government supported organization], meddles in European politics and finances even by shorting European currencies, by evading taxes in the US, and by violating charity laws via a mafia-like global network of hundreds of 501C3 foundations. In fact, the media pre-selected Lööf as a prime minister even before the 2018 election, just like they pre-selected Macron", Martinovski underscored.

Meanwhile, the Swedish government is imposing its leftist and migrant policies on the people of the country, the academic noted.

"As temporary minority government (expeditionsministär), the leftist coalition nationalized two TV channels and the Swedish Radio… All citizens are now forced to pay for the extreme leftist government propaganda and censorship, which breaks voluntary and free market principles", she said, adding that at the same time, Stockholm is cracking down on the critics of government policies and critics of Islam.

© AFP 2020 / Claus Fisker / Scanpix Denmark Scanpix
Denmark to Isolate Returning Jihadists, Criminal Migrants on Deserted Island
As for migration, "Sweden gave residency to more than 100,000 migrants only in 2018, few if any are deported, the gang/rapes continue, and the cover up of MENA criminals continues", the professor stressed.

"More than half a million mainly MENA migrants got residency during the Social Democrats and Greens coalition, very few of them are refugees, mostly general and chain migration", she added.

But that is not all. Only part of these newcomers was "refugees", she highlighted: "806,155 people were awarded residencies in Sweden between 2013 and 2018, i.e. almost 10 per cent of the entire population; of these, only 88,600 are refugees, the rest are other types of migrants, according to the official statistics.

"These are only the aliens who got residency, imagine how many more aliens got in, so many that the authorities lost control", she emphasised.

© CC0
'Completely Shameless': Sweden's Largest Party Caught Peddling Lies About Right-Wing Rivals in Arabic
Those who oppose the government's migration policy are vilified and marginalised as "racists" and "Nazis", the professor noted.

"The mainstream media and politicians want us to believe that there is a battle between nationalism and globalism similar to this in the 1930s and that nationalism is bad, because Nazism (Nationalsozialismus) was bad, and that globalism is good and inevitable", she elaborated, denouncing this approach as an "oversimplified polarizing script".

As a result, "the concepts of sovereignty, nationalism and patriotism have been consciously blurred and/or demonized", she underscored.

"The past and current minority government committed and commits treason on two accounts: by knowingly enforcing MENA violence among civilians with most sadistic bloody consequences and by violently persecuting peaceful critics of its policies who come forward with facts and data", the academic opined.

Martinovski referred to the fact that The Economist, Bloomberg and other MSM falsely claim that the SD has "neo-Nazi roots".

In reality, "SD is a rather young leftist party founded in 1988, which wants to stop the treasonous MENA influx and regulate general migration, nothing more complicated than that", she stressed.

In contrast, the Social Democrats do have Nazi roots and Annie Lööf's Centre Party, the former Agrarians, "were friendly and supportive of Hitler during WWII", Martinovski said, referring to the 2018 documentary "One People, One Party", which shed light on the county's controversial past.

"Ironically, Nazis themselves labelled, persecuted and prosecuted their critics, just like the Swedish government does today. There is nothing progressive or liberal in persecution and repression of political opponents, civilians and terror victims. Sweden didn't even have a conservative party until spring 2018, for the last century it had different degrees of leftist liberalism", the academic pointed out.