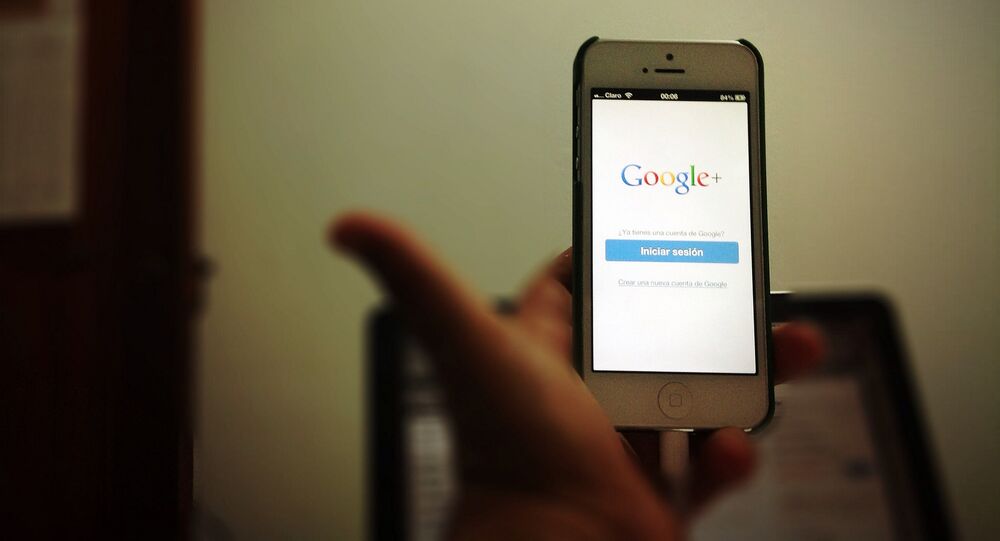 Google CEO Sundar Pichai will testify before the US Congress on 11 December. Pichai will answer questions addressing Republicans’ concerns that Google’s search algorithm and services, including YouTube, censor conservative-leaning users.

Sputnik has discussed this with Dr Binoy Kampmark, senior lecturer at the School of Global, Urban and Social Studies at the Royal Melbourne Institute of Technology.

Sputnik: In your view how much substance is there to accusations against Google about their actually having a conservative bias?

© REUTERS / Toby Melville
'Google’s Actions are Attack on Independent Political Thought' – Journalist
Dr Binoy Kampmark: The thing is it's very hard to say whether they do or not because their protocols in terms of their algorithms remain undisclosed. So, there is a suggestion, perhaps, that they might have a bias one way or the other, but this is stemmed largely, for example, from the suggestions from individuals like Paula Bolyard, for example, of PJ Media who sort of did a rather hatchet assessment on search results on the news tabs on Google, in terms of, for example, typing in Donald Trump and coming to the conclusion that because the search results showed overwhelmingly negative search results for Donald Trump that it somehow exposed Google to a bias.

But the reality of it is, of course, the nature of such algorithm searches is disposed by demand. So it depends on preferences and if people are interested in a negative story or whatever it might be, people then flock to it and just drive that particular sort of search. So it's not necessarily disposed of, per se, to bias in that sense.

Sputnik: If it is proven that there is some kind of bias or there is some certain element of the algorithms that do discriminant against conservative-leaning media or conservative thought, what do you think would actually happen? What recourse is available?

Dr Binoy Kampmark: The recourse available to those who claim conservative bias, are the recourses available to those who claim that Google, for example, as with other tech giants, for example, like Facebook, have supposedly been the purveyors of false content information. It is the attempt to try to alter search results, an attempt to make an entity like Google a policeman of sorts in terms of monitoring content.

© CC0
US Consumer Groups Urge FTC to Investigate Google’s Tracking Practices
This is of course very undesirable because it then puts the focus on these particular entities to try to adjust information content at the behest of government authorities and that's exactly what you don't want, even though Google, of course, as we already know, has its own sort of monitoring mechanism in terms of arrangements with other governments as to what it has in its search results.

READ MORE: Google Wants to Know About You So They Can Sell You as a Product — IT Expert

Sputnik: How influential could this actually be? I mean if there were some kind of a bias, is that something that's able to really shape public opinion?

Dr Binoy Kampmark: That's the big question. I've always been somewhat sceptical of the idea that this sort of information necessarily shapes opinion to the extent that it supposedly does. A lot of this is, of course, based on the angst about the way elections have been swayed.

For example, in 2016 swayed in the favour supposedly of Mr Trump and in the context of the Brexit vote swayed in favour of the Brexiteers and so on, those wanting Britain to leave the EU. But this is not either here nor there because we don't really know necessarily how the information that is put out there translates necessarily into a voting pattern or a behavioural pattern that we can make sense of. What matters here is that we are dealing with information warfare from various sides, left, right, centre, whatever.

Google tends to find itself in the middle of it because it's the transmitting mechanism there and that's the reason why we have this kind of debate.

Sputnik: And some would actually argue that many tech companies in the US, in any case, they're all sort of in Silicon Valley and that is a predominantly liberal-leaning area, I guess you could say, especially if you talk about people in IT, and some would argue that they are inherent, even if it's not deliberate, is there a difference between this deliberate manipulation of results and just inherently doing what you think, you know what I'm saying?

Dr Binoy Kampmark: I do know what you're saying, but I do actually think that in a sense it's a distinction without a difference, and what I mean by that is that it's true the Silicon Valley giants do come from a supposedly liberal background bosom, the undergrowth there is liberal and so on.

© AFP 2021 / THOMAS SAMSON
Digital Sovereignty: France Prefers 'Own Access' to Data Over Relying on Google - Pundit
But the behaviour of tech giants is distinctly not liberal. If you look at, for example, at Google's conduct, in terms of the way it's affected prices, for example, in California. Just to give one case in point, Google is distinctly unpopular in various circles, in San Francisco it is very unpopular because it's been said that Google affects the nature of the market there; for people seeking rentals, seeking accommodation and so on.

It's also supposedly cut into the economy there in a way that's unhealthy. So it's not to be taken as a necessarily liberal, progressive entity that it does advertise itself to be. The picture is more complicated.

READ MORE: Google Covers Up Sexual Misconduct by Its 'High and Mighty' — Reports

So, when we speak about a supposed liberal bias or we speak about an anti-conservative bias, we need to also see where this is coming from in terms of the way information is sourced; and the ultimate point is that Google is meant to be a go-to place for information.

That's the fundamental point that has to be remembered when we're speaking about this; and because it uses algorithmic systems the nature of the algorithm is, of course, going to be affected or will affect the nature of the demand that people go towards in terms of what they search for. In the age of Mr Donald Trump, we're dealing with search terms of a particular nature, of immense activity and interest given his polarising by way of example the bias may come through in those results.

Views and opinions expressed in the article are those of Dr Binoy Kampmark and do not necessarily reflect those of Sputnik.