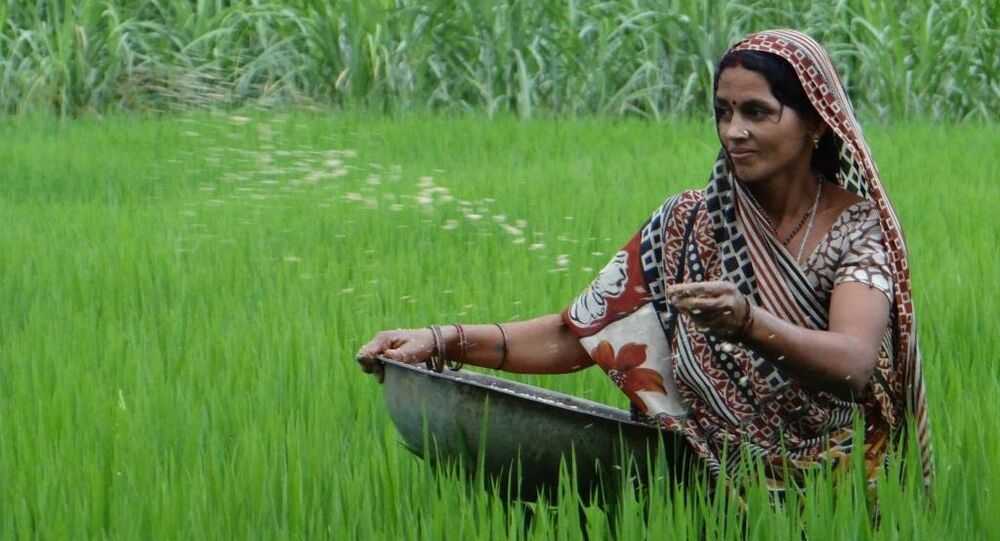 A saree is ethnic attire worn by women in India and also in some neighboring countries. This dress primarily comprises a seamless piece of cloth, about 8 meters in length that is worn in over a hundred different traditional styles across different regions of the Indian subcontinent.

The saree is an element of the cultural representation of Indian women. It's considered as a graceful garment that flatters all body types in a sensuous yet elegant manner. A sari can be a two or three piece set worn with a blouse and a petticoat (underskirt). The main drape is typically 4.5 to 8 meters in length and 2 to 4 feet in breadth. It's wrapped around the waist, just below or above the navel. In fact, there are varying cultural norms about whether or not the navel should be exposed. Some people consider it immodest to bare the navel. While others may argue that it should be left uncovered, following the belief that all life emerged from the navel of the Supreme Being.

Saree has always been a key relic of the cultural history of the Indian subcontinent. There are references of draped clothing that date back to the Indus Valley Civilization. It's believed that tailored clothing arrived here much later, with Mughal invasions. Since centuries saree has been interpreted in a variety of ways by the people of different regions and communities.

There are over a hundred different traditional drapes, though the most common style is based on the nivi style that originated in Andhra Pradesh in India. One end of the saree is tucked into the underskirt and wrapped around the waist once from right to left, the remaining length is gathered into 7 to 8 pleats and tucked in at the front, the loose end is draped over the shoulder. Within Andhra Pradesh, the saree styles vary like dialects. In one variation, pleats are passed between the legs and tucked at the back. This drape looks much like the traditional male attire called dhoti and allows more freedom for movement. Another local Andhra variation has narrow pleats at the back and a cascading drape at the front.

In pre-Independence India ‘Nivi’ style of saree came into being and was mostly endorsed Indian royal families — https://t.co/ixLcxQLZNl pic.twitter.com/CN87beEg5s

In Gujarat, the nivi style is modified slightly into seedha pallu, where the loose end, called pallu, is taken around back, brought over the right shoulder and worn straight across the front. This is the perfect way to show off the intricate design of the saree. Sarees are often designed with a particular emphasis on the artwork and adornments at the loose end. This Gujarati style is also common in Rajasthan as well as across the border, in some regions of Pakistan. Though the ethnic dress of the Pakistanis is salwar-suit many women opt to wear fancy sarees to social gatherings.

Gujarati style of wearing a saree.
Follow the steps from visiting the link: http://t.co/AFaLt5CmTo pic.twitter.com/FTIrtv9hwO

Worldwide, the Indian saree is known as its nivi drape avatar. In India, however, a lot of different styles thrive, each with its own cultural context. Some of the traditional styles are popular amongst urban women as well who typically have both western and Indian clothes in their wardrobe but love to flaunt an ethnic drape on special occasions.

Of these, the Bengali style is a favorite choice for wedding parties. It's draped with two box pleats in the front, the loose end is taken around the body and placed over the shoulder. In Bengali families, the lady of the house would often attach the house keys in a knot at the end of the pallu, with every jingle of the bunch of keys signifying her position of authority in the family.

In Maharashtra, and in parts of Goa, women wear saree like a dhoti where the drape goes between the legs and the upper part of the garment is pleated similar tonivi style. It was the lavani folk dancers of the state that introduced this style, known as nauvari or the whole nine yards, to the rest of the country and the world. This drape beautifully accentuates the movements of the dancers.

The Nauvari style of draping a saree is native to the beautiful women of Maharashtra, but there's a catch. Instead of the usual 6 yards, 9 yards of fabric are used to make this saree. #HindSadiCentre #HowToDrape #Sarees #Saadi #DrapingStyle #SaariLove #NauvariStyle #Fashion pic.twitter.com/gBhh5HNWyl

The women of Tamil Nadu also use an 8-meter long saree. It's the toughest style to drape and can be worn without a blouse or petticoat. This drape has a religious significance and is supposed to be inspired from the ardhanareeswara (androgynous) form of the Indian deities Shiva and Parvati. It used to be the dress code for married women but these days women wear it only during ceremonies and festivals.

Almost all states of India have their own unique traditional ways of draping sarees that have strong cultural significance. Kerala is known for off-white sarees with broad golden borders that are worn by local women on the occasion of Onam festival. Karnataka has numerous saree styles that are unique to the various native communities.

Wrapping a saree is different in style various States of India.See one from Kerala. #fashion #culture #silk #style pic.twitter.com/tuXJ0AdHpC

Assam is known for its three-piece saree dress called Mekhela Chador. Mekhela is wrapped around the waist like a sarong and then chador is draped and tucked over and around the upper body over a full sleeves blouse.

In neighboring Bangladesh, saree is the most common women's clothing and is draped in nivi style. Such is the importance of this attire to the culture of the region that the traditional art of weaving a Bangladeshi Jamdani saree was declared an Intangible Cultural Heritage of Humanity by UNESCO.

Enjoyed the Sari exhibit as part of the fabric of India exhibit at Cincinnati Art Museum today! Looks like America is realizing the versatility of Sari! And Fabulous Fabrics of India! MOMA has one on Saris too! pic.twitter.com/X0IOtlgCJX

In Sri Lanka, women wear sarees in nivi style or Kandyan style that is native to Kandy. The loose end of the saree is pleated and tucked into the waist in a manner similar to some of the styles prevalent in South India. In Nepal, several traditional drapes are followed. The knee length, black and red, cotton sarees worn by Newari people are especially symbolic of the culture of Kathmandu valley.

The true power of the saree is its versatility. Since ancient times this seamless piece of cloth has been utilized by different communities to suit their unique culture and community. Dancers wore drapes that accentuated their movements, those women who had to toil in hilly regions wore dhoti styles that allowed ease of movement or those who had to work in paddy fields, dressed in knee-length sarees. Sarees are made with a lot of different fabrics though handlooms are preferred and prized. Silk and cotton sarees act like canvases for traditional weaving styles and adornments. Add the modern day fusion styles to such a wide range of drapes and weaves and the reinterpretation of saree as power dressing for grace and beauty is practically limitless.

Women in Aviation: Conquering the Skies One Flight at a Time