The French government will abandon the idea of raising taxes on fuel and electricity if consultations fail to produce a good solution, PM Edouard Philippe said on Wednesday. Sputnik has discussed the prospects of the government meeting the demands of protesters with Nawar Kassomeh, a PhD, ABD in politics from Lancaster University, UK.

Sputnik: How likely is the French government to negotiate something with the protesters?

Nawar Kassomeh: For the time being, the protesters seem to be a bit naïve politically, but in the meantime, they are very determined to challenge the French political establishment. We need to wait to see how these “Yellow Vests” will define and redefine themselves in the coming days and if they will be able to give birth to a more organized and institutionalized political movement. Then and only then they can transform their will into political power.

President Macron is a symbol rather than the power holder. He was brought to this post by the real power holders to carry on their economic and political agenda. Hence, his margin of manoeuvre is very limited. Macron is in a weak position, he can neither stop the protests nor he can 'permanently' abandon his plan to raise fuel taxes. The banks and the oligarchs who brought him to power need this money.

Sputnik: What impact do these protests have on President Macron’s popularity rating? Some experts have noted that the protests have been ruining Macron’s ambitions to replace Angela Merkel as the leader of Europe. What is your take on that? 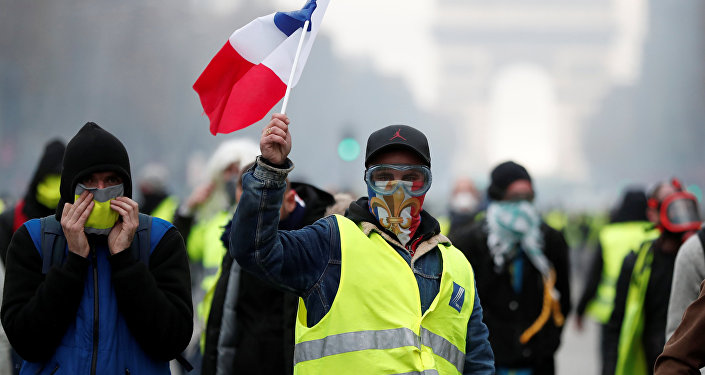 © REUTERS / Benoit Tessier
‘We Want the Whole Baguette, Not Just the Crumbs’: 'Yellow Vests' Seek More Protests Despite Paris Suspending Fuel Tax Hike
Nawar Kassomeh: We should wait to see if Mr. Macron will manage to remain in the Elysée for the rest of his mandate. His situation is so critical.
I think regardless of the impact of the protesters on Macron’s ambition. No French president can replace Mrs. Merkel as the leader of Europe not because of her charismatic power, but because Germany is Europe’s strongest and largest economy.

There is a massive support behind the ‘Yellow Vests”. According to a survey published November 28th by Odoxa-Dentsu, 84% of French support this “anti-Macron” movement. And this support includes 50% of Macron’s own sympathizers.

As a result, only 16% or less of the French people support Macron’s policy and I assume they are mainly the rich and the upper middle class who do not fear that their bank accounts are running out of money before the end of the month.

Sputnik: How the French establishment will manage the violence of the protests?

Nawar Kassomeh: The protests are popular, spontaneous, and supported by the majority of the French people regardless of their political, cultural, ethnic, religious… backgrounds.

Violence is not excusable but unfortunately, it is unavoidable in these situations. I mean when the violence is a response to another form of violence- that is, the “economic violence” committed by the state.

The French government and the mainstream media are highlighting some acts of vandalism to defame the protesters and to divide the protesters; in addition, they are trying now to infiltrate and to separate between “good” moderate Yellow Vests who are willing to negotiate with the government and the “bad” radical ones who want the president to resign or even to topple the whole French political system.

The success of the government requires that these so-called “radical” protestors are in a minority position in the Yellow Vests movement.

Sputnik:  The protesters have been demanding changes to what they call unacceptable infringements upon labor rights. How likely is the French government to give in to their demands?

Nawar Kassomeh: It is true that raising fuel taxes triggered these protests; however, there are also many reasons behind the popular anger against Macron’s economic policy.

The cost of living is increasing drastically, whereas the income remains almost intact especially for those who earn the minimum wage in France “SMIC”.

Increasing the minimum wage might not be the best solution because it would undoubtedly generate inflation and other negative economic impacts. However, I think any government should do its best to reduce the cost of living for low-income citizens especially the costs of food and shelter.

Otherwise, a government should try to avoid taxes that would target specific people with very limited income.

I think the French government will accept some of these demands. However, we cannot predict if the government’s measures will be enough to calm the angry protestors who have the potential to create a real revolution. Certainly, this scary scenario has alerted the political system and its elites. 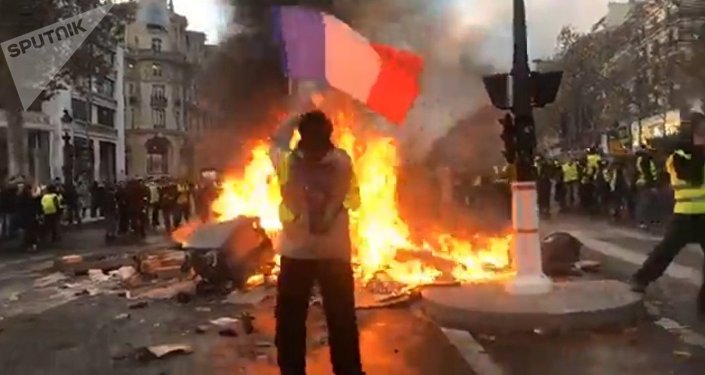 © Sputnik /
French Gov’s ‘Tone Deaf’ Response Isn’t ‘Concrete Measures’ Yellow Vests Want
It is not clear if those “Yellow Vests” members that are negotiating with the government have a real influence on the protesters. And we do not know how were they selected?

The current protests are highlighting the class struggle as well as the gap between the French proletariat and the French elites. To put it differently, these “Yellow Vests” represent the resistance of the proletariat against the domination of capitalism.

In my opinion, it is not only Macron who is in danger, in fact, the whole French political elites and system and their “Fifth Republic” are under serious threat.

In the interim, the problem is bigger than France! The whole international capitalist system is in crisis now and it is trapped in a vicious circle. The states are unceasingly squeezing the people and depriving them of their comfort and dignity not to pay the national debt but to pay its interest. In most cases, the interest rate to on the national debt exceeds the rate of economic growth; consequently, the ruling elites find themselves obliged to increase the taxes.

We saw “Yellow Vests” in Belgium and it is likely that similar protests will spread to post-Brexit Britain and elsewhere soon.