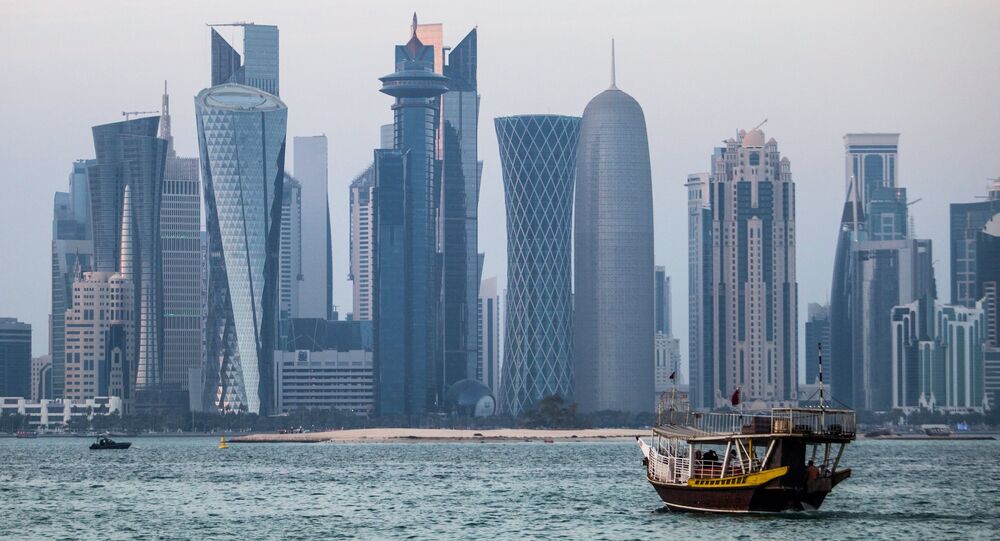 Qatar intends to withdraw from OPEC in January. This is what the country’s energy minister Sherida Kaabi said during a press conference on Monday. According to the official, OPEC was informed of this decision ahead of the announcement.

The minister also noted that his country will continue to fulfil its international commitments after withdrawal from the organisation.

Earlier, Doha announced the launch of four new LNG production lines that will allow an increase in production from 77 to 110 million tonnes by 2024.

Radio Sputnik has discussed this with Stephen Innes, head of trading for Asia/Pacific at futures brokerage Oanda in Singapore.

Sputnik: Qatar's announcement actually came just few days before a very important OPEC meeting. Why do you think the country has timed this announcement?

© CC BY-SA 4.0 / B.alotaby / Riyadh Skyline
Saudi King Invites Qatar Emir to Visit Coop Council Amid Diplomatic Row - Report
Stephen Innes: Timing is everything and I think the announcement is just dripping with irony. Talking about symbolism, this step in front of a not only an important OPEC meeting but sort of stealing a little bit of the thunder from the G20 meeting, where President Putin was there, meeting Prince Mohammed and Donald Trump on the sidelines. No doubt, there is some OPEC production cut discussions going on the sidelines. So, yes a very, very significant timing. It's quite remarkable that they came up with this one, good on them.

Sputnik: So, what do you think the impact of this is going to be?

Stephen Innes: You know, I think, it's more of a symbolic act here. As we look at Qatar, their oil production was not really that significant. We've seen the shifting alliances in oil, as far as overall price control seems to be moving away from OPEC to the multifaceted producers, the big producers in the world, such as Russia. Obviously, Saudi Arabia is still a major driving force and now also the US.

I think, when we bring the US into the equation, I think this is where a little bit of this political unrest; we're starting to see OPEC in the Middle East fray at the edges, simply because the alliance that Saudi Arabia has been developing over the years with the US, that doesn't portend too well within the economic and political landscape of the Middle East.

Sputnik: You said that you feel that this is politically motivated. This is not so much about the oil. You know, Doha has previously imposed a political and economic boycott on Saudi Arabia and three other Arab states. What can you say about the impact of this politically? Whether or not you feel, it's only a political or a technical decision as well?

© REUTERS / Reuters TV Summit Pool via REUTERS TPX IMAGES OF THE DAY
High Fives All Around: Russia, Saudi Arabia Take Control of Oil Output Ahead of OPEC Talks
Stephen Innes: You know, it goes beyond politics, obviously, with the LNG they are a major global supplier, and I think, they feel that they can do this on their own. They don't really need to be a part of OPEC, as they've got this unique wealth of the LNG, but on the political landscape I think, it's equally significant. We've seen OPEC fraying at the edges. In fact, we've even had Saudi Arabia floating trial balloons about breaking the OPEC accord also.

This may have been more motivated to ensure that Russia stays within the current OPEC+ cartel. We look at the region itself in the Middle East becoming very fractured, especially around the Iranian situation. I think this is getting back to where political and economic embargos were actually sanctioned by Saudi Arabia towards Qatar in the sense that they were accused of, you know, washing, laundering money for Iran, supplying rebels with funding. So a very contentious issue, but, you know, it always seems to boil back to Iran.

We noticed that all this instability seems to always revolve around them and especially Saudi Arabia. Those are a nemesis in the region and I think this is why we've seen this escalation.

Sputnik: What do you think the Saudi reaction is going to be to this?

Stephen Innes: You know, the balance of power now, when it comes to oil is definitely in the triumvirate of Russia, Saudis, and the US. On the supply side of the equation, what we're seeing now is the colossal producers really dictate how oil prices are getting driven. I think this creates these contentious issues with traditional OPEC producers, who feel a little bit put out by this alliance, but this is the way, it's going.

You know, it's always been this way when you think about it. When Saudi Arabia was the big supplier, they had the big clout, but now we're starting to see this clout spread out to the new guard in the production of oil.

Sputnik: So, now, Doha, of course, is not a very significant oil producer, but they are the world's biggest LNG producer. There are tensions between Saudi Arabia and other Arab states. What is this going to do? I mean, this along with their plans to really upscale their production of LNG. What's that going to do with the balances of dominance on the LNG market?

© Sputnik / Sergey Guneev
Russia Calling the Shots in Chinese Energy Market Due to Trump's Trade War
Stephen Innes: Yeah, I think, it's a real force to be reckoned with. I think we've seen deals are getting done, especially over toward China. PetroChina, for instance, where they have actually doubled their agreements over the last few months, I think this is quite significant, but when you take this all within the overall landscape of trade war; although, we've seen a little bit of the escalation over the weekend. Refined oil products that the US were big exporters into China, China cut that off very quickly last September.

It's almost dried up to a drip. So, that shows the influence that China has and what trade war can have. However, I think, Qatar has seen this little area of opportunity here because it's unlikely a trade war is gonna die down any time soon. And they are seizing this opportunity probably to make tighter alliances with China, especially when China is on this move to establish this Belt and Road Initiative" globally. So, the timing is quite critical here and I think that this is why they wanted to make the move now.

Sputnik: We've seen anyway that Saudi Arabia, Russia, and the US have really been dominating the policy-making in the oil market. Do you think that this step at all demonstrates the desire to take away from that dominance by those three leaders?

Stephen Innes: I think, in some symbolic sense it has some impact, but I think the overall economics, I don't think, it really does. I think, as what Saudi Arabia used to really control OPEC, when it was by itself and I think, what's happened, as we've seen two other colossal producers step up: Russia and the US now starting to fight for that dominance about how they decide what oil prices are going.

© AP Photo / Osama Faisal
US, Qatar Discuss Plan to Create 'Arab NATO', Expansion of Largest Gulf Airbase
Listen, it's a very complicated issue. We have Russia, who wants to continue to pump oil, obviously because of economic conditions. Prices remain quite favourable, according to President Putin, who said around $60 is quite acceptable for Russia. On the other hand, we have Saudi Arabians, who are actually trying to get some IPO issues, and they want the price driven up more towards $70-75. And then you have the big elephant in the room, which is Donald Trump who is constantly weighing on prices to go down, and this is where the intrigue is happening.

As we've seen this political landscape evolve, especially around the Khashoggi murder situation it seems like Donald Trump is having a lot more influence in the Middle East right now, and this is probably what's scaring, or what's setting off this fraying of the OPEC alliance in the Middle East. I think that this is the problem right now that the other OPEC countries are seeing US have too much influence over the price of oil.

The views expressed in this article are solely those of Stephen Innes and do not necessarily reflect the official position of Sputnik.

Qatar Intends to Leave OPEC in January to Focus on LNG, Gas Production