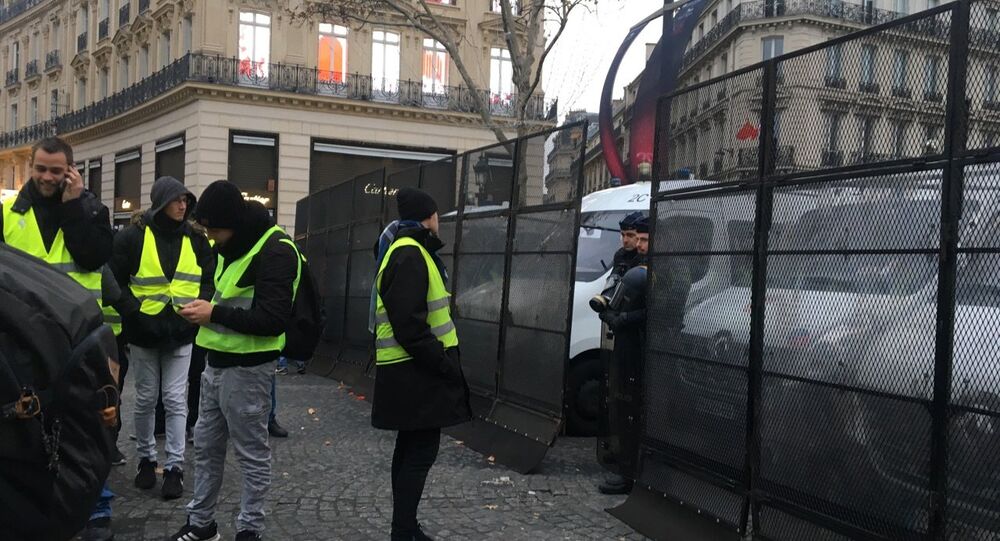 While French Prime Minister Edouard Philippe says that the government is going to “freeze the tax on diesel and gasoline for 6 months”, in Corsica, the Yellow Vests continue picketing entrances to some cities, for example, Ajaccio.

Sputnik has talked to some Corsicans, and they all say that "the island's problems are different from those on the continent". The demonstrators are blocking roundabouts to protest against the stifling tax burden.

However, there is no violence of the kind that we have seen in Paris. As one of the Yellow Vests in Bastia told Sputnik, "We came with a smile, and we will leave with a smile!"

"We've come here today because of the country's government. It is President Macron and his ministers, deputies and senators, who are responsible for the current situation. Frankly speaking, all the French people, be it the Corsicans, Parisians, Bretons, or Marseillais are in deep s**t. This may sound rude, but it's true", the protesters say.

The Corsican Yellow Vests have enumerated their demands to Sputnik. First of all, they want a freezing of excise on fuel, as they're already suffering from high prices. Secondly, they're largely underpaid; and finally, they want to reduce the tax burden on entrepreneurs, so that they can pay higher salaries to their employees.

© REUTERS / Benoit Tessier
‘We Want the Whole Baguette, Not Just the Crumbs’: 'Yellow Vests' Seek More Protests Despite Paris Suspending Fuel Tax Hike
The protesters emphasise the peaceful nature of their actions. They are working in constant cooperation with the police to get more people to sign their petition. They do enjoy popular support; and as for the opposition, talks are underway between the parties.

What do the Yellow Vests and the new E.Leclerc petrol station have in common? While in Southern Corsica oil prices range from €1.5 to 1.6, E.Leclerc sells it for €1.44.

Despite being a member of La République En Marche, which is the presidential party, Mayor of Bonifacio Jean-Charles Orsucci stresses the need to support local entrepreneurs.

He believes that it's necessary to have a combination of some revolutionary solutions to help preserve the environment and the understanding of Corsica's specific features.

"We have to remember that Corsica is an island, it's like Martinique or Reunion. Moreover, our public transport system is rather poorly developed".

READ MORE: French Authorities Will Not Impose State of Emergency Amid Protests

According to Orsucci, prices are not going to go down if Leclerc or some other local retailer sells oil; it would just stifle small family businesses that help sustain adequate living standards on the island. There are about a thousand people engaged in the fuel business on the island.

"We should develop a mechanism that allows not only to reduce fuel prices, but also to save jobs".

© REUTERS / Stefan Wermuth/Files
Tax Hacks: House of Lords Accuses HMRC of Abusing Taxpayers – Report
As for Valérie Bozzi from The Republicans, she stresses a need for transparency in the pricing system of large fuel companies.

"We haven't had any pricing analysis for gasoline in Corsica since 2012. What we want is to analyse the reasons for the ever-growing difference between fuel prices on the island and those on the mainland while Corsica has less excise taxes on petrol". Bozzi told sputnik that a special independent committee is now working on that issue.

In response to the Yellow Vests crisis, President of the Corsica AssemblyJean-Guy Talamoni held a meeting with Vito, the main distributor of fuel on the island.

"We've held a five-hour meeting, and we demand maximum transparency in the pricing system of fuels. Corsica is the only region in France that pays VAT on gas. This is unfair even though we have a reduced rate of 13%. I'm going to meet with the other two suppliers — Esso and Total by the end of the week", he wrote in a communique.