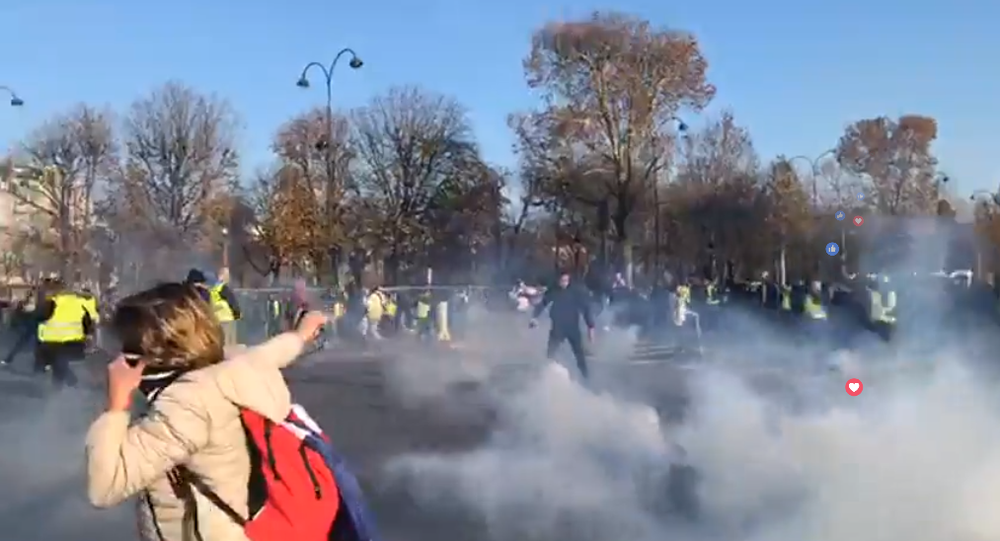 The French government has suggested holding a debate in both chambers of the parliament following protests by the Yellow Vests movement. Earlier, the leader of France's right-wing party National Rally Marine Le Pen called for the dissolution of the National Assembly amid the ongoing civil unrest.

Sputnik has discussed Marine Le Pen's calls with James Shields, professor of French politics at Warwick University in the UK.

Sputnik: What do you think about Le Pen's call to dissolve the National Assembly? Is it necessary?

James Shields: Calling for a dissolution of the assembly misses the essential point really. The National Assembly is not the main target of these protests. The main target is the president, his style, his perceived arrogance, and his reform agenda. Marine Le Pen might do better to concentrate her criticisms there on Macron himself.

© AFP 2021 / STEPHANE DE SAKUTIN
We're in New Political Age: It Will Be Difficult for Macron to Concede - Scholar
New elections to the National Assembly would not favour her party which stands to gain very few seats on the voting system, unless, it was changed to proportional representation and that's not going to happen. The election she really wants is a presidential election where she might have a strong chance again of making the runoff, but that's not due until 2022, though some of the Yellow Vest protesters are calling for Macron's resignation now.

Sputnik: So what are the chances that anybody will actually listen to Le Pen and call another vote of the National Assembly?

James Shields: There seems very little chance right now of the National Assembly being dissolved, mainly because that's not the root of the problem. It's understandable that Le Pen should call for it in a sense because she's forever hampered, she and her party, by the voting system to the National Assembly; and what she wants is to use this moment to have that voting system changed to proportional representation, but as I said, that's not going to happen.

And then unless you change the president, who drives the political agenda in France, you can't be sure of a change of policy direction through the National Assembly anyway.

Sputnik: Is anybody else calling for something similar for the National Assembly? Are there any politicians actually calling for Macron's resignation going further?

James Shields: It's the street, so to speak, that for the moment is calling for Macron's resignation. Other political leaders are calling for a range of things, a referendum being one of them, but the call for Macron to resign is restricted at the moment to those who are protesting, the Yellow vests. The problem is this, if he doesn't get a hold over this crisis soon then I think it's a short matter of time before other political leaders will be calling for his head too.

READ MORE: Macron Has Shown 'High-Level of Arrogance in His Presidency' — Political Blogger

Sputnik: Can you tell us a little bit more about where this is all coming from? Is this just about these oil prices or is it because Macron's largely viewed as a president for the rich, elitist president, other things have been said about him as well? Is there something deeper that is actually at the root of this move to protest?

James Shields: Yes, there is, indeed. This protest is in a sense the last straw. It's the spark that has lit up a whole catalogue of problems, and Macron has been slow to grasp this. He's given time for the protests to gain momentum and, crucially, for French public opinion to come out strongly in support of protesters. The problem for Macron is that this has moved so quickly from being a protest against fuel taxes to becoming a whole catalogue of social and economic grievances.

© AFP 2021 / Benoit Tessier
Macron Visits Arc de Triomphe Following Saturday Violent Paris Protests (PHOTOS, VIDEO)
In just two weeks it has become an insurrection against his regime, and that's an escalation Macron has struggled to understand. There's a blind spot there I think that plays to the accusation that this president is remote and out of touch with the French people.

Sputnik: In your assessment from 1 to 10, how well his Macron has handled this protest? Has he done anything really to avert it? And is it too late for him to do anything now, has his reputation been all together soured?

James Shields: From 1 to 10 I give him 2 for the way he's handled this protest. I give him much higher scores for the way he handled previous opposition because let's not forget that he's in his 18 months or so of the presidency and he has been moving quickly on his reform agenda. He has reformed the labour market, he has reformed the French rail network and these were sensitive areas that he reformed very skillfully.

Sputnik: Lets talk about these calls for him to resign. I don't know, do you see a situation where he would be forced to resign?

James Shields: No, it has never happened under the Constitution and no matter how much trouble presidents have got into they have not resigned in mid-term. François Hollande broke the mould recently by being the first president not to run for re-election when he was eligible to do so, but I think that points in a certain direction. Historically presidents have governed then ran for re-election and mostly won the re-election, then you get Hollande who doesn't even run again, now you get Macron 18 months into his presidency and calls for his head.

© Sputnik / Alexei Vitvitsky
Macron: Despite "Legitimate Anger", "No Retreat" Over Fuel Prices
The price of being a president in France seems to me to be getting higher and higher. That doesn't mean that Macron is not protected for the next three and a half years by the Constitution and by the whole institutional framework that he operates within. And I don't see him resigning, but if he is forced now to back off from his reform agenda he could become a lame duck president for much of the next three and a half years.

That's one of the dangers that confront him, not so much that he resigns, I don't think he will, but that he simply becomes paralysed in his ability to progress his reform agenda.

Views and opinions expressed in the article are those of James Shields and do not necessarily reflect those of Sputnik.