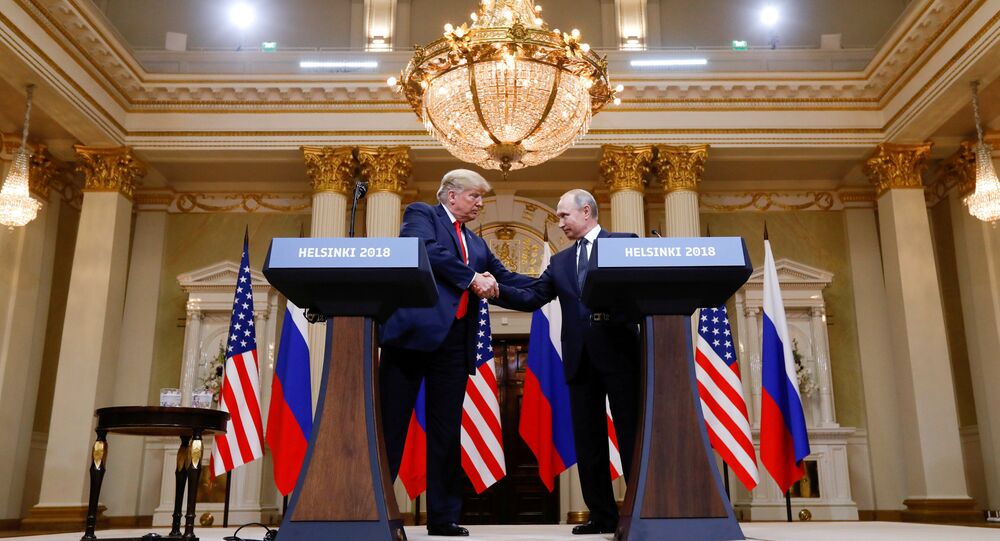 "The President [Trump] has spent decades puffing himself up as a great dealmaker and tough guy, but in fact, he's just a pushover," McAdams said on Thursday. "He's putty in neocon hands."

Trump's sudden cancellation of a planned private meeting with Putin at the G-20 Summit should not come as a surprise, McAdams explained.

"President Trump has completely surrounded himself with extreme anti-Russia neocons and they have no-doubt been plotting to get the meeting cancelled," he said. "Does anyone believe it is a coincidence that the Ukraine provocation in the Kerch Strait happened just as Trump/Putin meeting plans were being finalized?"

According to McAdams,  Russia was within its rights in responding to the Ukrainians abandoning internationally accepted norms of maritime behaviour and sending their vessels into Russian territorial waters.

"Russia defended Russian territory and the lying Western media reports it as 'Russian aggression'. How would the US react if enemy military forces approached a militarily sensitive area of US territorial waters without following agreed-upon protocol and refusing to stop when so ordered?" he stressed.

McAdams also emphasized that Trump was allowing himself to be manipulated and led by the very people he fiercely criticized during the 2016 presidential election campaign.

"President Trump is sadly proving that he has no spine whatsoever when it comes to standing up to the neocons and fulfilling his campaign promises," McAdams said. "For all his bluster, Trump is beholden to the very same ‘experts’ as his predecessors."

Trump’s failure to appoint a new generation of decision-makers had ensured that he would be trapped in the same expensive and futile policies of his predecessor, the scholar argued.

© REUTERS / Jonathan Ernst
Analysts: Trump Canceling G20 Talks With Putin Proves Ukraine’s Kerch Provocation Worked
Earlier, Trump canceled a scheduled meeting with his Russian counterpart at the G20 summit in Argentina, citing the fact Moscow had not yet returned Ukrainian ships that were seized for illegally attempting to pass through the Kerch Strait. The White House said Trump made the decision on the way to Buenos Aires after discussing the Kerch strait incident with US Secretary of State Mike Pompeo, Chief of Staff John Kelly and National Security Adviser John Bolton.

Prior to that, Andrei Klimov, the deputy chair of the Russian upper house International Affairs Committee, told Sputnik that Russian-US relations may suffer due to Trump’s decision to cancel the Buenos Aires summit with Putin.

The mentioned accident in Kerch Strait took place on Sunday, Russia seized two Ukraine gunboats and 1 tugboat sailing toward the Kerch Strait, the only entrance to the Sea of Azov, after the vessels failed to respond to lawful demands to stop, according to the Federal Security Service (FSB). The FSB also said the provocations were coordinated by two Ukrainian Security Service officers who were on the boats. In response to the situation, Ukrainian authorities introduced martial law along the border with Russia as well as the coasts of the Black Sea and the Sea of Azov for 30 days.

Trump: 'There is Long Way to Go' on China Tariffs