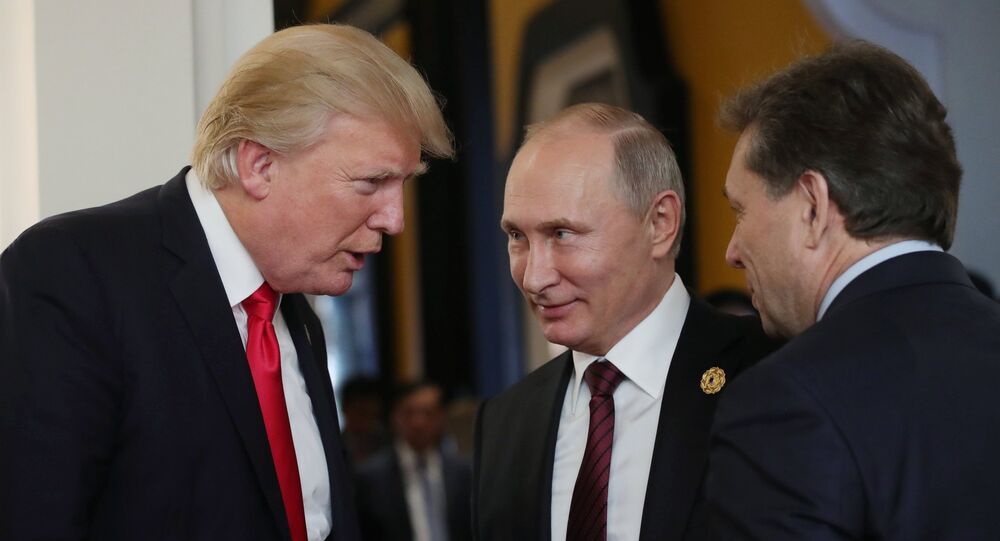 Putin-Trump Meeting May Weaken US Dollar Against Russian Ruble - Economists

MOSCOW (Sputnik) – If a meeting between Russian President Vladimir Putin and his US counterpart Donald Trump on the sidelines of the G20 summit in Argentina takes place, it will be a positive signal for the Russian currency, but is likely to weaken the US one, experts interviewed by Sputnik said.

The experts noted, however, that if the meeting does not take place, investors may be frightened by a possible new wave of sanctions on Russia, and the dollar against this background may rise in price to 69-70 rubles.

'If it is confirmed that the meeting will not take place, the ruble will fall. I think we could see 70 [rubles per dollar] before the end of the year. Maybe not straight away, but this level will be an attraction point. If there is information that the meeting will take place, then the dollar will go closer to 66.2-66.3 rubles', Vladimir Rozhankovsky, an expert from the International Financial Center, told Sputnik.

© REUTERS
Thousands Rally in Buenos Aires to Protest Upcoming G20 Summit - Reports
The meeting between presidents is scheduled for December 1, and, according to Russian presidential aide Yury Ushakov, both Moscow and Washington are equally interested in these talks.

Trump earlier in the week said in an interview with the Washington Post that he could cancel the meeting with the Russian leader because of the incident in the Kerch Strait near Crimea, during which Ukrainian ships crossed the Russian border illegally and were seized.

'News that there will be no meeting between the Russian President Vladimir Putin and US President Donald Trump is negative for the ruble', Rozhankovsky said.

The analyst explained that in this case market participants might think that a new wave of sanctions would be adopted. However, Rozhankovsky is sure that the speculations on new sanctions in the US establishment are just 'the behind-the-scenes games'.

'At first, there was information that US senators are busy, which is fair as it is really necessary to close all sorts of budget matters and other things. Everything is very difficult with China now. And then there is this stupid episode in the Kerch Strait, which they are trying to stir up to the international scale', the analyst underlined.

© Sputnik / Sergey Guneyev
Putin Preparing to Meet Trump on G20 Sidelines Despite US President's Plans to Cancel It - Kremlin
It is clear that an international group is trying to make something out of this episode as the whole incident seems to have been staged, according to Rozhankovsky.

At the same time, it is the possible strengthening of the West’s unfriendly rhetoric on Russia over the Kerch Strait incident that may really affect the price of the ruble rather than the Putin-Trump meeting, an analyst from the Finam Group, Sergei Drozdov, said.

'If there are any hints on sanctions, the dollar may rise to the level of 69-70 rubles', Drozdov noted.

No Better no Worse

Investors do not project any real decisions on the introduction of new sanctions, as well as the lifting or prolongation of existing ones, to be made at the end of the Putin-Trump meeting. Therefore there will be no significant exchange rate fluctuations.

'We should not expect any easing of sanctions in the current conditions, because the decision on sanctions is not even the prerogative of the US president, it is ‘dragged’ through the Congress', director for macroeconomic analysis at Alfa Capital Management Company, Vladimir Bragin, said.

The European Union and the United States are unlikely to aggravate the situation and promise new sanctions before the G20 summit in Argentina.

'I do not think that there will be a negative impact on the ruble in the current situation. In the context that we see now, no one is inclined to land in hot water. Probably there will be no sharp statements and rigid positions', Gazprombank’s strategy development centre chief, Yegor Susin, said.

The executive added that in any case, the ruble would have a number of negative factors in December, such as external debt payments and a large inflow of ruble liquidity into the system, which will have an impact on the exchange rate one way or another, regardless of the international political agenda.