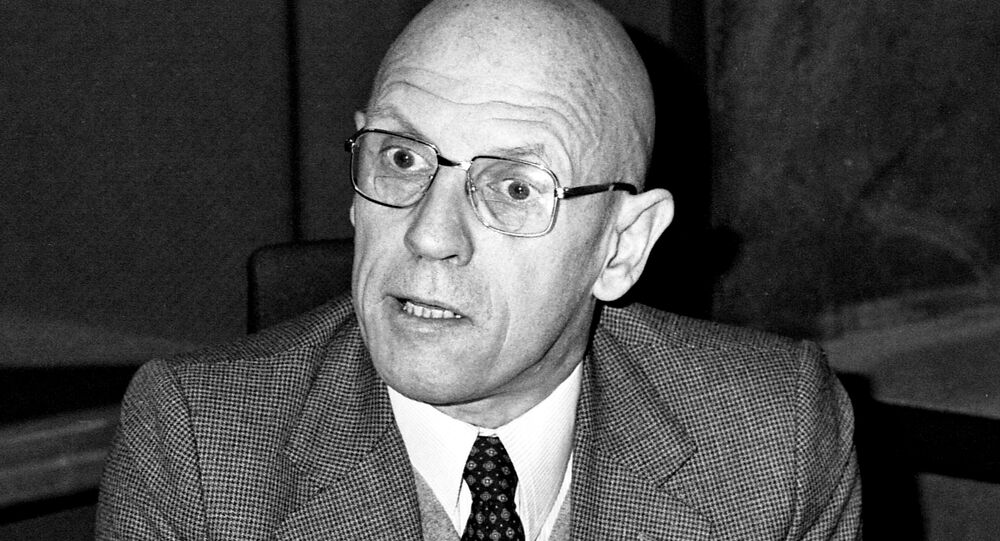 Since French post-modernist thinkers like Michel Foucault and Julia Kristeva have corrupted the social sciences, Russia has been recast as an enemy again, targeted by a new type of intellectual McCarthyism - one conjuring up and vilifying the so-called white, male, Christian patriarchy.

The bastardization of late-20th century Western social sciences (for the sake of convenience here, "West"/"Western" meaning "a free society, not under totalitarian or theocratic rule") can be largely accredited to the rise of one French philosopher, Monsieur Michel Foucault (d. 1984), equally known for his supremely eclectic intelligence as he was for his sado-masochistic bent, rapacious sexual appetite, and borderline death worship (Didier Eribon, Michel Foucault, 1991[1989], pp. 65-68). He even petitioned the French government in 1977 to abolish age of consent laws, in an attempt to legalize what he would call "non-abusive" pedophilia. Fat chance, Count Orlok.

On top of raising eyebrows with such unsavory ethics, Foucault also endured heavy criticism from his peers for selectively choosing data that fit his arguments (James Miller, The Passion of Michel Foucault, 1993, pp. 104-105), he enjoyed several stints at European universities, before landing a visiting professorship position at the University of California, Berkeley in 1980.

There he introduced his brand of French post-modernism to the already rebellious-minded, anti-establishmentarian student body. He drew large crowds to his Howison Lectures on "Truth and Subjectivity", eventually developing a massive following in the social sciences, which was already becoming increasingly entangled in human rights movements and politics, following the social upheaval of the 1960s and the malaise of purposelessness often attributed to the end of the Vietnam War and the 1970s.

Michel arrived in the US just in time to feed the intellectually hungry masses — and San Francisco was there to feed his voracious sexual appetite and obsession with pain and death. In interviews with the gay press, he praised sado-masochistic activity, describing it as "the real creation of new possibilities of pleasure, which people had no idea about previously (Eribon, 314-316).

He frequented the San Francisco homosexual bathhouses, engaged in unprotected sex, eventually contracting and succumbing to the AIDS virus. On death, Michel wrote the following (Miller, 20):

"It is in death… that the individual becomes at one with himself, escaping from the monotonous lives and their leveling effect; in the slow, half-subterranean, but already visible approach of death, the dull, common life, at last becomes an individuality…and gives it the style of its truth."

"What man encounters in his death… [is the] fulfillment of existence."

Let me get this straight: we are OK with men obsessed with death educating our impressionable, vital youth? Can a biologist or geologist get away with such perverted drivel?

His impact in the academic sphere was immense, paving the way for the French post-structuralist school's takeover of the humanities, notably by ideological figureheads such as Julia Kristeva and Judith Butler: Kristeva was a fervent Maoist and has been recently outed as a spy for Communist Bulgaria (which she denies, of course), was heavily criticized for her ethnocentric approach in her own work (e.g. Ian Almond, The New Orientalists: Postmodern Representations of Islam from Foucault to Baudrillard, 2007, p. 132), and was embarrassingly exposed for her absolutely appalling attempt at pedantry with her misuse of mathematics (Sokal & Bricmont, Intellectual Impostures,1997); Butler is a leading feminist who is perhaps best known outside her very narrow, altogether unscientific field, for winning the Philosophy and Literature ‘Bad Writing' Prize in 1999. Their students almost invariably label themselves as feminists (correctly), Marxists (nice try), post-modernists (correctly) … pick a card, any card.

For people so consumed with identity issues, they really do love their labels.

See the recent shining example of Masha Gessen, who has been recorded saying "it's a no-brainer that the institution of marriage should even exist… fighting for gay marriage involves lying about what we are going to do to marriage when we get there."

This is just the tip of the iceberg with this Gessen character. Her pal, Timothy Snyder, Yale historian, has recently been criticized by The Nation for his woeful application of post-modern tropes to global politics resulting in the demonization of nations with traditional Christian values, in this instance, Russia:

"[Snyder] is the apotheosis of a certain paranoid style that has emerged among liberals in Trump's wake… [His book] Russia > Europe > America"-the road to unfreedom is a one-way street… What happens when conspiracy theorists insist that activists are Russian dupes?"

No wonder the left hates Russia so much — they've been indoctrinated to do so by their ideologically compromised sensei.

Wait… what was that last part again? I'm a bit snowblind, all of the sudden. What's sex got to do with anything? Just imagine a neo-feminist repeating "white, straight male" like a mantra in a crescendo, with bloodshot eyes and saliva flying from "their" mouth (Is that the proper pronoun? Or should I use Zie or Xe?).

On a more serious note, however: how many different ways can one actually not say that "white, straight men are the problem" but continually imply it? Should we tack on "Christian" as well?

Edward Said, the famed cultural critic and father of post-colonial theory (which bleeds in to post-modern thought a great deal), had this very worry, as he warned how traditional sciences like geology, biology, etc., were growing to the detriment of the humanities, accusing literature departments of instilling incomprehensible writing styles and factionalist sentiments in their students, resulting even more in the diminishment of intellectual quality.

A harmless fringe theory at best initially, rooted in Freudian and Nietzschean rhetoric, post-modernism has morphed into a nihilistic, spiteful philosophy that has now given birth to violent movements, including Antifa (seemingly based at Berkeley), which routinely promotes and uses violence at its rallies (whose presence in the Charlottesville clash contributed to the tragic death of Heather Hyer, who was of course appropriately posthumously by Antifa as a rallying martyr).

Those who hold traditional values or who at least reject the social justice warrior war cries as victimhood and scapegoating propaganda are now in danger of being physically assaulted if they defend their beliefs. We can easily place the blame at the feet of university deans and department chairs for allowing the social sciences, once lauded as a place of debate and intellectual freedom, to go to hell, frankly.

In 1980, Berkeley allowed a sick, sadistic French man (who Noam Chomsky once called the most amoral man he'd ever met [Miller]) who felt at odds with the world and had an axe to grind access to our youth (I recall a young German artist in the 1920s who used his charm and way with words to harness a people's sense of purposelessness and pride to carry out a vicious plot of hatred and revenge).

Previously confined to academia, the post-modern toxic sludge has spread to the media and politics, giving birth to (yet another) new McCarthyism. It is one not attached to Cold War sentiments involving a totalitarian regime and its free, democratic enemy. This demon looks very much like a "pre-Foucaultian" US, with a culture dominated by traditional, modern values, and traditional institutions, such as heterosexual marriage, (Judeo-)Christian ethics, and a unified (generally speaking) cultural mindset. The hammer and sickle have been replaced by crosses and capitalism — yet no matter what Russia does it will continually be recast as an enemy by popular Western intellectuals, sadly. It always seems one step behind the US — let's just hope it will be spared from this period of utterly empty-headed post-modern claptrap where the Newspeak is non-binary and gender-bending is the new virtue.