UK PM Has 'Painted Herself Into a Corner': Brexit Puts May at Risk - Commentator

EU officials will meet today in order to discuss British Prime Minister Theresa May’s Brexit plan. Will they accept it, amid a backdrop of tensions with Spain over the economic future of Gibraltar?

Sputnik spoke with political commentator and media personality David Icke for more insight on the issue.

Sputnik: Do you think the EU will accept Theresa May’s deal and is there any chance it could get through parliament?

David Icke: I think to look at what’s going on; as usual you have to connect the dots and you have to look at the context in which this is all happening and then you can understand why it’s happening.

For the whole time that the EU, formerly the common market has been progressively centralised into the bureaucratic tyranny that it is now; the plan has been to centralise power, to take away power from sovereign states, and what does that mean? That means that every step towards the centre, fewer and fewer people are dictating the lives, in fine detail now of everyone else in Europe and this was the plan from the start.

© REUTERS / Jon Nazca
'Tempest in a Teapot': EU Lawmakers Say Gibraltar Brexit Issue Overrated
It was the plan from the Pan-Europa movement which was funded and promoted by the Hapsburg Dynasty back in the 1920’s, which eventually became the EU, and the idea is to absorb more and more countries and not let any go.

When they had the deep shock of the Brexit vote in Britain; it was all hands to the pump. I said within one hour on the internet, of that Brexit vote being announced, that this is just the start, because they’re not going to let this go easily.

Two things. One; they want to make sure that Britain, in terms of whatever rhetoric they use, in terms of control, does not disconnect from the control of the Brussels bureaucrats and secondly and just as crucially; it needs to show the other countries of Europe with the increasing populist support, that is sceptical about the EU, it needs to show those countries and those populations, look if you want to come out this is what happens. 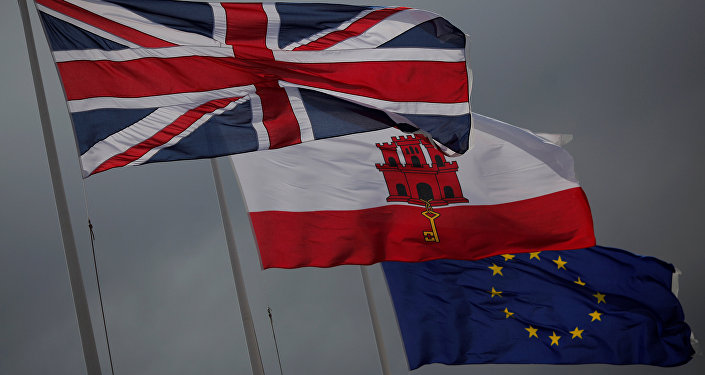 © REUTERS / Jon Nazca
Spanish PM Threatens to Cancel Sunday Brexit Summit Over Gibraltar Dispute
When you have a situation where two Brexit secretaries, who are supposed to be negotiating our withdrawal from the EU, both resign there’s something deeply wrong and deeply flawed.

What this deal has the potential of doing is basically keeping Britain in the thrall and the control of the Brussels bureaucrats ongoing, so Brexit actually doesn’t mean Brexit at all.

Sputnik: Would a no deal Brexit be a better solution than a bad deal?

David Icke: It’s going to be bumpy either way. Let’s look at the basics of negotiation; when two sides or two people negotiate, one has a walk away position, because if there’s no walk away position then you’ve given away all your cards to the other side, because they know that you’re not going to walk away.

Therefore; there’s no big downside for them. They are going to negotiate from their position of strength, because they know that you are going to have to agree to something because you’re not going to walk away.

When you look at the deficit that the UK has with the EU; in financial terms alone, the EU are going to lose out if we walk away. Major companies and corporations in Europe, who have the ear of the bureaucrats with the tens of thousands of lobbyists that are encircling the commission, would be saying hold on a minute, we’ve got massive markets in Britain, we can’t just have no deal.

What May has done, is handed all those cards away and that potential position of strength. From the moment that happened, she was in a position where the bureaucrats were in control. If it comes to a no deal now, and she’s increasingly saying if you notice that no deal is not an option, when she wasn’t saying that before, then it will be a great upheaval because of the timescale.

© REUTERS / Toby Melville
'Capitulation': Britons Don't Trust Theresa May in Brexit Deal - UK Politician
Instead of two years, we’re talking a few months now, so it’s all a mess and it’s meant to be a mess, that’s the point. It wasn’t meant to be smooth because they don’t want to send out a message to people, hey it’s actually quite straightforward to get out of our spider’s web. They’re going to make sure that people realise it’s not.

Sputnik: How long do you think she could stay in power for?

She has painted herself into such a corner and been painted into that corner, if she loses the vote she’ll have to go.

Views and opinions expressed in this article are those of David Icke and do not necessarily reflect those of Sputnik.