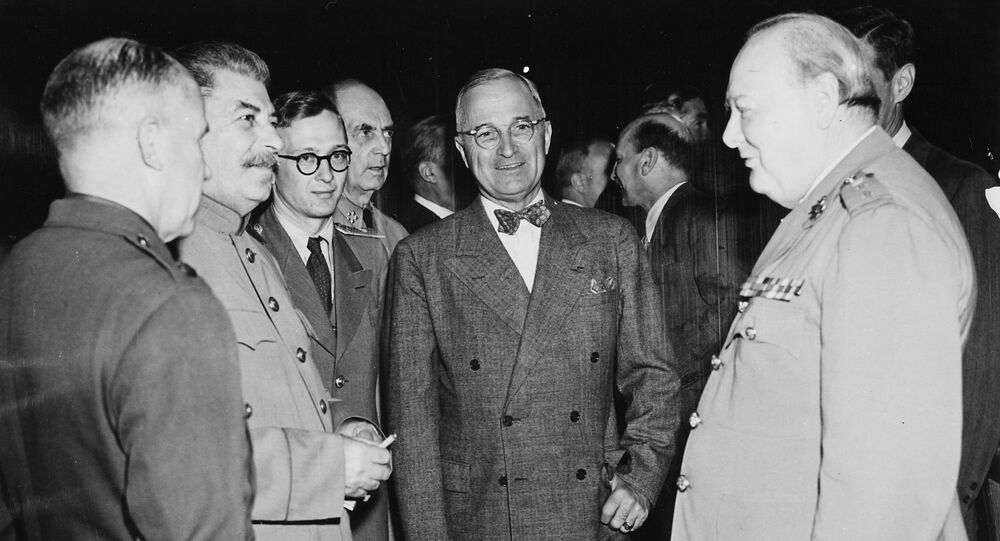 Why Truman Doctrine Has Lost Its Appeal For Isolationist President Trump

Seventy years ago US President Harry Truman announced a new doctrine, which pledged to uphold "freedom and democracy" and combat the threat of communism around the world. Sputnik looks at how the policy came about and why it is anathema to the current incumbent of the White House.

The 33rd US President, Harry S. Truman, could not have been more different from Donald Trump.

Truman, who inherited the office in 1945 when Franklin D. Roosevelt died in office, very much agreed with the maxim of another President, Theodore Roosevelt, who used to say US foreign policy should be to "speak softly and carry a big stick."

Trump's policy would appear to be more "speak loudly and carry a small twig", as can be seen by his violent rhetoric about everything from Russia, North Korea and China and his lack of disciplinary action against Saudi Arabia over the Jamal Khashoggi affair.

In 1946 a civil war broke out in Greece with the communist KKE seeking to take control of the country, which had only recently been liberated after occupation by the forces of fascist Italy and Nazi Germany.

All across eastern Europe communist regimes, backed by the Soviet Union and the Red Army, took over — in Poland, Czechoslovakia, Romania, Bulgaria, Yugoslavia and Albania.

Britain's wartime prime minister Winston Churchill had agreed in October 1944 to a deal — known as the Percentages Agreement — with Soviet leader Joseph Stalin for spheres of influence in eastern Europe and the Balkans.

So when the Germans retreated from Greece in late 1944 it was British soldiers who were sent in to keep order, rather than the Red Army.

The December Uprising in 1944 led to a confrontation between the Greek Communist Party (KKE) and British troops.

The Truman Doctrine in 5 Words: "We must keep hope alive."

On this day in history, President Truman spoke forcefully against tyranny and outlined a plan of action that became known as "The Truman Doctrine." Learn more: https://t.co/LFB7VSjv5p pic.twitter.com/3YQ2j40gZn

The KKE backed down but two years later, after the monarchy was restored and political reforms were rejected, they took to the hills and launched a full blown insurgency.

Ironically the government in Athens and the Greek National Army were dominated by conservative and pro-Nazi sympathisers, many of whom had collaborated with the German and Italian occupiers.

But despite the presence of so many collaborators the Athens regime was supported by the British because of the fear of Greece, with its strategic position in the eastern Mediterranean, falling into pro-Soviet hands.

In 1947, the Labour government of Clement Attlee, struggling to rebuild the British economy after the devastation of the Second World War, was forced to admit it could no longer afford to be the world's policeman and asked the Americans to take over in Greece, Turkey and several other countries where Soviet machinations threatened the interests of the West.

So in March 1947 Truman, a Democrat, addressed the Republican-dominated Congress in Washington, spelling out why the US needed to step up to the plate, as they say in America.

"I believe that it must be the policy of the United States to support free peoples who are resisting attempted subjugation by armed minorities or by outside pressures," Truman told Congress.

Today’s release includes 887 pages of Daily Summary reports from 1947—the year the United States unveiled its strategy for countering the expansion of communism, later known as the Truman Doctrine.

In his book on the Greek civil war, Andre Gerolymatos analysed the language.

"Such ambiguous references to "armed minorities" (communist guerrillas) and "outside pressures" (the Soviet Union) were code terms that framed the situation for Congress without explicitly antagonizing the Soviets," wrote Gerolymatos.

What was left unsaid was the importance of keeping control of the oil-producing Middle East.

Secretary of the Interior Harold Ickes said "nothing must be left undone" in securing supplies of overseas oil for the US.

1947 — Truman Doctrine: “hey we wanna help out other countries so they don’t turn communist”
2018 — Trump Doctrine: “we’re America bitch”
…and I thought Truman’s was a yikes

The Truman Doctrine was to dominate US foreign policy for more than 60 years and heavily influenced the decision to send US ground troops into Vietnam.

Ground troops were not used in Greece, apart from one occasion when Colonel Augustus Regnier, the commander of a US Army detachment, led a Greek platoon up a mountain slope to attack a communist rebel stronghold.

But US weapons and aid to the government in Athens turned the tide of the civil war.

By 1949, the KKE transformed its guerrilla bands into a conventional army, the Democratic Army of Greece (DAG) and tried to take on the US-backed Greek National Army in two set-piece battles.

The DAG was defeated and the communist threat to Greece was over, and with it the fear of a "domino effect" in Turkey and Iran, with its large reserves of oil.

Nowadays, as a result of fracking, the US is largely self-sufficient when it comes to energy, which is one reason why the Trump Doctrine is so different from that of Truman, who left the White House in January 1953 and died in 1972.

The difference in the two presidents' policies is starkly illustrated by their attitudes towards Turkey.

The US bent over backwards between 1945 and 1990 to keep the Turks "onside" — inviting them into NATO (Turkey and Greece joined on the same day in 1952) and even conniving over the invasion of Cyprus in 1974.

But in the 1990s the Soviet threat disappeared and in 2003 Recep Tayyip Erdogan's AKP took over, ousting the secular Kemalists and bringing in more Islamic policies.

History remembers the Truman Doctrine, the Reagan Doctrine and now, the Trump Doctrine — “It is what it is.”

Earlier this year Trump imposed sanctions on Turkey in a row over a US pastor, Andrew Brunson, who was accused of involvement in the failed coup in 2016.

When journalist Jamal Khashoggi was killed after being lured to a meeting at the Saudi consulate in Istanbul, Trump went out of his way to defend the Saudis despite the damning evidence produced by the Turkish government.

He even refused to listen to the audio tapes which the Turks handed over to the US to prove the involvement of the Saudi government.

It would never have happened in Truman's day.