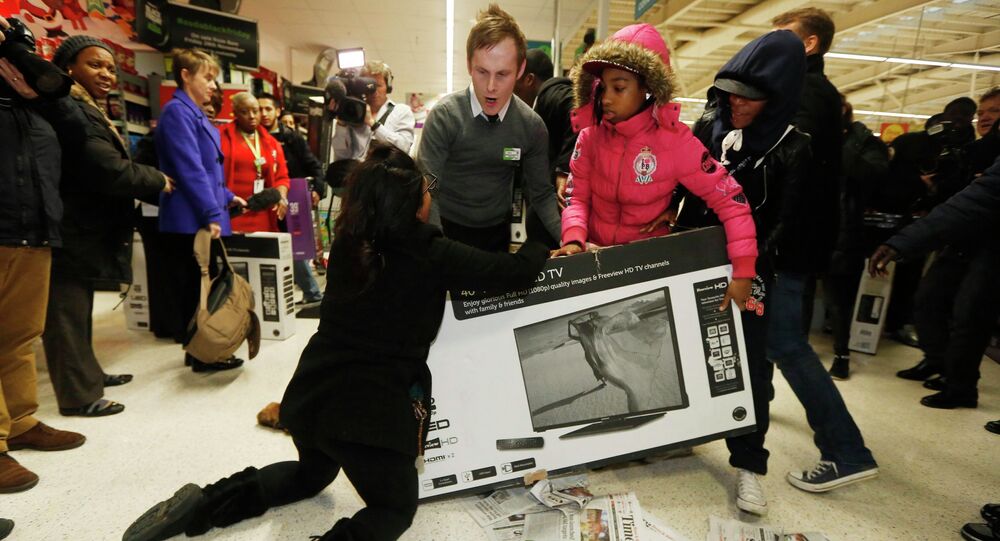 MOSCOW (Sputnik) - Black Friday on November 23 will kick off a Christmas shopping season in the United States, which makes up around 30 percent of annual retail sales.

US consumers are expected to spend 4.1 percent more than last year during the 2018 holiday season, which is an average of $1,007.24, according to the annual survey issued by the National Retail Federation (NRF) and Prosper Insights & Analytics on October 24.

People will mostly spend in three main categories during the holidays: gifts, at $637.67, non-gift holiday items including food, decorations, and greeting cards, at $215.04, and other non-gift purchases, at $154.53, the survey revealed.

"It’s the first time it has gone over $1,000. Consumers are feeling confident. Unemployment is at historical lows. Wages are creeping up, and people are willing to spend a little more," Katherine Cullen, the director of industry and consumer insights at the NRF, said as quoted by the National Real Estate Investor magazine.

According to Liz Dunn, the founder and CEO of Pro4ma Inc. business analytics platform for retailers, a healthy economy was the driving force behind higher sales forecasts.

"The consumer has a job. They’re being paid more than last year, and they’re feeling okay about prospects for the economy," Dunn was quoted as saying by the magazine.

Meanwhile, ID Analytics software company has warned of fraud risk and the possibility of an increase in fraudulent credit applications on Black Friday.

© REUTERS / Kamil Krzaczynski
US Black Friday Sales Hit Record High, So Does Household Debt
But with retailers offering Black Friday deals earlier in an attempt to lure more customers, the event has morphed into Black November.

The NRF has predicted that more than 164 million consumers in the United States planned to shop over the Thanksgiving weekend this year.

According to the NRF and Prosper Insights & Analytics survey, 21 percent, or 34 million consumers, were expected to go shopping on Thanksgiving Day. Black Friday is projected to remain the busiest day with 71 percent, or 116 million, planning to shop.

As many as 75 million planned to do online shopping on Cyber Monday, the survey showed.

The Morning Consult market research company said on November 14 that 52 percent, 58 percent of which are women, oppose stores opening for shopping on Thanksgiving Day, with the majority arguing that it should be spent with family and friends.

As argued by Cullen, US holiday sales are no longer about "online vs. in-store" shopping.

"The consumer has gotten to the point where they’re going for convenience vs. price. Mainline brick-and-mortar retailers have figured that out. All the big players have adapted their game to really be much more nimble and be able to play online, as well as in-store and meet customer demand exactly where they are," Rod Sides, the vice chairman of Deloitte's US retail and distribution practice, said as quoted by the National Real Estate Investor magazine.

According to a Morning Consult poll, released on November 16, 39 percent of men and 43 percent of women in the United States see Black Friday as "the most entertaining of the holiday shopping days."

If you go Black Friday shopping tonight, please do us all a favor and turn your phone sideways when filming any fights. Thanks.

Remember this Black Friday, if you see a fight please film it for the rest of us.

black friday is like gladiator fights for the rich. corporate america fucks us over again

​The views and opinions expressed in this article are those of the contributors and do not necessarily reflect those of Sputnik.