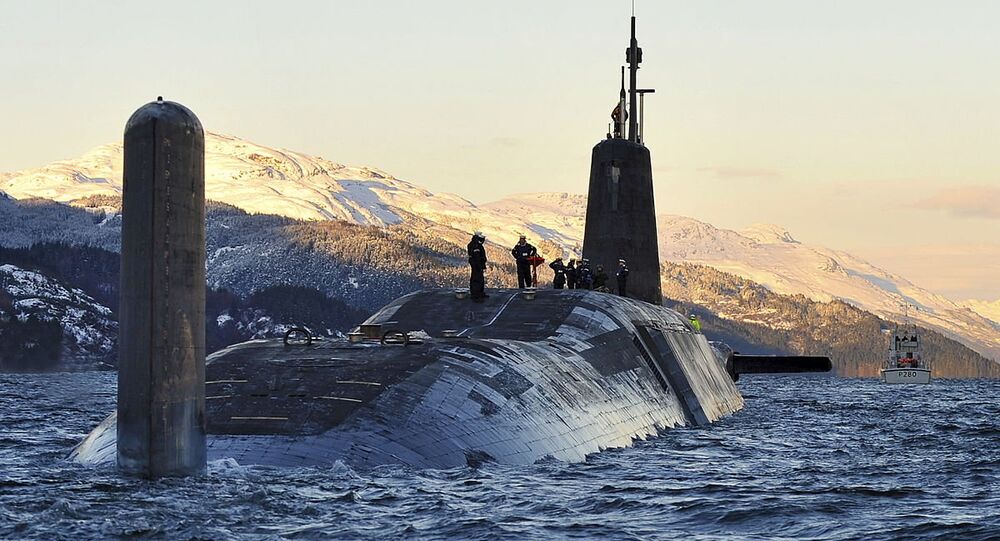 The Ministry of Defence has confirmed that there have been over 500 safety incidents at the Scottish Trident naval base since 2006. The overwhelming majority of the UK's nuclear submarines are based there.

The findings come after Downing Street was accused of trying to cover up a missile malfunction during a weapons test which saw a failure mid-flight off the coast of Florida in 2016. Sputnik has discussed this with Arthur West, chair of the Scottish Campaign for Nuclear Disarmament.

Sputnik: So how shocking are the findings of this report?

Arthur West: I mean they are deeply shocking, but depressingly they are not surprising. Over the years there have been reports of safety concerns coming from the Faslane base, this is particularly shocking but it's not surprising. It's obviously very worrying not just for people in the surrounding communities, but, you know, across Scotland and across the UK.

Sputnik: Is this shocking because you think that this differs from other statistics from other countries or other naval bases even within the UK?

Arthur West: It seems to be a particularly bad record at Faslane, that's our understanding of the situation, and then it has always been a bit difficult to get information, but during the years there has been reporting of a number of incidents; journalists have reported these incidents, there have been some members of Parliament that have managed to get information.

You know, there will be problems at all nuclear bases, but there seems to be significant issues at Faslane. And this latest report just confirms it in the most shocking of ways.

Sputnik: I mean is this really something that we should be afraid of or are these just procedural failings that were insignificant?

© AFP 2021 / Andy Buchanan
More Than 500 Safety Scares Recorded at UK's Trident Nuclear Base Since 2006
Arthur West: The potential for very lethal doses of radioactive release, particularly the category A events. But the other events are worrying as well. I mean near misses, equipment failures, these are things of real concern and it's fortunate, in a way, that the information has come out and full marks to the MP that asked the questions. Hopefully what we will get now is a bit more transparency in the future.

But, you know, I have my doubts about that, it's one of those issues that we're going to have to keep pushing on. I mean it is a shocking catalogue of incidents and very, very worrying indeed.

Sputnik: What can you say about the reporting surrounding these incidents?

Arthur West: Well, I think in your initial package, you know there was a point that was made about the MoD [Ministry of Defence], they made a decision to try to censor reports a few years ago. So the level of transparency is not particularly good. So one of the demands that Scottish CND will be making is that we now get into a situation of annual reports; we want some assurance that there will be no censoring, that there will be annual reports.

Those annual reports will be made public. There will also be discussion with the likes of local authorities and the Scottish government about the issues. You know, there has clearly been a lack of transparency. It has taken, as I say, journalists and MPs to work away at this issue over the years to get the information that we've gotten and full marks to those people who have done that.

Sputnik: Why were these incidents covered up for so many years and to what extent is that illegal under existing regulation or law?

© AP Photo
No Longer 'Master of the Seven Seas': Has the Royal Navy Ever Been This Tiny?
Arthur West: To our understanding that under existing law it is certainly very-very bad practice. And you can't hide this. You know you can't move away from the wider picture. I mean the substantial opposition in Scotland to the presence of nuclear weapons. You know, in Scotland there's substantial opposition, you know, is the majority of politicians in Scotland that are opposed to the nuclear weapons being in Scotland, public opinion as verified by many opinion polls of showing that as well. And, you know, obviously, safety feature just give one other good reason for getting rid of the nuclear weapons.

So, I think you can't separate it from the wider political picture. I mean if it is an attempt to try and lessen opposition or make people opposed to nuclear weapons to go away, I think the MoD are sadly mistaken because this kind of revelation will just build-up the opposition to the nuclear weapons being there in the first place because the best way to deal with these safety concerns is to start a programme of getting rid of the nuclear weapons.

Sputnik: What can you say about what these findings reveal about the infrastructure and the issues that might be present at that naval base? How serious are they really?

The public in Scotland, the people of Scotland that have to put up with these nuclear weapons in our country that's the very least that they deserve. But we should be moving towards to just getting rid of the nuclear weapons.

Sputnik: What does the Ministry of Defence need to do to resolve the issues surrounding the infrastructure problems? How much will is there both political and public?

© Photo : Tommy Sheridan
Over 100,000 March in Edinburgh - There is an Appetite for Indyref2
Arthur West: I think, you know the majority of Scotland's politicians both at Westminster and the ones that represent us in the Scottish Parliament, they are opposed to Trident replacement and they are in favour of getting rid of the nuclear weapons. Also opinion polls indicate that the public, very much the majority of the public, are very much opposed. But what needs to happen is: Scottish ND have done work on this. We have done work which shows that there is the political will. You know, you won't get rid of nuclear weapons overnight but there are processes whereby you can disable them and make the situation more safe.

And then you can move getting rid of them. And we have done, there has been work that has been done in that. So we would like to see a move to get rid of the nuclear weapons. We are aware and it's clear that what this report indicates is that there needs to be almost like a root and branch review of the safety regime and the base.

The views expressed in this article are solely those of Arthur West and do not necessarily reflect the official position of Sputnik.

Briton Spots a Plane 'Underwater' Off Coast of Scotland - Reports