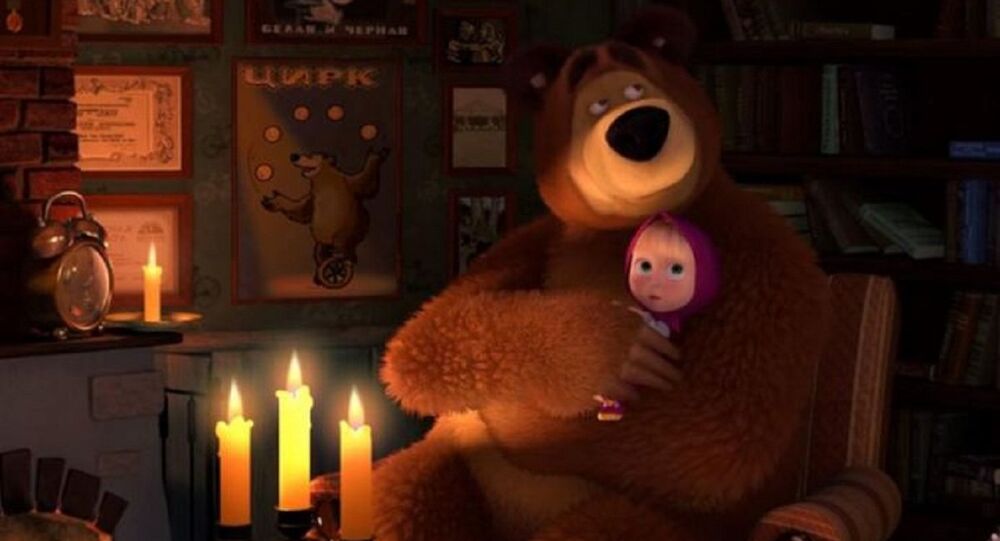 Beyond the Bounds of Reality: Cartoon 'Masha and the Bear' Kremlin Propaganda?

For children across the globe, it may just be a fun cartoon, but the hit "Masha and the Bear" has now been branded soft Kremlin propaganda, according to a recent article in a leading British newspaper, The Times.

The cartoon, which is based on the concept of Goldilocks and Three Bears – first penned by 19th century English writer Robert Southey – is centered around the escapades of a feisty and adventurous Russian girl Masha and her gentle giant friend the bear.

Produced by an independent Russian animation studio, the English language version of the cartoon now has 4.18 million subscribers on YouTube.

© AP Photo / Pavel Golovkin
British Ambassador Says UK Needs 'Long Time' to Restore Russia-UK Relations
But The Times article printed on Saturday entitled ‘Children’s show is propaganda for Putin’ cites a reference to an interview with an Estonian professor, Priit Hobemagi last year which was then printed in a Finnish newspaper, Helsingin Sanomat. In the interview Professor Hobemagi, from Tallinn University’s Communication School, claimed that in the cartoon the bear symbolised Russia and was designed to encourage Estonian children to think well of Russia.

He said the beautifully presented cartoon was part of a campaign that was dangerous to Estonian national security. The article does raise questions however as to whether The Times has gone a step too far in spreading what many see as anti-Russian content. Sputnik spoke to Dr Tara McCormack from the University of Leicester for more insight on the issue.

Sputnik: What do you make of the allegations reported in The Times of this cartoon being Russian propaganda?

Tara McCormack: I think the allegation — it's hard really to make a serious response to this allegation because it just seems so utterly ridiculous — that a children's TV cartoon which as far as I'm aware is made entirely by an independent production company and actually has quite a following worldwide — is some kind of secret Putin propaganda;

I mean we're just getting into David Icke-style territory really. I think it's such a ludicrous territory.

© CC BY 2.0 / R/DV/RS
Cold Feet: UK Broadcasters to Be Urged to Face Up to 'Russian Propaganda' - Reports
Sputnik: Professor Anthony Glees has described the feisty character, the girl in the cartoon, as Putinesque; but could it not also be argued that she has inherent 'Russian' characteristics and then are we not in danger of attacking what it is to be Russian itself?

But I mean the idea that this little girl Masha is 'putinesque' because she's feisty it's laughable really. But there is this slightly bizarre element where you end up saying well because it's made in Russia it's maybe evil Russian government propaganda, which is quite an unpleasant way of looking at things.

Sputnik: We've seen even Kremlin critics come out now and say that The Times has gone too far now. Isn't there a danger that we're now coming close to the fervour of anti-Semitism of Nazi Germany in the 1930s if we continue to view everything produced by Russia as propaganda?

© CC0
Brussels Mulls Establishing Special Fund to Tackle Fake News, Foreign Propaganda
Tara McCormack: I wouldn't go that far and anti-Semitism is being used just now in British political discourse, so that's not something I'd really want to draw parallels with. But I think certainly there is an element…it would be closer I think to some of the aspects of Cold War McCarthyism. But we're not there yet…it's a very different political and social context.

Nevertheless, we are now at the stage where we can absolutely say anything about Russia and Russians — politics aside that we would balk at saying…you know we wouldn't describe Chinese productions in this way.

So I do think there's a level of racism and xenophobia really that are being allowed now when it comes to Russia.

But I have to say The Times is leading the way in this. The Times as far as I can see has mostly abandoned news reporting. It's becomes a cross between the Soviet Pravda and a sort of David Icke monthly.

Just a couple of weeks ago there was a ridiculous report from the Henry Jackson Society — which has more or less taken over news reporting in The Times — saying that one in every two Russian expats in London is a Kremlin spy; so beyond the bounds of reality. Frankly it's an absolute shame that what was once the paper of record is now National Enquirer-style lunacy.

You know, Masha and the Bear Putin Propaganda and every other Russian in London is a Kremlin spy. The claims are absolutely wild and I think it is a measure of how ridiculous the discussion about Russia has become that this passes without an outcry.

Views and opinions expressed in this article are those of Tara McCormack and do not necessarily reflect those of Sputnik.