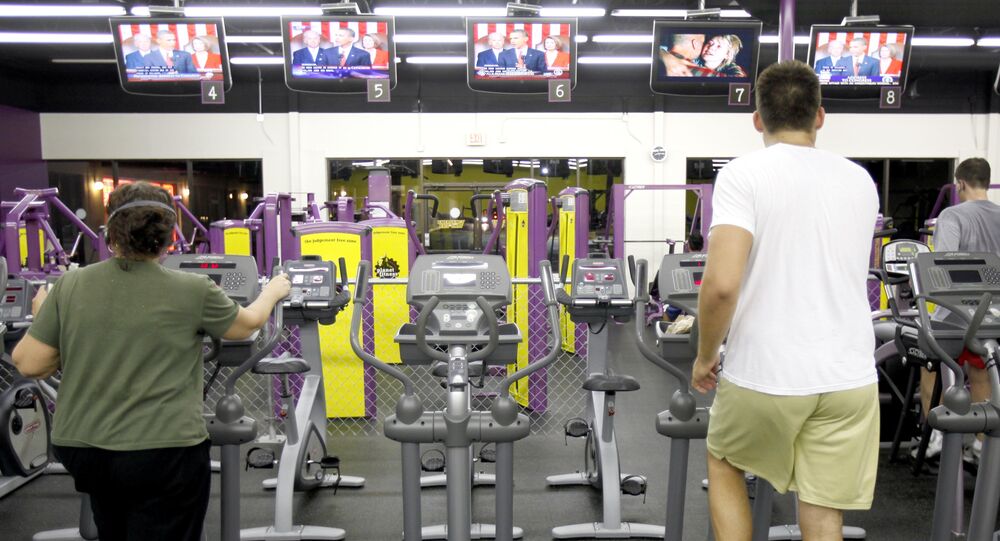 Lifting weights could be healthier for your heart than going for a run. That’s according to new research, presented at the American College of Cardiology Latin America conference this year.

After scientists examined the health records of more than 4,000 people, they concluded that weight lifting or press-ups have a greater effect on reducing the risk of developing heart disease. According to the popular assumption, cardiovascular workouts benefit the heart much greater than other activities.

YouTube/PETA
Greek Island Bans Overweight Tourists from Riding Donkeys Amid Public Outcry (VIDEO)
Sputnik has discussed the new study on heart health with Professor Maia Smith of the Department of Public Health and Preventive Medicine at St George's University who led the research.

Sputnik: Let’s ask you this question: What are the benefits of static activity over dynamic ones, when it comes to prevention of cardiovascular diseases?

Maia Smith: Yes, this finding is actually not a new one. Interventional studies have been showing for a very long time the comparable analytive resistive exercise such as weight training do have stronger effect on most of the major modifiable indicators of heart disease, such as hypertension, diabetes, overweight and poor blood cholesterol levels.

So, that in of itself is not new, however what I found is that even relatively low levels of both static and dynamic activity, such as those, we found in a random sample of Americans, were sufficient to have clinically significant differences in the levels of these risk factors.

Sputnik: How was this information learned? How did you actually go about finding out and ascertaining that actually static exercises is so much better than cardiovascular exercise?

Richard Drew
Shanghai Sperm Bank Rejects Overweight, Hair Loss Donors
Maia Smith: The data all came from this excellent dataset, collected by the US Centers of Disease Control, called NHANES, catchy acronym, I know, and they had entered the data from over 4,000 American adults, carefully selected to be representative.

So, data on static activity were how many times per week (I think, but I have to check) do you do activity, designed to strengthen your muscles? The other one was: how many times and for how long each time do you do walking, or bicycling for transportation?

Sputnik: Is there any findings with regard to your study, relating to the difference between the effects of static workout, when it comes to the dependence of age, sex, and another factors?

Maia Smith: Yeah, it was actually interesting. We did stratify by age, because, of course, age is one of the biggest predictors of heart disease and we found out that the effects were slightly stronger in young people.

That is, you would have a larger percentage benefit, if you under age of 45. However, because younger people are starting from a much lower risk already, it could be that percentage risk benefit would be almost as large, if not larger for an old person.

Sputnik: Okay, what about the intensity of the physical activities healthy for the heart. Should people work out more? I was thinking about this and thinking; maybe people in their 40s and 50s don’t really want to start to weight training. Is there any other activities, I mean, we’ve mentioned press-ups. What about the older generation is they were going to introduce this activity into their life patterns, what would you suggest them to do?

So, find a routine that works for you and stick with it, whether it’s static, or dynamic, low intensity, or high intensity, any is better than none.

Sputnik: That’s great advice. What about the people, who already have a heart disease? What exercises are more suitable for them? What can you advise those types of people?

Maia Smith: Well, actually, many of the people in my study did have heart disease. I mean, remember this was a random sample of Americans, and that’s our biggest single cause of death is heart disease.

We did exclude the ones who were so thick that they were unable to be active. So, in that case, I would say ask your doctor. Now, I suppose, is now a good time to tie this in. I recently did a similar study on the effects of strength and lung function in people with very serious congenital heart defect.

And found out that the association was the same across all the defects and only a little bit weaker than in people, who had no defect at all. And these are people with very, very serious heart problems like univentricular heart. If those guys can it, so can we.

© AP Photo / Saurabh Das
Diabetes Rather Than Terrorism May Emerge as Biggest Risk to Indians
Sputnik: Well, absolutely. I was just thinking, I am a man of 52 years of age after a lot running in my time. My knees are absolutely shot to death now. Obviously, I could probably focus on more static exercises and try to replace the running. Now, while we’re talking about running, run is said to be an efficient means of losing weight. I would say, it’s also in balance with a good health programme, in terms of food and having a settled balance diet. Given the findings of the study, should lifting weights be preferred to treadmill or cycling?

Views and opinions expressed in this article are those of Maia Smith and do not necessarily reflect those of Sputnik.