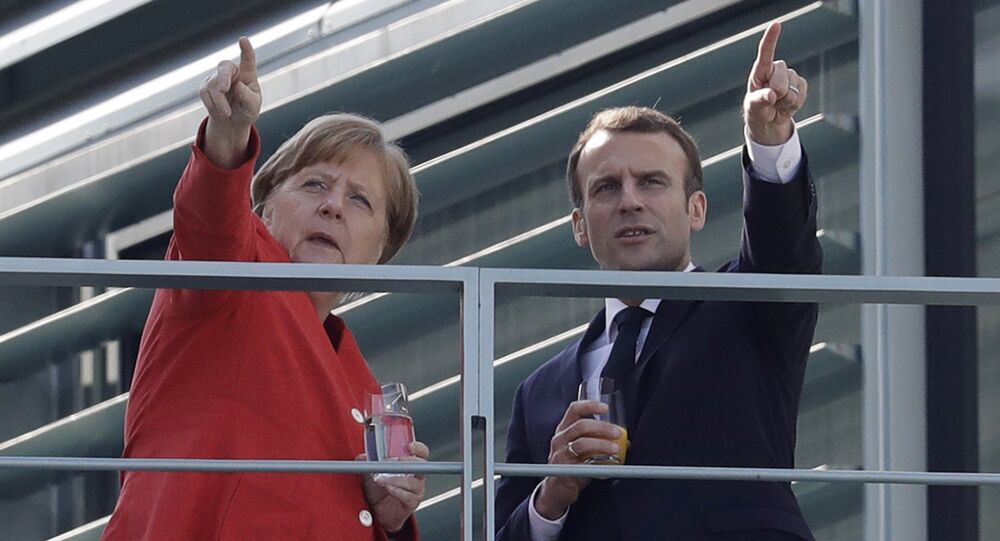 Speaking in Germany on Sunday, where he took part in national Remembrance Day for the victims of war and dictatorship, French President Emmanuel Macron said that Europe should take more responsibility for its defence. Macron and Merkel also reportedly discussed migration, the euro, taxing digital companies, and other issues.

Earlier, it was reported that Germany and France would present joint proposals on a budget for the Eurozone.

Sputnik: What's your feeling about this? What're the reasons behind Merkel and Macron's latest push for EU unity?

© CC0
Is Joint German-French Combat Jet Project on Verge of Collapse?
Fernand Kartheiser: There might be several reasons. I think the most important one is that they would like to take advantage of Brexit in order to maybe assert their leadership in Europe. With the Brits, it was never possible to go far on this, but now they would like to seize the opportunity. But by doing this, they might irritate other small and medium countries such as Italy, Spain and Poland, who might not be so much interested in seeing French-German leadership in Western Europe.

Also, you have to consider that we have European elections next May, and this new European Parliament will probably be much more Eurosceptic than the present one; so I guess that the French and the Germans, Macron and Merkel, who are both domestically weak would, perhaps, like to have some kind of integration as legacy.

Sputnik: It's very interesting and a little bit surprising. I think that previously and historically, Macron's not really favoured an EU Army, but obviously, he now looks as though he has changed his mind, perhaps because of what's happened with the Brexit strategy moving forward and without the UK being in the European Union moving forward. How beneficial is it that France and Germany come together in cooperation for the EU? What are the political and economic benefits?

Fernand Kartheiser: I think that we are all glad in Western Europe and all over the world when we see good cooperation and a good relationship between France and Germany.

But the picture is again a little bit more complex than this; the fact that France and Germany are trying to establish themselves as European leaders now means that they are constituting a non-elected leadership which might try or substitute itself to the institutions of the European Union, such as the rotating EU presidency or the high representative, who is also vice commissioner of the Commission that should be in charge of the foreign relations of the European Union.

© REUTERS / John MacDougall
Franco-German Accord Brewing to Make Apple, Facebook & Google Pay Amid US Fury
So, there's a clear competition between the French and German leadership and the European institutions.

We also have disintegration, in a way, of foreign policy in Western Europe. The French and the Germans have been discussing many times with many partners in the name of the European Union, for instance with Russia on Ukraine, but the reality is that these countries, France and Germany, are speaking more and more on behalf of themselves, and they often lack the support of everybody else in the European Union.

READ MORE: Professor On European Army: 'I Don't See the Vehicle Coming Off the Ground'

Sputnik: You've mentioned a few countries that would be opposed to that — Italy, Spain and Poland; we've also got Dutch Prime Minister Mark Rutte, who's hit back at Macron's proposal, saying it goes way too far. We've also got the Irish prime minister who's on record to say he wouldn't support something like this; on the face of it, there's quite a lot of opposition to an EU army; there's a whole host of potential challenges when you think about the difference in cultures from North European countries to Southern European countries. It is going to really work? That's one of the main cruxes against it. Will other EU states support this idea, the ones that we haven't mentioned? And if they are going to support it, why will they support it?

© AFP 2021 / PATRICK HERTZOG
German Politician: We Don't Need EU Army, We Need a 'European Home' With Russia
Fernand Kartheiser: I think that the Dutch point of view is a very reasonable one for a simple reason, because the idea of a European army is not standing by itself, it's not standing alone, but it comes together with another German and French proposal — they would like to establish a European Union Security Council.

In this security council, basically dominated by France and Germany of course, decisions on foreign policy wouldn't be taken unanimously anymore; for the time being, decisions have to be taken unanimously, that would now be different with the EU Security Council, where voting should take place by qualified majority.

Officially they say that this would allow for a faster decision-making process, but in reality, that would mean that small and medium-sized European nations would have to contribute in one way or another to an EU army without having a say on what really happens with this. That is a big danger, and that is seen by many countries in Western Europe. Basically, they don't want to contribute to such an army without having a say on how it's going to be used later.

READ MORE: Why Does EU Need an Army — France at Risk of Downgrading Its Int'l Status

Sputnik: How is this going to affect NATO and EU-US cooperation? You've had quite a few issues recently with regard to President Trump and his insistence that countries in the EU have to participate and pay their share in terms of the budget. If the likes of Germany aren't paying towards the NATO contribution, how is the EU going to be able to actually fund this? That's surely the biggest question surrounding this.

Fernand Kartheiser: There's probably a hidden agenda on this. If we look at France, for instance, they have an interest in putting the weight of their nuclear deterrence on the shoulders of everybody else in the EU, because they're saying "out nuclear deterrence is probably benefitting everybody else." And through new rules of burden sharing within the EU, it might be also beneficial for France and the Germans might get in return some say in the UNSC, for instance.

© Sputnik / Alexander Galperin
A Knife in NATO's Back or Common Sense? Russian Warships Return to Spain's Ceuta
But, of course, this puts additional strain on NATO, and the Americans rightfully so wouldn't like to see a duplication of efforts with all what they are financing in NATO. So, we are not at the end of this discussion, we're rather at the beginning. The Americans as a superpower wouldn't like to see emerging rivals, even though they are friendly to the US, such as Western Europe, it's not in their interest.

On the other hand, small and medium European nations have no interest in financing directly or indirectly the French nuclear deterrence without having a say in what is going to happen. In summary, this initiative causes a lot of difficulties to Western Europe, a lot of strain in the relations between the countries and all this comes now in addition to the other problems that we have in Western Europe.

Views and opinions expressed in the article are those of Fernand Kartheiser and do not necessarily reflect those of Sputnik.