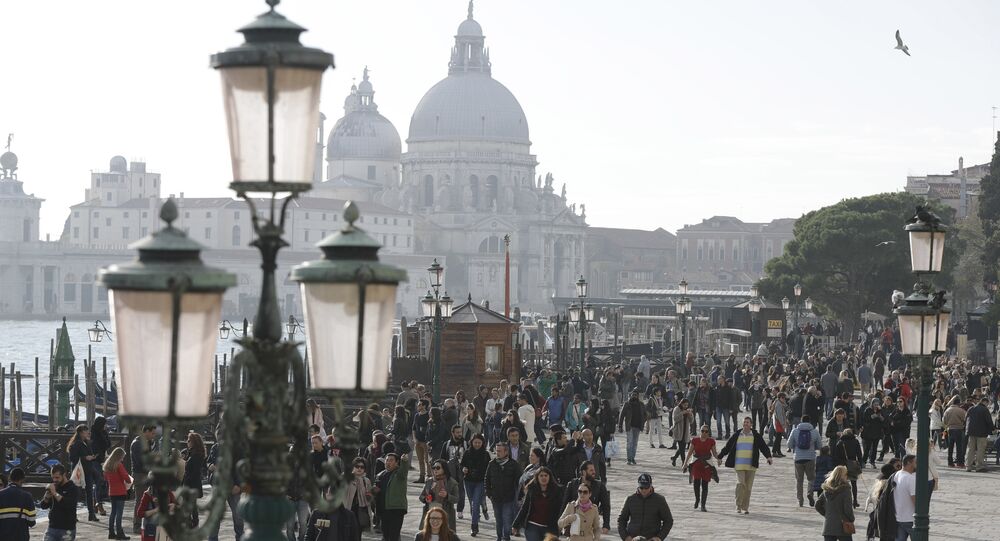 A deadline for Italy to present its new budget expired on Tuesday and the Italian government has rejected the European Commission demand to present a revised draft budget for 2019. The government said it was sticking to its big spending strategy and maintaining its deficit target of 2.4%.

Sputnik discussed this with Dr. Richard Wellings — Deputy Research Director at the Institute of Economic Affairs.

Sputnik: In your view was is Italy's government rejecting the European Commission's proposals?

Dr. Richard Wellings: Well, it's very simple the governing parties were elected on a particular agenda which included some rather modest protections __ 0.15 and some rather modest tax cuts and they're basically trying to implement the policies that they were voted in for, so the exercise of democracy, I think there's also an element, given that they are broadly уurosceptic, they're trying to stand up to the European Union and its bullying that Italy has been subjected to for a number of years now, I think that's also popular with their voter base.

Sputnik: Just explain for our listeners then how does the government in Italy benefit from insisting on its budget then?

© CC BY 2.0 / Marco Verch
Italian Government Vows to Cut State Debt Via Accelerated Privatization
Dr. Richard Wellings: Well obviously they're trying to please their voters that gave this shock result back in March but I think they're taking a bit of a risk here because, of course, if the European Commission gets its way they can end up being humiliated, as happened in Greece with Syriza and Alexis Tsipras, so he basically promised to do what the voters told him and end these huge spending cuts and tax increases and at the end he had to cut out what EU masters told him to do which was hugely humiliating both for his party and for Greece as a whole.

Sputnik: And how dangerous is the situation with Italy's debt at the moment? We're talking about 132% to GDP in terms of debt, it's a huge amount, although I was in Milan over the weekend and it didn't look as though it was a country struggling with debt and austerity but I'm sure Milan doesn't show the whole of the Italian country, how can they survive with this amount of debt do you feel?

Dr. Richard Wellings: That's right, of course, Milan is in northern Italy which for decades now has been far richer than southern Italy and parts of southern Italy are really struggling with horrendous levels of youth unemployment around 50% plus in some towns and this is potentially hugely dangerous, as you said, there's an enormous debt and the problem is a lot of this debt is held by French and German banks, so if there was to be some kind of default this could stabilize the whole Eurozone banking system and lead to the need of a massive bailout potentially, so potentially a nightmare scenario.

Sputnik: Is cutting Italy's debt payments an option for the European Commission? And if it is, we know the history with regard to the struggles and woes that the European Union has had with Greece it slowly getting back to some sort of semblance of order, it's been through a huge period of austerity and pain, is that what we're going to have to see with Italy? Is that what their population is going to have to experience?

© AP Photo / Michael Kappeler/dpa
EU Braces for Economic Turmoil as German GDP Contracts in Q3
Dr. Richard Wellings: I think it depends on whether there can be some domestic reforms for the Italian economy, if there was to be a deregulation agenda and perhaps lower taxes then you could see higher growth rates in which case it would be a lot easier for Italy to repay those debts but, of course, the economy has been basically stagnating for around 20 years now and there have been long-term structural problems, like its rapidly ageing population will put more pressure on pensions but there could be some kind of a bailout with the European stability mechanism purchasing some of the debt from the private sector but that would be hugely unpopular in the rest of Europe because it would effectively mean that all this bad debt would be piled onto Northern European taxpayers and savers, so would that be politically possible in Germany where Euroscepticism is already on the rise, I don't think so.

The views expressed in this article are solely those of Dr. Richard Wellings and do not necessarily reflect the official position of Sputnik.

'The Real Problem of Italy is Debt' - Markets Expert