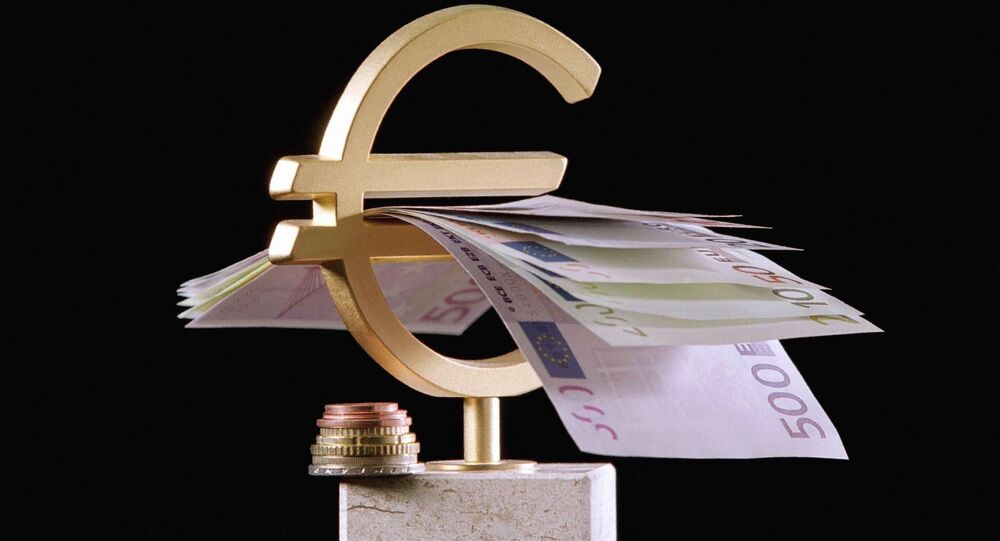 ‘Growing Uncertainty Has Been Hitting the Eurozone’ – Professor

The European Commission has stated that economic growth in the Eurozone is expected to slow down in the coming years. According to a press release, the region’s GDP has been growing at a pace of 2.1% after hitting a 10-year peak in 2017. The commission noted a high level of uncertainty surrounding the forecast and interconnected downside risks.

Sputnik has discussed this with Panicos Demetriades, Professor of Financial Economics at the University of Leicester, Former Governor of the Central Bank of Cyprus and former member of the Governing Council of the European Central Bank.

Sputnik: The European Central Bank has said that growth was stabilizing at a more sustainable pace, however, experts fear that worse is yet to come. What is your take on the matter?

© AP Photo / Andrew Harnik
US Not Seeking New 'Cold War' With China - Pompeo
Panicos Demetriades: All these exogenous factors have all been pushing in the same direction. It is the trade tensions with Trump and China; they are sort of fighting over that and the growing uncertainty that is actually hitting the Eurozone. All the uncertainty around Brexit hasn't been resolved yet but we now have Italy becoming another source of friction within the euro area and greater uncertainty. Moreover, we also have these oil prices which are exerting a dampening effect. So, growth is going to be certainly slower this year and next.

Of course, growth peaked last year, it was 2.4 percent in 2017, and everyone was sort of happy about that; but then we have all this happening — these tensions with trade with Trump and China, as well as the new Italian government creating more uncertainty. Europe is still an ongoing project — there are proposals for reforms, there are discussions; and I feel that because of that, because of the constant discussion, it's an incomplete project. And that itself creates uncertainty. And that itself actually creates political wheeling and dealing which, I fear, is really to the detriment at the end of progress in the euro area.

But that's what we have and if Europe is in trouble, then the world economy will also suffer; they are interconnected, basically.

Sputnik: The Southern European countries, like Spain; Italy has had its issues very much since the general election there. Greece is a very slow work in progress, and the economy of Cyprus isn't that huge to impact too much. Collectively, these five countries have taken a really long time to really turn the ship around; would you agree with that?

Panicos Demetriades: Yes. And, although Cyprus has turned around since 2013, one wonders whether the foundations of that growth are robust. Clearly, recently there's been a lot of bad press about Cyprus and the so-called golden passport scheme. It's not very healthy growth, even where you see the growth. Greece is still in a slow process of correcting its economy. The rest of the periphery, we have Italy, so, clearly, it's not a great picture to have. One wishes that they could get on with reforms and address their problems, but this is where we are.

Sputnik: Italy has recently said of its plans to increase the public spending in the coming years — a move that is been argued and something that the EU is heavily against; what consequences can it have on the relations between the two authorities, Rome and Brussels?

© REUTERS / Andrea Comas
'Elephant in the Room' Bond Market: Italy Not Trying to Align With EU - Scholar
Panicos Demetriades: Clearly, the Italians are asking for trouble basically, because I just can't imagine that the rest of Europe would be happy with that. You can't have two sets of rules for different sets of countries. So, unless there's some relaxation of fiscal rules for everyone, you cannot do that for Italy. Even if one is sympathetic with what they're trying to do, you really need to have to have those discussions at the European level and to have an agreement at the European level. Otherwise, it just doesn't make any sense to have EU-wide rules.

If a country that feels like "I'm big enough to ignore them"; it creates tensions, it creates uncertainty and in the end, it creates negative economic consequences for Italy itself. Their borrowing costs are now increasing very rapidly, they're almost going through the roof; they're not going back to the levels that we saw in 2012 at the peak of the crisis when there was a discussion about the euro area unraveling. If Italy's situation worsens, what we might see is people fleeing out of Italy, and not just investors but also the Italians themselves, the depositors who might begin to think "we are heading into uncharted territory here". And that's dangerous.

READ MORE: Italy Will Not Change 'Even Comma' in Draft Budget Rejected by EU — Deputy PM

Sputnik: What about a prognosis about who is going to be hit the hardest? I suppose, there's no winner out of this, whether it's Brussels or Rome if they fail to reach an agreement. There have been musings by Italy that they would come out of the EU; obviously, that's not going to happen, I mean they're threatening that. But it doesn't look good from either side, is it?

Panicos Demetriades: No, it's not good. And I think it's political posturing to some degree; it's like trying to get something out of it and then afterward to appear as if they won something. I don't think anyone wins from this. I think what Europe needs to basically ultimately address is inequality and unemployment because this is what gives rise to the populist politicians and the anti-Europe feeling.

Sputnik: The European Union the US with the protective stance and the isolationist policy of Donald Trump; what measures can the Eurozone take to decrease these risks? Is there a path they can follow or is it going to go one way?

© REUTERS / Stefano Rellandini
Italy's Flight From Eurozone Would Be Liberation, Not Punishment – Eurexit Chief
Panicos Demetriades: They can make statements about the fact that it's not good, and I think they are making those statements. Can they protect Europe from increased trade tensions? I'm not sure they can, I mean other than just saying that this is not a good idea, which they are saying. Hopefully, those trade tensions will not create trade wars between Europe and the US because that's another possibility with Trump being so erratic or unpredictable.

Views and opinions expressed in the article are those of Panicos Demetriades and do not necessarily reflect those of Sputnik.

Italy Sees 'No Chance' for Exit From EU, Eurozone Amid Budget Row