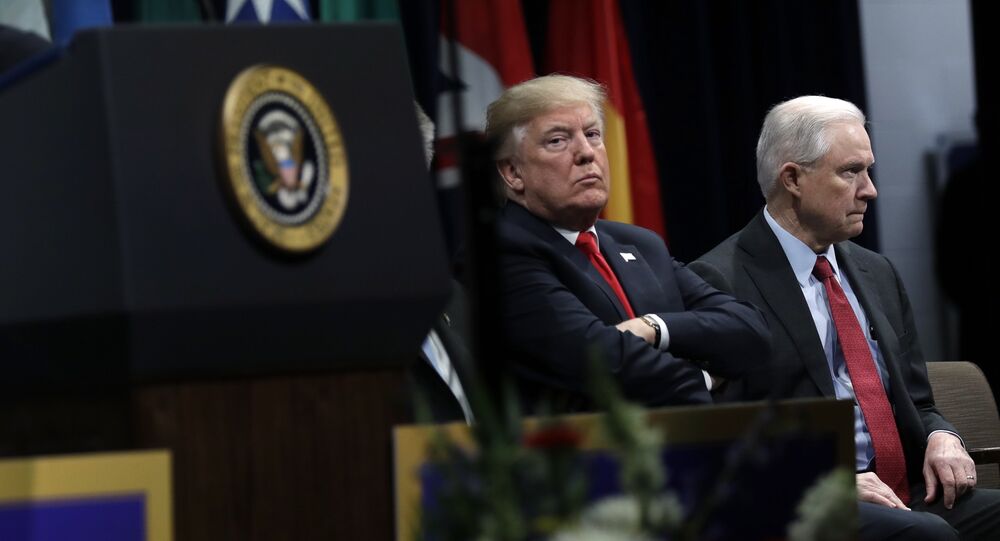 Instead of advocating chaos and protests in the streets, the Democrats, who have managed to take control of the House of Representatives, should concentrate on improving the standard of living of ordinary Americans, Wall Street analyst Charles Ortel told Sputnik, while commenting on the recent ire over Jeff Sessions' resignation.

On 7 November, Attorney General of the United States Jeff Sessions resigned at President Donald Trump's request which prompted a wave of discontent from Democrats.

Commenting on the developments in Washington, Wall Street analyst and investigative journalist Charles Ortel opined that the US president had reasonable grounds to sack the now ex-attorney general.

"From the beginning, the Justice Department under [Jeff] Sessions and [Deputy Attorney General Rod] Rosenstein, the FBI and the IRS seem to have been dragging their feet in examining a raft of potential crimes potentially committed by many in and/or connected to the Obama administration and to the Clinton family," Ortel, who has been conducting a private inquiry into the Clinton Foundation's alleged fraud for a few years, told Sputnik.

Meanwhile, it was announced that Sessions would be replaced by former US attorney Matt Whitaker, who has never been much enthusiastic about the alleged Trump-Russia "collusion" case. Whitaker is supposed to supervise Special Counsel Robert Mueller's probe.

The latest developments have prompted fears among Trump's opposition that Rod Rosenstein could be removed from the investigation.

Additionally, MoveOn, an American progressive public policy advocacy group, allegedly backed by American billionaire George Soros, called upon Americans to take to the streets on November 8, claiming that "Trump [was] putting himself above the law".

"The Russian collusion allegations have always seemed like 'gas-lighting'," Ortel said, commenting on the issue.

However, according to the Wall Street analyst, Democrats' alarmism is not so much about the potential disruption of the Trump-Russia investigation as about the Trump team's potential inquiries into the Obama administration's misdeeds.

"I believe Democrats are (correctly) terrified about looming and advancing investigations into why the Obama administration allowed the Clintons and their foundation to operate seemingly brazenly in violation of state, federal and foreign laws," Ortel stated.

© AP Photo / Alex Brandon
Dems Say Trump's Sessions Firing Threatens Mueller's Russiagate Probe
He also suspects that "Democrats fear an empowered investigation into interference in the primaries and general election that may have involved collusion of Democrats with one or more foreign powers".

The analyst highlighted that although the House may soon be controlled by Democrats, "President Trump won the right to control the entire Executive Branch, including the Justice Department".

"Democrats critical of the Sessions firing might do well to remember Eric Holder's explanation for his approach to being Barack Obama's Attorney General," Ortel said referring to then Attorney General Holder's remark that he was "still the president's wing-man".

On the other hand, Ortel continued, it's hard to forget "Loretta Lynch's tarmac meeting in Phoenix just as the FBI and Department of Justice came close to 'exonerating' Hillary Clinton for mishandling classified information over private servers and unsecure electronic devices".

"To be relevant, Democrats better concentrate on designing and passing legislation that lifts up all Americans, rather than advocating chaos, and mob rule during the next two years," the Wall Street analyst concluded.