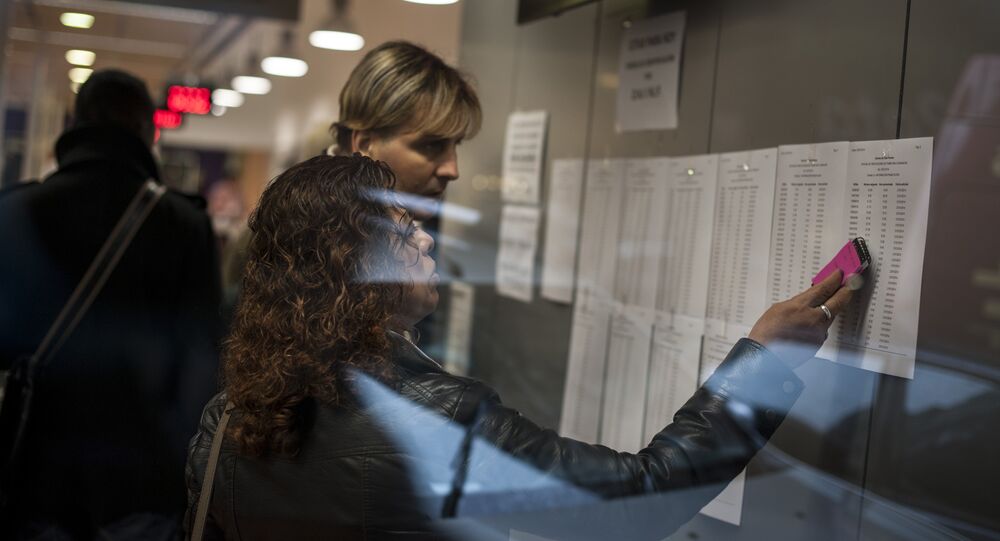 At 3.35 PM on 6 November, French women started working for free until the end of the year due to the country’s gender pay gap. No particular demonstrations were recorded on that day, yet the symbolic date brought attention once again on the issue of wage gap. What does all of this mean?

Sputnik spoke to Georgina Burrows, businesswoman, for more insight on the issue.

Sputnik: Why are women paid less than their male counterparts?

Georgina Burrows: There’s lots of different reasons for the gender pay gap. I think that, historically, there’s a big kind of consideration with the fact that women are the ones that have to have the babies, so we have to take a career break, it can be hard to get back into work, and that is a big reason for why women are paid less.

There’s also social conditioning: women are not comfortable talking about money, and historically they struggled to ask the pay rises. That’s not all the reasons, you know, I couldn’t cover that with one quick answer.

© AFP 2020 / SHAH MARAI
Burka Ban in Germany Violates Women’s Self-Determination Rights – German Muslim Council
But what I hear from a lot of women who attend my events is the difficulty of getting back into work and then knowing your value, and making sure you’re paid and valued in a way that is appropriate for you.

Sputnik: Is it safe to say that women are trying to find new ways to express their discontent? Could the mere action of raising awareness in almost a passive-aggressive fashion be the ultimate form of protest against social issues?

Georgina Burrows: Recently there has been the strike in Glasgow, with the women council workers – they took the streets in a protest, to protest for how much less they are getting paid than men.

So, the female-dominated cleaning roles were getting paid less than the male-dominated rubbish collection, even though they are categorised in the same kind of area. I think it’s not a new thing, there’s also a lot of online activism these days, because it’s easy to make your voice heard through social media and reach a wider audience.

© REUTERS / Kacper Pempel
Millions Mourn the Loss of Women's Rights in Poland
But I think there’s still a place for street activism as well, definitely. It’s important to raise awareness. I think the fact that French women working for free now for the rest of the year is more of an awareness thing, I guess. It takes a lot of organisation and it needs a leader to do any kind of actual striking and protesting.

So a part from that, it’s just something that hasn’t been organised yet. I think it’s definitely not a bad thing to be raising awareness though, because a lot of people perhaps might not even be aware of the gender pay gap and how it changes between different countries.

Sputnik: It can be argued that for some women the idea of being paid less than men is not a problem. So, if some of them are complicit of the system, how could women expect to change things?

Part of the reason why I run events for women given a platform to inspire other women is to raise awareness around better ways to talk about money, and know your value and inspire other people, because you can’t be what you can’t see. I don’t think anyone should accept getting paid less than a male counterpart for any reason.

If they do the same job, I can’t see a reason as to why you do accept that; and if you found out that that was the case, then I would definitely have a conversation with my boss. And I think as well it’s not just necessarily for women to do something about it, it’s men as well, you know? If you’re a boss and you’re employing men and women, you should be taking steps to make sure your company is employing them on the same basis with the same terms and the same pay.

© AP Photo / Schalk van Zuydam
#SlutWalk: 30,000 March Through Iceland Capital for Women's Rights
And equally, if you’re a man and you work with women and you’re aware you’re being paid more than them, then you should be standing up and helping to ensure that everybody gets equal pay. It’s not just down to women to raise awareness and campaign about it, it’s down to men, because we should work together.

Sputnik: How long will it take to balance the disparity between men and women?

I think realistically it’s more likely to be our grandchildren.

Views and opinions expressed in this article are those of Georgina Burrows and do not necessarily reflect those of Sputnik.