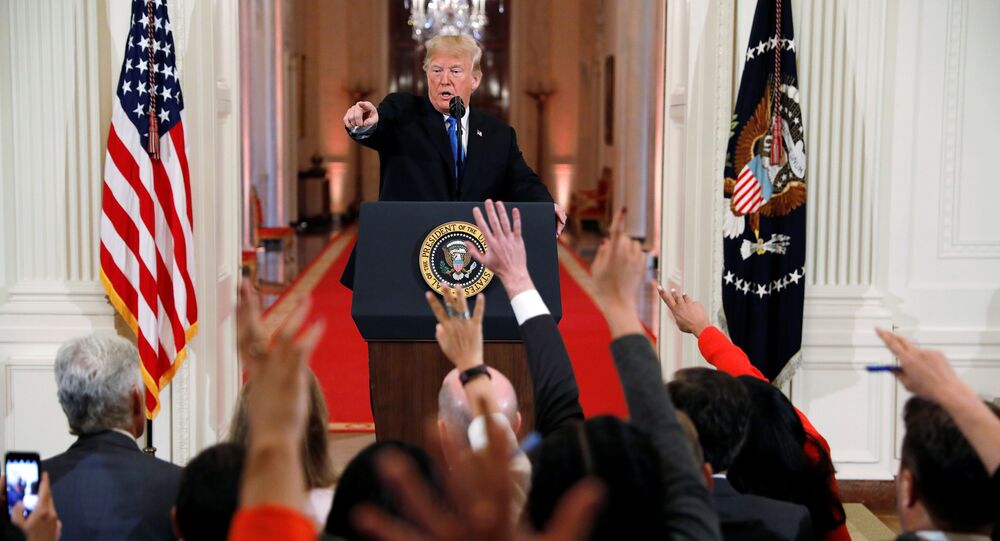 US President Donald Trump was quick to declare victory Tuesday night, even as his Republican Party lost control over the House of Representatives and large numbers of state and local races remain in contestation. However, GOP control over the Senate was solidified, a keystone of conservative political strategy. So did Trump really win?

© REUTERS / Leah Millis
Trump Not Ruling Out Gov't Shutdown Over Wall Funding at Post-Election Presser
Democrats promised a "blue wave" of liberal political victories in 2018, a staunch rejection of Trump and his party's policies. But as election results rolled in Tuesday night, Trump tweeted: "Tremendous success tonight. Thank you to all!" The previous election, in 2016, ushered in Republican control over both the legislative and executive branches, meaning they held majorities in both houses of Congress and won the presidency, in the form of Trump himself. However, Tuesday that monopoly was lost, yet Trump declared the day a success. How could this be so?

Radio Sputnik's Loud and Clear spoke with Jacqueline Luqman, co-editor-in-chief of Luqman Nation, about what the two major political parties might do with Tuesday's results and whether or not that would help or hurt the president and his agenda.

https://www.spreaker.com/user/radiosputnik/dissecting-the-midterm-election-results-
With a Democratic majority of 223 seats formed once more in the House, Nancy Pelosi, a Democratic representative from California, stands to once again be elected by her party as the Speaker of the House, placing her third in line of succession, should both the president and vice president become unable to perform their duties. Pelosi's party campaigned hard against Trump, forming a "Resistance" that only barely shied away from openly calling Trump a fascist (although many grassroots #Resisters did not shy away from that) and placed front and center the allegation that Trump's campaign had, either as willing partner or unwilling puppet, been aided by the Russian government in achieving its 2016 victory.
© AP Photo / Alex Brandon
Dems Say Trump's Sessions Firing Threatens Mueller's Russiagate Probe

Despite this, Tuesday night, after winning her own reelection and verifying her party's control over the House, Pelosi indicated her willingness to reach across the aisle, promising she "will work for solutions that bring us together, because we have all had enough of division."

"I think I'm the best person to go forward, to unify, to negotiate," she said. Trump, in turn, backed her bid for House Speaker.

In the Senate, Republicans solidified their majority. As of Wednesday night, they only had 51 seats verified in the 100-person chamber, but two senators are Independents, and the Mississippi election will require a second-round runoff, since no candidate won a majority, the New York Times reported.

© AP Photo / Dmitri Lovetsky
‘The Dirt’s Not There’: Dems Have Nothing to Show For Midterm Russiagate Hysteria

As the upper legislative chamber, the Senate is tasked with judicial oversight, verifying appointees to judges' seats, including the US Supreme Court, as well as overseeing treaties with foreign powers and the diplomats who negotiate them, meaning, as Luqman pointed out, the Republicans can exercise effective control over the political makeup of the country's judiciary for "a generation and a half" — long a part of conservative political strategy.

Luqman said the Democrats in the House would use their new-found majority to forward their long-desired investigation of the president. Not on alleged Russian collusion, though. Luqman predicted the Democrats would "abandon the Russia narrative because that's been dragged out for so long, and that's turned up pretty much big ‘goose eggs,' so I think they have enough egg on their face for that." Instead, she suggested they would push for his tax returns and dig into the Trump family's financial dealings.

Luqman said she thought the election was a victory for the Republicans, noting that the Democrats and Trump agreed on one major thing: the midterms would be about Trump. However, Luqman argued that this didn't turn out to be the case. "This was not the great referendum against Donald Trump that the Democrats said it was going to be," she said, noting that the "blue wave" simply didn't materialize, especially in state and local races that had little to do with the president and where having an R next to your name doesn't automatically equate you with Trump.

John Kiriakou, who co-hosts the show with Brian Becker, concurred with Luqman, noting that one important arena had not yet been totally decided: state legislative elections had not yet fully been counted. This is extremely important because following the upcoming 2020 census, congressional districts will be redrawn by the state legislatures, leaving the opportunity open for gerrymandering, the unfair crafting of district borders to favor one party over another.