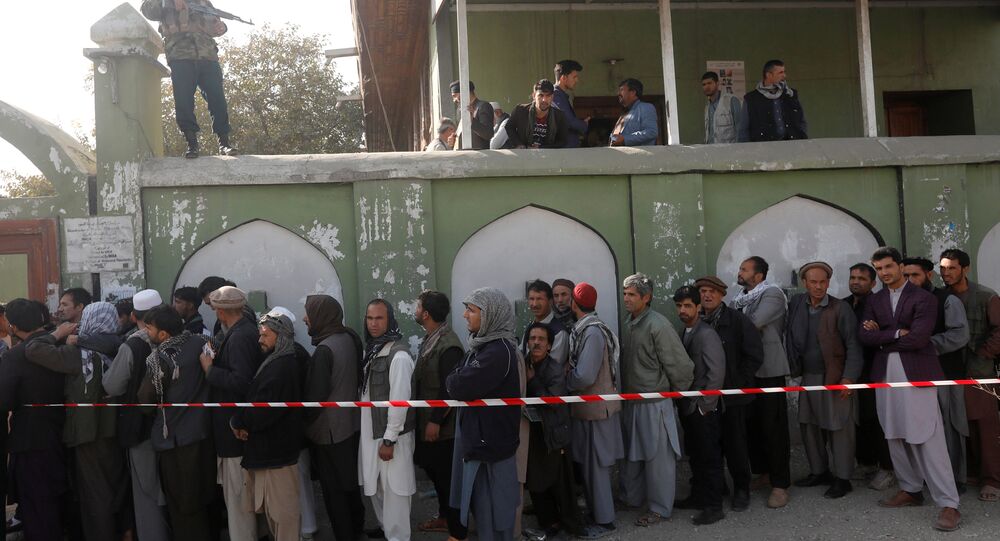 Hundreds of Afghan civilians were subjected to record-setting violence during the nation’s recent parliamentary vote. Despite the 17-year US military presence in the country, the situation is “worse than ever,” according to a US Army military strategist who spoke to Sputnik in an unofficial capacity Tuesday.

US Army Major Danny Sjursen joined Radio Sputnik's Fault Lines on Tuesday to discuss the situation in Afghanistan. Sjursen is a former history instructor at West Point and has served on combat tours in Iraq and Afghanistan with reconnaissance units. His latest book is "Ghost Riders of Baghdad: Soldiers, Civilians, and the Myth of the Surge."

On Tuesday, the United Nations reported that 435 casualties were sustained by Afghans on October 20 and over the following few days, making it the bloodiest election season ever for the war-torn country. Fifty-six people were killed and 339 wounded; election officials, politicians and voters alike were all targeted in the attacks.

Disclaimer: The following statements were made in an unofficial capacity and do not reflect the views of the Department of Defense or the US government.

Radio Sputnik's Fault Lines: It seems like things are getting worse after 17 years. Is that analysis crazy?

US Army Maj. Sjursen: Things are worse than ever. The bottom line is that the War in Afghanistan is all but lost; we just haven't accepted it yet. The Taliban contests a more significant portion of Afghanistan than ever before. One of the reasons there was so much violence in this election is that something like 44 percent of all Afghan districts are under the control of the Taliban, or are being contested actively by the Taliban. So, that'd be as if there was a civil war going on in the United States today, and you had to find your way to the polls through the middle of opposing mines in a war. That's what it's like, at this point, in Afghanistan. The notion of having a free and fair election is in some way a farce because of the contested nature of these provinces.

Fault Lines: On November 9, there's going to be peace talks in Russia. The US is not involved. The Afghan government is sending representatives, and the Taliban is sending representatives. What do you think about that? We're there; we haven't been able to move anything. These other people are going to Russia. I don't think it looks good for the United States. What are your thoughts on that dynamic?

Sjursen: It's indicative of how the United States is often a pariah nation. Oftentimes on the international scene, we're the ones that don't play ball, we're the ones who don't follow the international norms and policies that we supposedly put in place after the Second World War. Look: I think the negotiations are essentially a good thing. There will be no military solution to the War in Afghanistan. The US Army cannot win that war; I don't think the Afghan government can win that war outright. What we're going to have is a stalemate.

This is going to end in some sort of Afghan political compromise. It's going to be messy. It's not going to look like a democracy in the Hindu Kush Mountains like we wanted it to be. But in the end, this is going to be an Afghan solution to Afghan problems.

© AP Photo / Allauddin Khan
‘This Is Not Intended to Be Won’: US Army Security Brigade to Deploy to Afghanistan as 17-Year War Drags On

The fact that Russia is brokering it only shows how intransigent the Americans are, because we have been mostly unwilling or unable to deal with the Taliban, to realize that the Taliban is going to be a factor politically in Afghanistan — whether we like it or not — once we leave. They are highly popular in the south and east of the country.

Fault Lines: Is it correct that former US National Security Adviser H.R. McMaster kept the US in Afghanistan?

Sjursen: Well, I only know the insider accounts that I've read; I don't want to speak for General McMaster since I'm not positive of his exact role, except for what I've read in the Woodward book ["Fear: Trump in the White House"]. It appears that people in the political mainstream, like McMaster, like General [and Defense Secretary James] Mattis — it appears a lot of those individuals had more conventional views of the War in Afghanistan than Trump did. Because Trump's initial instinct was to leave. He admitted that. He said it during the election [season]. I think he had sound instincts — believe it or not — on Afghanistan, and I say that as not a particular supporter of the president or anything.

But I do think the people in his national security circles, including H.R. McMaster, were very much tied to the status quo. And the ‘status quo' was the Forever War in Afghanistan. A few more troops, a few more billion dollars, a few more advisers, and we can make this thing happen. These guys have spent their entire adult lives — the second half of their entire adult lives — trying to win this fight and banging their head against the wall over and over.

Instead of learning the lesson that maybe we shouldn't do it all, their thought is: ‘No, we have to try harder because we've already sacrificed so much.'

So people talk about a ‘deep state.' I don't know if I would like to use that term. But there is a foreign policy mainstream that has a degree of strategic inertia, that I would argue is very, very devastating to American policy in Afghanistan.

Listen to the rest of Major Sjursen's interview with Fault Lines on Radio Sputnik. The interview segment begins at 93:55.