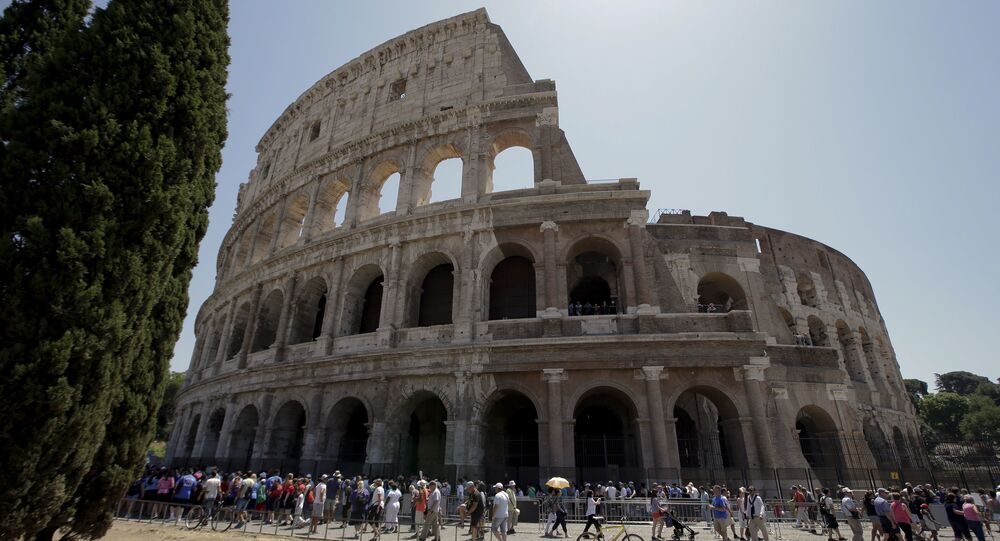 Better opportunities for Italy will open up once the European Union is transformed or dissolved, Maurizio Blondet, a prominent Italian journalist and author who has worked for the Il Giornale, l'Avvenire and La Padania newspapers, told Sputnik, dubbing the bloc a "prison of peoples."

According to Maurizio Blondet, the European bureaucracy remains a stumbling block in the way of further rapprochement between Moscow and Rome, who have maintained a "privileged relationship" for decades.

During the Italian-Russian high-level summit that took place on October 24, Prime Minister of the Italian Republic Giuseppe Conte, who took office on June 1, 2018, told Russian President Vladimir Putin: "I would like you to visit Italy as soon as possible. You have not been there for too long. I do not want the Italian people to get the impression that you do not pay enough attention to them."

Commenting on this remark, Blondet opined that "Conte has expressed here the sympathy that the Italian people in general have for Vladimir Putin and his political action of opposition to globalism."

Rome Has Always Had Cordial Relations With Moscow

"Rome is trying to resume its traditional policy towards Moscow, a policy that dates back to the times when Moscow was the capital of the Soviet Union. Even then, despite the Cold War, NATO membership, the Euro-missiles and the American bases at home, the Italian governments had a special relationship with, and a political sympathy for the USSR," the journalist elaborated.

© REUTERS / Tony Gentile
How Eurosceptics Won the Day in Italy and Outplayed George Soros
He recalled that "Italian Christian Democrats and center-left governments always had cordial and economically fruitful relations with the USSR." To illustrate his point the author referred to the history of the Russian city of Togliatti (Tolyatti), an automobile center of the country.

"Togliatti is the city of cars based on an idea of ​​Fiat that was named after the head of the Italian Communist Party Palmiro Togliatti. I myself, at that time proudly anti-communist, have always looked with favor at these good relations," Blondet said.

He noted that "suspicious Americans" dub such policy as "sailing in two boats." However, Italian politics have never been fully identified with the West, creating enemies in cases when it is more civil to shake hands and understand the "adversary's" motivation, the author highlighted.

"And how can one even consider Russia an enemy? A country whose writers — from Tolstoy to Dostoevski, from Bulgakov to Solzhenitsyn — have a lot to teach Europe," Blondet asked rhetorically.

In 2007 Blondet wrote a book entitled "Stare con Putin" ("Stay with Putin"). The author argued that the process of integration between Europe and Russia was in some sense predestined and completely corresponded to their national interests. He insisted that "Russia and Europe can't help integrating increasingly — it's a kind of manifest destiny."

"I hold the same opinion: This is a historical assessment, which does not depend on the form of government here and there. Russia 'is' Europe. Its integration enriches economies that are complementary with each other. And it enriches cultures too. We have things to teach and things to do learn — and there is no need to be enemies," he said.

© AP Photo / Jens Meyer
It Takes Guts: Nord Stream 2 Dilemma and Italy's Chance to Stop Russia Sanctions
The question then arises as to whether one could expect that Rome and Moscow will establish closer ties under the Conte cabinet despite EU sanctions promoted by Brussels.

It will be very difficult, according to the Italian journalist.

"All Italy can do is to oppose sanctions at a European level — but Italy today is fast becoming a pariah state within the EU, hated and despised by Brussels and Berlin alike — hence, not much listened to," Blondet explained. "Better possibilities may open up only if we manage to change (or destroy) this 'prison of peoples' called the EU. Then there is the US. Conte needs Donald Trump's support in this real war that the EU has launched against Italy. Also for this reason Conte's cabinet can only go so far in opposing anti-Russian sanctions."

US Throwing Wrench in Russian-European Works

Likewise, Blondet remains pessimistic about the prospects of Russian-European relations due to substantial Washington's influence on the EU.

© REUTERS / Tyrone Siu
How Russia's Greater Eurasia Plan May Spell the End of EU-Centric Model
According to the author, the US entered the Second World War in 1940 to prevent a potential Russo-German rapprochement. Citing American geostrategist Zbigniew Brzezinski, he pointed out that Washington had always regarded it necessary to drive a wedge between Europe and Russia.

"Today, [John] Bolton is certainly not more humane," the journalist remarked. "A strong part of the American deep state wants a war against Russia. They reckon they are able to defeat and humiliate Russia the way they did with Japan and Germany."

As for Brussels, "it does not have a geopolitical theory; it has mental confusion," Blondet noted. "It depends on the US and tries to sneak away when business is at stake (for example Nord Stream). Brussels simply has to be eliminated."

Maurizio Blondet is a well-known Italian Catholic journalist. He has worked for Il Giornale, l'Avvenire and La Padania newspapers. He wrote for La Padania, the official newspaper of the political party Lega Nord, directed the on-line news site Effedieffe and writes for his own blog MaurizioBlondet.it.

Sex Abuse Scandal in the Catholic Church: The Untold Story of Cover-Up