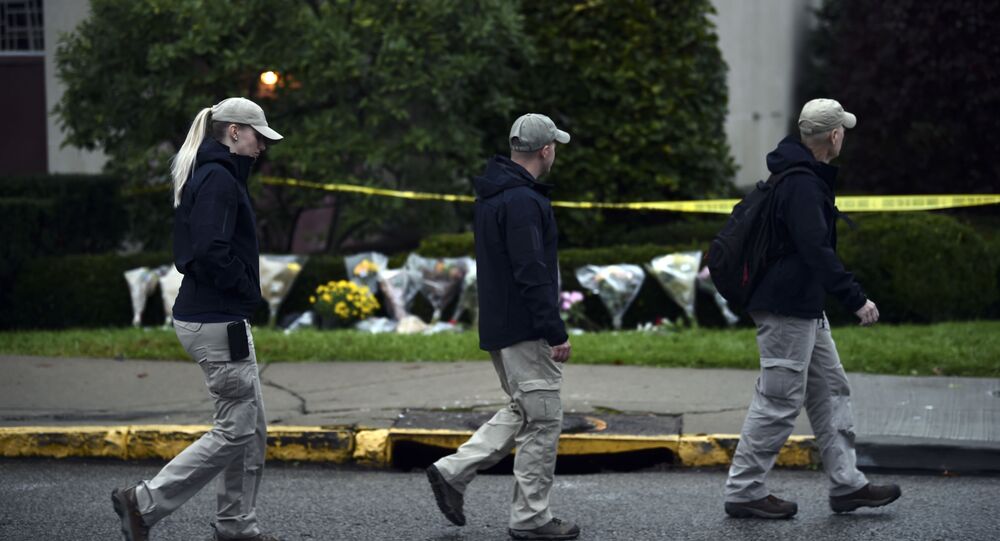 'Anti-Semitic Terrorist Attack & That Should be Main Focus' – Scholar

The US president faced hundreds of chanting protesters during a visit to the synagogue where a gunman killed 11 people on Saturday. Israeli Minister for Diaspora Affairs Naftali Bennett said that it is unfair to link President Donald Trump to the Pittsburgh attack.

Radio Sputnik has discussed this with Dr. Nir Boms, a research fellow at the Moshe Dayan Center at Tel Aviv University and the coordinator of the TAU Workshop on Israel and the Middle East.

Sputnik: Now President Trump has been receiving lots of criticism over the past few days over the Pittsburgh tragedy with some even blaming the president for the incident. We also know that there is 70,000 residents of Pittsburgh took to the streets to protest against the president's arrival into the city. What are your thoughts on this then?

Dr. Nir Boms: The issues debated in the US and some of the tensions between President Trump and the Jewish community are obviously older than the Pittsburgh tragedy and the terrorist attack over the synagogue.

© REUTERS / Cathal McNaughton
Pittsburgh Shooting Suspect Claimed 'Jews Committing Genocide' - Attorney
I think it's important to take things into perspective. There was a terrorist attack, anti-Semitic motivated attack and that's supposed to be the main issue that requires attention. President Trump made a comment at the very beginning of it, certainly ticked some of the members of the community that also has to do with the older debate about the Second Amendment the right to bear arms.

The president obviously takes the traditional Republican line supporting this saying something along the lines that somebody should have been armed in the synagogue and could have prevented it.

There are plenty of people in the United States and many Jews who do not agree with that statement. And because there are other tensions between the Jewish community and the president, all of that becomes a part of the debate. It's unfortunate in many ways because in many ways this is a bit of a distraction to the main issues that need to be debated connected to this attack in Pittsburgh.

READ MORE: Pittsburgh Massacre: A Look Inside the Politics of Polarization

Sputnik: Now some reports are pointing out that the acts of anti-Semitism have been on increase in recent years. What's your feeling with regard to this particular statement?

Dr. Nir Boms: Acts of anti-Semitism, unfortunately, made the comeback in the last number of years. We have seen a number of reports regarding anti-Semitic incidents. This is not just in America, we've seen in other places around the world. We have seen more Swastikas on Jewish institutions. The last report of the Anti-Defamation League speaks about 2017 an increase in 57 percent in anti-Semitic reported incidents and that's obviously a source of concern.

And the watchdog organizations have been following this and in some ways saying "look, we got to do more. Something eventually will happen." All of the sudden they receive the perhaps one of the worst wake-up calls in history.

Sputnik: How are acts of anti-Semitism different for Israeli and American Jews?

Dr. Nir Boms: If you look in the political scene in Israel in the last few years because of the events in the region because of the tensions with the Palestinians, the Israeli public has been moving slightly to the right. You look at the center and right on the Israeli side and if you are looking at the American-Jewish side you see almost a mirror picture. They are going from center on left. These dynamics that have been, you know, with us for a number of years have actually influenced a number of tensions between the Israeli Jewish community and the Jewish community of the diaspora. And some of that is part of what you are seeing now surrounding the events that surround this tragedy in Pittsburgh.

© REUTERS / Cathal McNaughton
Pittsburgh Synagogue Shooting Suspect Pleads Not Guilty - Reports
President Trump has been receiving some popularity here because the president before him, particularly in light of his policies on Iran, was perceived by many Israelis, by the way from the right and from the left, as the president that endangers the security and safety of Israel. And President Trump has reversed course in a number of key policies and actions including the recent move of the embassy.

Many in Israel have certainly accepted this but all of that has got little to do with the current debate on domestic policies about the right to bear arms, for example, in the United States. I think many people here would actually join the call to have more oversight on this issue.

In Israel, for example, if you compare that there is no way to buy a rifle in Walmart, certainly not a semi-automatic weapon, you have a much more strict policy of oversight on those who have the rights to bear arms. And therefore you have simply perhaps less incidents on that. It's important not to conflate, you know, every issue of domestic policy and foreign policy because not all of them have direct relation.

Sputnik: Now some experts have said that the Pittsburgh shooting has exposed a rift in Israel that does not recognize all the Jewish denominations. How serious is this problem in current day Israel to try to get a handle on?

Dr. Nir Boms: Well, that is certainly a debate and it has to do with the legislative status of the question of "who is a Jew." It's an old debate and not a new debate, and the debate became more strenuous and significant vis-à-vis the American Jewish community because the majority of the American Jewish community subscribes and belongs to the non-Orthodox denomination of Judaism, who takes a different perspective on this. Over ten or fifteen years there have been significant changes in Israel as well regarding this question. And these changes have actually shifted away from the "traditional" Orthodox position.

Views and opinions expressed in the article are those of Dr. Nir Boms and do not necessarily reflect those of Sputnik