People Have to Listen to Other Side, But It Doesn’t Happen in US – Columnist

US President Donald Trump has paid tribute at the Pittsburgh synagogue where 11 people were murdered. However, hundreds of protesters gathered on the streets to heckle him with signs and accusations of endorsing white supremacy. In addition, 70,000 people signed an open letter stating that the US President was not welcome in the city.

Sputnik discussed the issue with James Marlow, former head of news at the UK's The Jewish Weekly and now a columnist there.

Sputnik: Many have criticized Trump's timing visiting Pittsburgh, what is your take on that?

James Marlow: I do think that it's very important for the American leader, the democratic American President to be part of this. This is, actually, the worst anti-Semitic attack in the US, as I'm sure you probably know; but it's not the only one. Anti-Semitism, of course, didn't suddenly rise up two years ago; it's been around for hundreds and hundreds of years. And even in America, in the year 2006 there was an attack against the Jewish Federation building in Seattle; in 2014 there was an attack against the Jewish Community Center in Kansas, and there have been several others since.

Of course, this is the worst one, but I think what a lot of people are getting confused is — I've seen some of the tweets that have gone out in the past days since the attack — some of them seem to be directly accusing President Donald Trump of the killings in Pittsburgh, Pennsylvania. And to accuse the American President of the killings is a little like accusing Jews of the Holocaust during the Second World War.

Sputnik: Why do you think people try to politicize such a tragic event as this one?

© AP Photo / Evan Vucci
Israeli Minister: ‘Unfair and Wrong’ to Connect Trump to Pittsburgh Attack
James Marlow: I think we all know that today America is living in a very polarized society and it does seem to be getting worse. It's also happening in the UK and some places across Europe as well. I dare to say that in Russia you've also got this problem over there. But specifically in the US for some reason, people don't seem to be able to sit down and listen to the other side, which, of course, is very dangerous. You have to be willing to listen to the other side and, more importantly, you have to be able to interact on many different dimensions, and that doesn't seem to be happening.

I happened to watch a video which was sent to me on my smartphone which actually looked at — as you know we are in a run-up to the (US) midterm (elections) — and there was a Republican, she was clearly running for Congress, and she decided to say a few words; she said "Let's just remember what took place last Saturday and we'll have a minute's silence." 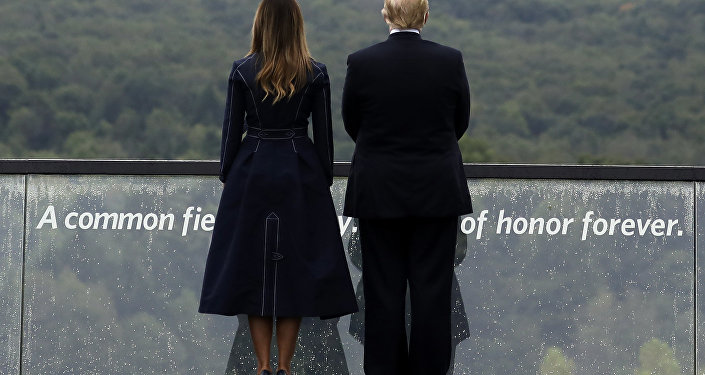 © AP Photo / Evan Vucci
US Lawmakers Snub Trump Invite to Pittsburgh After Synagogue Shooting – Reports
As soon as that minute's silence started, there were some people on the far left, presumably, those who support the left side of the Democratic Party, who started screaming, shouting and causing a great deal of disruption. This was during the memorial of a one minute silence just to remember those people dead. If you cannot actually even think or take 60 seconds off of your time to think what a terrible thing took place last week, and this is something which has been… I'm not taking any side, Democrat or Republican, I believe in a democracy, and I believe that if you agree to rules and regulations before an election takes place then you have to adhere to the result afterward.

Everyone agrees that Donald Trump won the election two years ago; if you don't like it then get yourself a good candidate and put him up or her up in another two years' time when the next presidential elections come by, and then try your luck again, and agree to the rules and regulations beforehand. But we seem to be living in a society today where we're not accepting the democratic rule of the people. We've seen that in the UK with regard to leaving the EU; we've seen that in other elections across Europe, and it's pretty scary.

Sputnik: Some experts have noted that Trump has been taking a fair portion of the blame; he's been taking the blame ever since he has become President. Whatever he does or whatever he says is tantamount to treachery by the sounds of things for 50% of the Americans.

What's your assessment of the criticism that the US President has received? He's obviously sympathetic towards the Jewish community, we know that; but his stance towards guns is obviously very relaxed, and at the end of the day if there was a stronger gun control strategy in America, these incidents wouldn't take place. I know that's a separate particular stance, but there is a strong correlation as well, isn't there?

James Marlow: Yes, there is. I'm somebody who did live in the US many years ago, for three years I was working out in Los Angeles as a correspondent and I have since lived in Israel for 12 years. I'm now back in the UK, for the last six or seven years. If you look at the difference between the British and the Americans, it's a completely different society, and most British people can't get their heads around the fact that Americans have guns; most can go into a shop and buy a gun in some states without the necessary identification or background checks.

To me personally, that's also very worrisome; but when I've raised this issue with Americans, they said "Look, it's a different cultural society, and you have to be in it to be able to criticize or condemn it." And I accept that; I do accept the fact that if you live within a gun society, you have to look at ways of protecting yourself.

The issue with regard to armed guards outside synagogues is not a farfetched thing at all; I mean Trump was condemned for that. I'm looking out for the tweet, I have to tell you, that actually says that Donald Trump was responsible for WWII. I haven't actually seen that yet but no doubt it will come. You do have armed guards outside synagogues in France, Denmark, and in Belgium where there have actually been attacks against the Jewish Community over there.

© AFP 2019 / Brendan Smialowski
WATCH Law Enforcement Give Update on Deadly Pittsburgh Synagogue Attack
We don't have that here in the UK at this time, but we actually do have a very sympathetic government in the UK that understands that Jewish institutions across the country are under threat; and therefore have put money aside every single year that is transferred over to the community security trusts which then delegate security people outside synagogues and Jewish institutions across the UK. This is something that has to be done in the US; and again, this is something that Donald Trump will back for this.