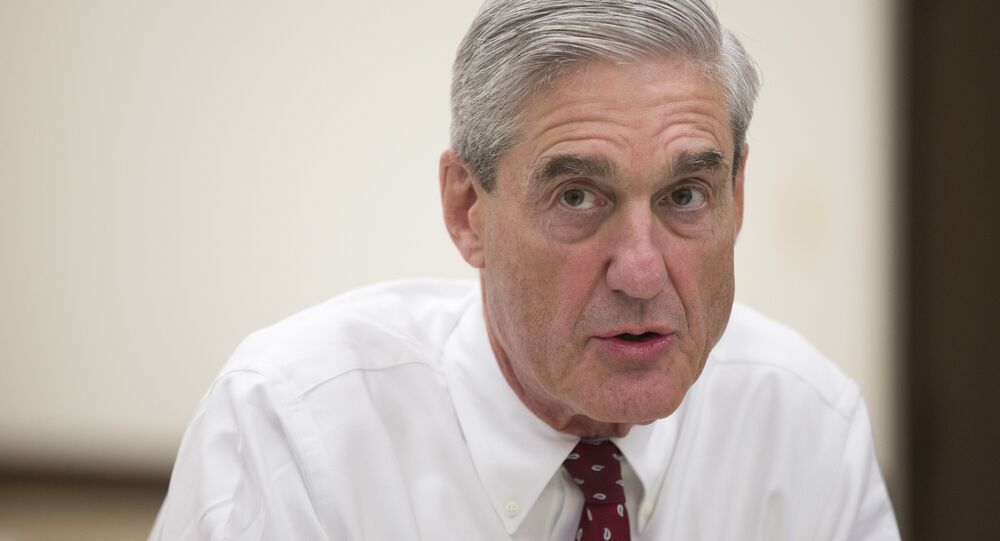 A wave of sex abuse allegations has engulfed Washington yet again. This time it's Special Counsel Robert Mueller who is in the cross hairs. Speaking to Sputnik, Wall Street analyst Charles Ortel shares his views on the alleged rape case and the entire political atmosphere in the US ahead of the midterm elections.

On October 30, accusations of alleged sexual misconduct by Special Counsel Robert Mueller emerged on Twitter, adding to the controversy surrounding the upcoming midterm elections in the US.

"Some sad news.  On Thursday, November 1, at the Rosslyn Holiday Inn at noon, we will reveal the first of Special Counsel Robert Mueller's sex assault victims. I applaud the courage and dignity and grace and strength of my client," tweeted Jack Burkman, a Republican lobbyist and the host of the radio show Behind the Curtain on Radio America.

Earlier, on October 29, The Gateway Pundit writer Jackob Wohl dropped the hint about a "scandalous story about Mueller."

Several media sources tell me that a scandalous story about Mueller is breaking tomorrow. Should be interesting. Stay tuned!

​A redacted scan of the document describing the alleged rape case at the St. Regis Hotel in New York City in 2010 involving then-FBI chief Robert Mueller was posted on the Gateway Pundit website on Tuesday but later removed. The site claims that "there is still a press conference scheduled for Thursday [November, 1] at noon in Washington, DC" on the supposed sex abuse incident.

The same day, the Atlantic's Natasha Bertrand reported about a scheme allegedly run by Burkman to discredit the special counsel and disrupt his investigation into the so-called Trump-Russia inquiry. According to the special-counsel office, two women were apparently offered money to make false accusations against Mueller.

​"When we learned last week of allegations that women were offered money to make false claims about the Special Counsel, we immediately referred the matter to the FBI for investigation," the Mueller spokesman Peter Carr told Bertrand on October 30, referring to two persons identified as Lorraine Parsons and Jennifer Taub.

For his part, Burkman denounced the allegations and vowed to unveil Mueller's "real accuser" on November 1.

© Sputnik / Leah Millis
If Kavanaugh Not Confirmed, Dems to Pay 'Heavier Price in Midterms' - Journo
The scandalous story comes on the heels of the Brett Kavanaugh sex abuse plot, and reflects the intensity of the internal political struggle in Washington.

Speaking to Sputnik, Wall Street analyst and investigative journalist Charles Ortel warned against jumping to conclusions and underscored that "allegations of rape made against anyone must be considered carefully and responsibly."

"There is, of course, a companion danger, seen most recently in the case of a political activist and lawyer's work, in theory, representing a supposed victim of now-confirmed US Supreme Court Justice Kavanaugh," Ortel said. "For reasons that are tough to understand, too many persons regularly make claims against powerful and visible people (President Trump and Bob Mueller are but two examples) that turn out to be false, or impossible to prove."

He continued that "as far as the recent claims made against Mueller are concerned, I believe we need to see more evidence to decide whether the allegations are credible — so, I reserve judgment until after the press conference concludes in the afternoon of November 1, 2018, at the earliest."

Referring to the copies of the "documents" published and then removed from the site, the investigative journalist highlighted that one needs to be "very careful assessing 'evidence,' until trained experts have had reasonable opportunities to do professional work."

He recalled that "in too many recent cases that become high profile, judgments seem to be formed concerning key issues based first upon hunches that often turn out to be incorrect."

"The charges leveled against Mueller on the 'documents' you mention, at surface level, seem worthy of further consideration," Ortel said. "Before the media and the public rush into a feeding frenzy, I think we need to discover how credible the allegations prove out to be. Did the person making the allegations retain any corroborating evidence? Were contemporaneous reports made to potential witnesses? There are many questions that deserve answers."

© AP Photo / J. Scott Applewhite
MeToo Mueller? Radio Host Touts Claims Against Mueller, Counsel Wants FBI Probe
Commenting on the heat surrounding the forthcoming midterm elections and internal political fight in Washington, the Wall Street analyst noted that "one imagines that the American people could derive much more benefit than we have derived in a system that pits two political parties against one another in perpetual bickering, yet manages to solve pressing problems, regularly."

He pointed out that the United States government spends more than $6 trillion per year (state, local, and federal governments combined).

According to Ortel, Mueller's investigation into the alleged Trump-Russia collusion raises a lot of questions. He presumed that if there were any real traces of collusion and interference, ex-FBI chief James Comey could have found it out during the inquiry that had been opened by July 31, 2016 and lasted till May 2017, when Comey was fired.

"President Obama scoffed at the possibility of interference by any foreign government on the campaign trail for Hillary Clinton, including just before the decisive Trump victory," he recalled. "I fail to understand why it was necessary to appoint any special counsel and I believe that Robert Mueller and Rod Rosenstein have conflicts of interest."

© REUTERS / Jason Reed/File Photo
#ClintonCartel: Past Records Cast a Shadow on US Special Counsel's Inquiry Into Trump
Ortel has called attention to the fact that Comey, Mueller and Rosenstein "were involved for years missing the gigantic charity frauds and possible public corruption that occurred centrally involving the Clinton Foundation, its constituent elements, and its affiliates from October 23, 1997 forward."

Returning to the upcoming elections, the Wall Street analyst underscored that now the Americans "face a new tipping point": "Should Democrats control the House, progress under the Trump administration will stop and possibly reverse," he warned. "Alternatively, should President Trump's campaign rallies and accomplishments result in Republicans retaining control of the House, bucking historical precedents, then progress likely will accelerate through November 2020."

"Much rides on development during the next few days," Ortel concluded.