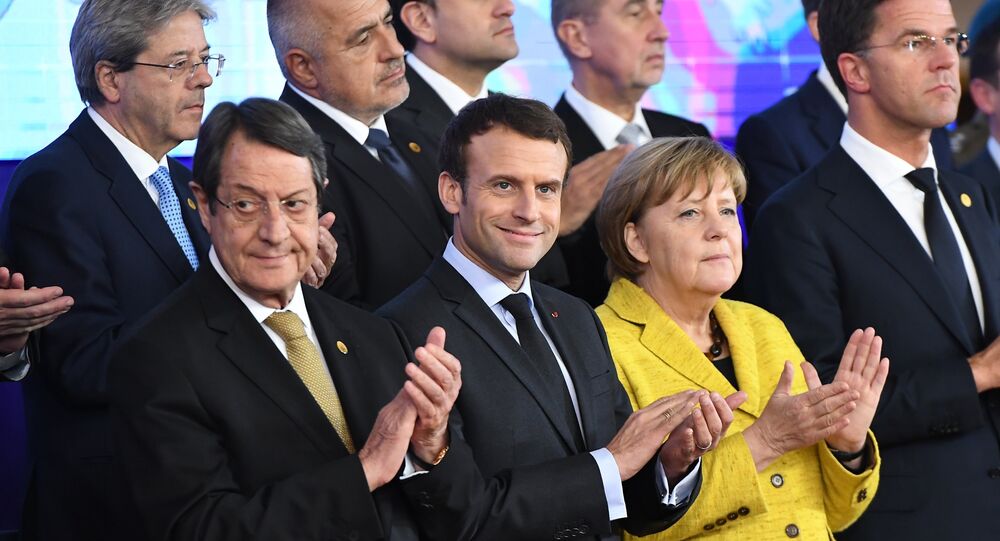 BRUSSELS (Sputnik) Luc Rivet - The revelations that only 39 percent of heavy military equipment delivered to the German armed forces last year was fit to be immediately put into service cast a shadow over the future of a self-sufficient European defense.

On Wednesday, German media reported, citing the German Defense Ministry, that out of 97 newly-delivered jets, helicopters and tanks to the Bundeswehr in 2017, only 38 were fully operational, which corresponds to a rate of 39 percent. This is to be put in parallel with the aim of the Bundeswehr, which is to have 70 percent of its weapons systems in operational readiness.

Parliamentary State Secretary for Defense Peter Tauber, in response to the pressing questions by a spokesperson for defense of Die Linke party, however assured the Bundestag that "the quality of the deliveries continues to increase."

According to Der Spiegel magazine, citing the ministry, the latter expresses special concerns over Airbus A400M transport aircraft and armored Puma infantry fighting vehicles. Four of the eight A400M are not available for immediate use. The situation with the new helicopters also looks bleak: two out of seven "Tiger" combat helicopters from 2017 are ready for use, as well as four of the seven NH90 transport helicopters.

© AFP 2020 / Armin Weigel / dpa
Germany Must Raise Defense Spending to Meet NATO Target – EU Commissioner
Leopard 2 tank, whose deliveries started in 2011, also has a major problem. It seems that many of the delivered tanks have "teething problems" and are not ready for immediate use either.

Only one of the four new Eurofighter jets can be used at present, which the ministry attributes to the retrofitting with new mainframes, saying that "a release for use of these three Eurofighter is expected soon." Even with the newly ordered assault rifles there were problems.

Commenting on the issue, spokesman for the UKIP party in the European Parliament Mike Hookem expressed great surprise about the state of affairs in the German defense industry, stressing that it makes the idea of a European defense look even more unattainable.

"I can’t believe my eyes, especially since the news comes from Germany, the champions of engineering and quality vehicles. EU defense is a bad joke when German tanks don’t work and their rifles don’t fire. We shouldn’t be surprised as the incompetent EU cannot organize an immigration policy or a Euro currency. How can we expect the EU to organize the equipping of an army?" Hookem told Sputnik.

According to Matthias Hoehn, Die Linke party’s spokesman for defense, the situation in the German defense industry has been further exacerbated by increasing rate of deliveries delays, accompanied by related additional costs.

"Armaments projects deliver late, on average 13 months later than three years ago. According to the latest Armaments Report of March 2018, the defense industry delivers 54 months later than contractually agreed. In autumn 2015, this rate was 41 months. These delays are associated with considerable additional costs: according to the German government, the current procurements are 11.7 billion euros [$13.3 billion] more expensive than originally planned," Hoehn told Sputnik.

Hoehn said he believed that that main beneficiary of all these delays was the armaments industry, with tax payers bearing the brunt of it.

"Who benefits from this mismanagement? The armaments industry. And who is liable for this policy? The citizens with their tax money… The bill is presented to the citizens, while the champagne corks pop in the executive offices of the defense companies. It is no wonder that only 37 percent of the population have confidence in the Bundeswehr," he argued.

Meanwhile, military spending only continues to rise, with the government focusing on upgrading hardware in service with the armed forces rather than repairing deficiencies in the existing equipment, according to Die Linke party’s spokesman.

"The defense budget of Germany for 2014 was 32.4 billion euros [$36.7 billion]. In 2019, it will amount to at least 42.9 billion euros [$49 billion] — an increase of over 30 percent … The current policy is not about repairing deficiencies in the equipment, as the German government likes to claim, but about upgrading: according to the Armaments Report, 199 Puma infantry fighting vehicles are in the possession of the Bundeswehr. Of these, just 48 are currently ready for use. But instead of repairing the 151 non-operational Puma, the Department of Defense once again procures an additional 151 tanks," he said.

Hoehn questioned the very idea that Germany actually needed "350 Puma tanks to fulfill its constitutional mission of national defense," meaning that the current spike in spending on defense was not fully justified and could be diverted instead to the social sector.

"Our security situation does not justify another massive increase in military spending. On the contrary, we should redirect toward one percent target. That is realistic and so doing Germany could release annually tens of billions for social security," Hoehn pointed out.

In his comments to Sputnik, French political analyst Jean-Paul Baquiast recalled that German-made military equipment in service with the Turkish army had already had some serious mishaps on the battlefield, so the current revelations threaten to deal an additional blow to the country’s military exports.

"The German Leopard 2 tank does not have flanks which are shielded enough. It makes this tank vulnerable to missiles launched laterally. As a result, in mid-January 2017, the Turkish army lost a dozen Leopard 2A4s against [the Daesh* terror group, which has anti-tank missiles in possession] in the Al-Bab region," Baquiast said, adding that it was "not a good publicity for German military exports."

© AFP 2020 / FREDERICK FLORIN
EU to Spend Some $287Mln on Defense Industrial Program in 2019
The expert noted that the German industry, in a bid "to exonerate itself from its responsibilities" for equipment’s failures, even "questioned the training of the military users, as well as the quality of the platforms of storage and maintenance set up by the army."

According to Baquiast, the current issue around the German defense industry seems very serious for Berlin, as it has always found it vital to display certain independence from external military supplies, including from France.

"In Paris, government sources explain with a smile that the German government, for electoral reasons and also under American pressure, has always refused to acquire French military equipment. This is the case with combat aircraft. While the [French] Dassault Rafale planes are considered better, Germany had imposed the development of less powerful Eurofighters, which are still practically useless," he said.

"In France, we consider these failures are partly the responsibility of the contractors of the army. But it should also be stressed that they lack the practical experience of hard-won fighting as done by the French army. The German army has asked suppliers to build unnecessarily complex ancillary equipment, which at first use is proving to be faulty and not repairable. Moreover, they had not taken into account the practical conditions of combat, in varied ground. Hence the major problems of the Leopard 2 in Syria," he said.

© CC BY 2.0 / Erik Drost / Greek Soldiers
Greek Foreign Minister Calls for Reforming EU, Creating Own Defense System
Speaking of German military exports, it is noteworthy that its Leopard 2 became very popular in the 1990s, when the shrinking German army offered many of its redundant tanks at a reduced price. It became successful enough in Europe that the manufacturer started calling it the Euro Leopard, even though European countries like France, the United Kingdom, and Italy all operate their own MBTs. With further non-European orders, the name "Global-Leopard" was used.

At the same time, the US defense industry has also been putting a lot of pressure on Germany, as well as other EU nations, to equip itself with imported US equipment. France is obviously also subject to such pressure. But in France, the industrial and defense industry strengthened under Gaullism is still powerful enough to resist this influence.